Earlier in the month, I analyzed how the sanctions from the 2015 season affected recruiting, dropping Syracuse from a perennial powerhouse into a team that was barely recruiting inside the top 100.

With that talent drop off has predictably come a drop in win totals per season. Prior to sanctions, SU was routinely recruiting in the mid-to-high 90s, with their 30 win season in the 2012-13 season with a squad whose rotation players averaged a score of just over 95 according to 247 rankings.

That average talent rating continued into the 2017-18 season, but it really started to taper off after that. The average player rankings relative to season win totals is illustrated in the chart below: 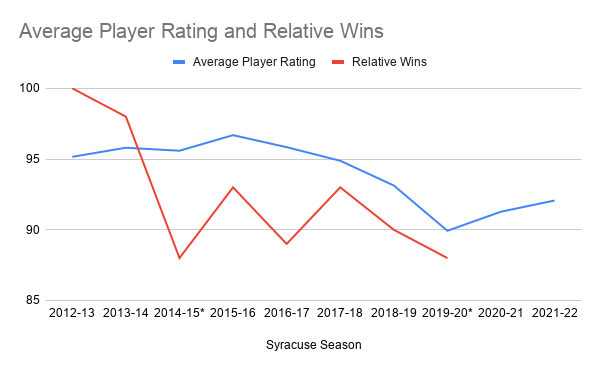 There are several things you should keep in mind when looking at this chart.

» Related: What to expect from Syracuse basketball’s bench in 2020-21

With all of that in mind, as you can see, the blue line was trending downward after the sanctions, and finally, it is trending upward. That is because Syracuse is fully past the sanctions and has resumed full recruiting activity with their normal scholarship allotment.

I had to guess the rotation for the next two seasons, since I’m not entirely sure who will be in the rotation, and I’m not accounting for future transfers and commits. I also included Alan Griffin in the 2020-21 season, counting on him getting a waiver to be immediately eligible.

This was my guess at SU’s key players for next season:

The addition of Benny Williams (98.26) also bumps up the blue line for the 2021-22 season. This was my guess at who may be in the rotation, knowing that Syracuse is still pursuing several high profile names, including Micawber Etienne (97.92), which would continue the upward trend of that blue line.

Undoubtedly, Dior Johnson (99.80) would certainly raise that blue line even further in the 2022-23 season. But it’s really hard to predict a rotation three years out, so I just kept it at two seasons in advance.

A review of the rankings also showed me that recruiting rankings are a good baseline of where an athlete stands (there are few 5-stars that turn into busts), but Syracuse has found diamonds in the rough, including Elijah Hughes (87.26) and potentially with Griffin (90.38).

Still, rankings do mean something, and talent evaluations have gotten more and more accurate over time. If that holds true, the win totals should follow, and perhaps we can start thinking about Syracuse as the team they were prior to the sanctions taking effect.

About Wes Cheng 2889 Articles
Wes has worked for Rivals.com covering the New York Knicks, as well as for Scout.com covering Syracuse athletics. Wes has also been a contributing writer for the South China Morning Post (Hong Kong), for SportsNet New York (SNY) as a news desk writer covering all of New York professional sports, and reported on the NBA and MLB for the New York Sportscene. A native of Long Island, New York, Wes graduated from Syracuse University in 2005 with a degree in journalism. Contact him at wes[at]sujuiceonline.com.
Twitter