When the NCAA sanctioned Jim Boeheim and the Syracuse basketball program back in 2015, these were the results they had in mind.

Prior to the NCAA dropping the hammer on the Orange, the program was at one of the peaks of its program history. In 2014, Syracuse won its first 25 games of the season en route to the No. 1 ranking in the country in what was its first season in the ACC.

Then in March of 2015, the NCAA announced its punishment and dropped Syracuse into a malaise that it is still recovering from. The highlights of the sanctions included:

It’s the last two that have had the biggest impact on the Orange’s bottom line. It’s no coincidence that once the sanctions started to take effect, Boeheim has had his worst win totals through any six year stretch of his career, averaging just 19.5 wins per season.

The recruiting has taken a mostly similar nosedive.

For two seasons, Syracuse was mostly able to stay ahead of the recruiting curve, with 2015 (an average recruit rating of 97.29 according to 247 Sports) and 2016 (97.99) largely consistent with their recruiting classes in the 2010s.

But from 2017 through 2020, the Orange has predictably had some of their worse recruiting classes. Their average rated recruit has been closer to the lower 90s, an unthinkable number to have for a high-major trying to compete in college basketball’s toughest conference.

The slight lag makes sense, since recruiting happens over a long period of time. Coaches first make contact with athletes freshman year (or even sooner), and while the classes of 2015 and 2016 were mostly in place by the time the sanctions hit, it took two years of the coaching staff essentially recruiting with one arm tied behind its back for everything to catch up.

» Related: With Benny Williams committed, who else is Syracuse pursuing in 2021?

Not only was Syracuse not able to have as much face time with potential recruits, they were also limited in the amount of players they could take. A key example of this was the recruitment of Kevin Huerter.

The Orange and Huerter had mutual interest in 2016, but the Orange was fresh out of scholarships because of the penalties, and wanted Huerter to reclassify to 2017 so they’d have room.

Huerter, an Albany product, instead (understandably) chose to play right away at Maryland, and was one of the best shooters in the country in his sophomore year, earning All Big 10 Honorable Mention honors. He went on to be drafted with the 19th overall pick by the Atlanta Hawks where he’s had a productive first two years in the NBA.

It’s that kind of recruit that Syracuse was consistently getting in the early 2010s, and because of the NCAA restrictions, it was the type of recruit they were missing out on. Syracuse was instead settling for their secondary or tertiary choices late in the spring such as Howard Washington and Robert Braswell.

The true impact of the sanctions is encapsulated in this chart showing the average recruit rating by class: 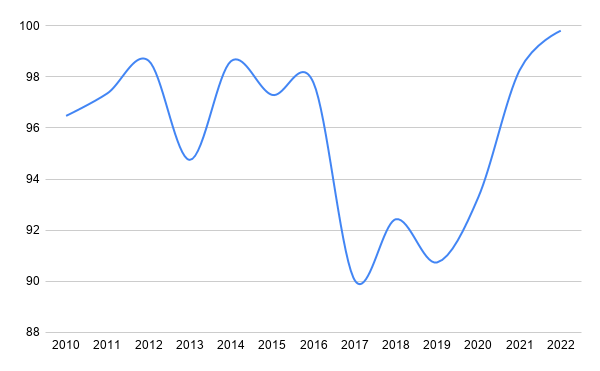 You can see how the classes from 2010 to 2016 were remarkably consistent and recruits had an average rating in the high 90s. And you can see how Syracuse bottomed out from 2017 through 2020 while the sanctions were in full effect.

(One aside here: had Darius Bazley not gone the G League route in 2018, Syracuse’s recovery timeline would’ve been sped up significantly.)

The good news is that the worst is over. Syracuse coaches have been able to recruit fully since 2018, and its scholarship restrictions ended following the 2019 season.

Now that the Orange has been recruiting on an even plane with their competitors for multiple years, the results are palpable, as you can see in the far right of the chart. In the last few months, SU has landed three recruits that very plainly and obviously show Syracuse is back as a prized destination for elite talent.

In February, Syracuse received a commitment from 2022 point guard Dior Johnson, the No. 4 overall prospect in his class, according to 247 Sports. His primary recruiter, Gerry McNamara, had established a relationship with Johnson since he was a seventh grader.

The first came from 2020 center Frank Anselem to round out a recruiting class that included Woody Newton and Kadary Richmond. While Anselem is only ranked 143 in his class, he had recently reclassified from 2021, where he was a consensus top 100 recruit with offers from Kentucky, Oregon and Arizona, among others.

The next day, Benny Williams, a 2021 wing, committed to the Orange. Ranked 37th in his class, Williams is the kind of recruit that Syracuse was swinging and missing on from 2017 through 2020. But with the recruiting restrictions behind them, Syracuse (and specifically Red Autry) was able to identify him early, recruit him hard, and land a commitment well before he started his senior year reminiscent of the early 2010s when getting a player like Williams was a yearly ritual.

With Williams and Johnson committed to Syracuse, it is an affirmative announcement that the Orange is once again a force to be reckoned with on the recruiting trail, and with more elite talent on the way (the Orange is in great position with 2021 big man Mac Etienne and 2022 guard Chance Westry), the results on the court should follow.

In a nutshell, in the very near future, the middling finishes in the ACC should be a thing of the past.

About Wes Cheng 2889 Articles
Wes has worked for Rivals.com covering the New York Knicks, as well as for Scout.com covering Syracuse athletics. Wes has also been a contributing writer for the South China Morning Post (Hong Kong), for SportsNet New York (SNY) as a news desk writer covering all of New York professional sports, and reported on the NBA and MLB for the New York Sportscene. A native of Long Island, New York, Wes graduated from Syracuse University in 2005 with a degree in journalism. Contact him at wes[at]sujuiceonline.com.
Twitter