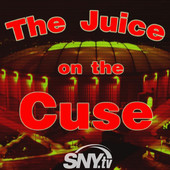 The Juice on The Cuse is The Juice Online’s podcast on Syracuse athletics recorded at SportsNet New York (SNY) studios in 4 World Trade Center in lower Manhattan. It is hosted by various members of the editorial staff and is generally released 2-4 times a month.

The show was originally called The Point After and was hosted on WERW 1570 AM in Syracuse, NY from January to May of 2005. In its previous format, it was a two-hour show that discussed major sports topics with an emphasis on Syracuse sports. It was relaunched in Feb. 2011 under the same name, and was condensed to a 15 minute podcast.

On March 1, 2012, the podcast was renamed to The Juice on The Cuse. The show regularly features Syracuse athletes, SNY personalities and other members of the sports media. Notable guests include:

Catch up on all episodes of “The Juice on the Cuse Podcast,” a Syracuse Orange podcast, by subscribing to the podcast on Apple Podcasts, Spotify, Stitcher, or wherever you get your podcasts. Or, listen to all of our episodes on The Juice Online.