No one knows exactly what to expect for next season’s Syracuse men’s basketball team. The Orange returns just two starters and must replace its top two scorers and rebounders.

The early departures of Tyler Ennis and Jerami Grant have left plenty of minutes on next year’s team up for grabs. SU will turn to the incoming freshman point guard Kaleb Joseph and Jordan Brand All-American Chris McCullough to pick up the slack. But how many minutes can we expect them to play?

As I did last year, I have created a regression model that takes into account both the RSCI rank of the incoming freshman and SU’s returning minutes played at their position. You can see the relationships between these two variables and minutes played, going back to the 2002-2003 season, in the graphs below: 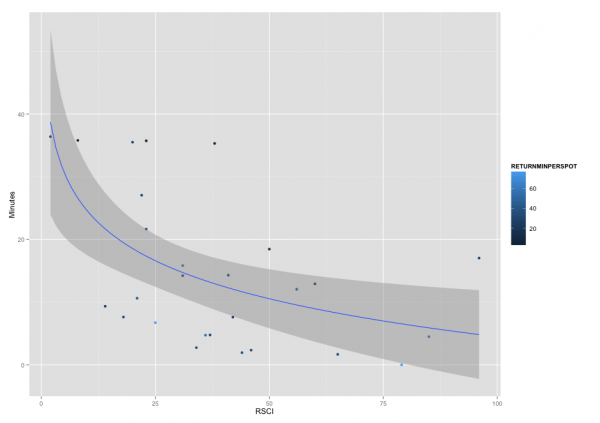 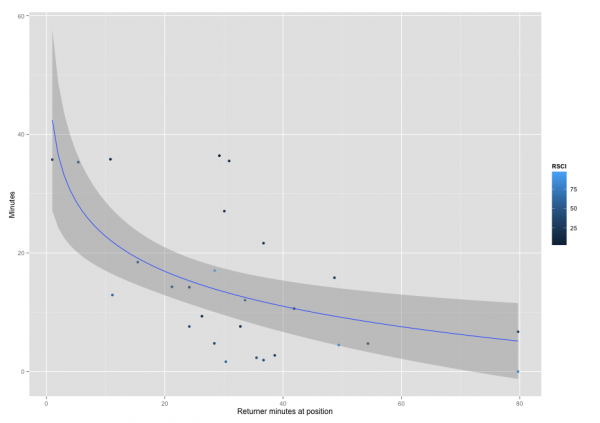 Before we go further, here are the model’s predictions for last year compared with the actual result. Note that my “minutes per game” statistic is based on total team games, rather than games played by the player, to give a more accurate impression of the player’s role on the team.

Clearly, the model is not perfect. The fact that Gbinije sat out the year before while Trevor Cooney played sparingly caused it to vastly overestimate Patterson’s role. However, it accurately predicted that Ennis would play more than 35 minutes per game while Obokoh would redshirt.

The prediction for Joseph, who is by most accounts expected to start at point guard, appears, at first blush, to be a gross underestimation. After a season of Tyler Ennis running the show, it’s easy to get used to the idea that a freshman point guard could play 30+ minutes per game. But perhaps this deserves further scrutiny.

Why is the model predicting fewer than half the minutes for Joseph than it did for Ennis the year before? The first reason is their ranks. Ennis was the 23rd ranked prospect in his class, while Joseph is No. 52. There is typically a wide talent gap between such players. For example, my article here shows why a player rated as highly as Ennis has more than twice the likelihood of going to the NBA after one year than a prospect in Joseph’s range.

The second reason is that although Syracuse lost Ennis, it still has Gbinije to rely on. Last year, the model discounted Gbinije as an unproven transfer. But this season, he is expected to grow into a larger role, splitting time at point guard.

One could imagine a situation like the one that unfolded with Brandon Triche and Scoop Jardine in 2009-2010. Triche started as a freshman and ended up playing 21 minutes per game, while Jardine played slightly more overall and often spelled Triche in crucial moments.

McCullough, on the other hand, is one of just four incoming freshmen over the last 12 years that the model has predicted would play more than 30 minutes per game. The other three were Tyler Ennis, Donte Greene, and Carmelo Anthony. Syracuse fans probably hope that he turns out to be more Anthony than Greene.

Interestingly, a large part of the reason that the model provides such a high prediction for McCullough’s minutes is the lack of returning minutes at the forward position. DaJuan Coleman was actually a higher ranked recruit in 2012, but the model only predicted he would play 17 minutes per game because of a crowded frontcourt.

On this next year’s Orange, however, what appears to the model as an open position will likely be a fierce battle for playing time. Johnson and Roberson recently finished a successful trip to Europe with the USA East Coast All-Stars for the Four Nations Cup. Past Orange alumni of the team include Brandon Triche, Baye Moussa Keita, James Southerland, Rakeem Christmas and Michael Gbinije. These unproven sophomores will challenge McCullough for playing time all season.

» More from Jeff Irvine: How Syracuse fans spend their summer says a lot

At the end of the day, my model is just a model. The players will prove their playing time on the court. But that doesn’t mean we can’t learn something from it. This upcoming season, the key takeaways appear to be:

For comparison, here is the full list of Syracuse freshmen ranked according to their number of minutes played, with predictions for the incoming freshmen in green: 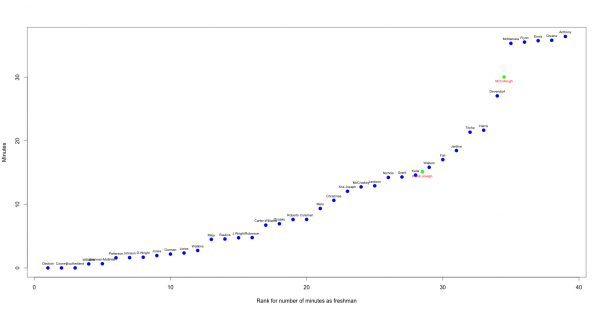