Syracuse fans got their first taste of the 2013-2014 squad last week during the team’s exhibition tour in Canada. While the overtime victory over Canadian powerhouse Carleton proved Tyler Ennis can expect to play a lot of minutes this season, questions remain about what roles the other freshmen will have.

Forward BJ Johnson averaged 18 minutes on the trip and combo guard Ron Patterson played 17.5 per contest, but three of the games were blowouts and the pair only combined for 10 minutes in the close Carleton game. Moreover, Syracuse was missing two members of its incoming freshman class – center Chinonso Obokoh and forward Tyler Roberson – who had not yet been cleared to play by the NCAA.

To shed some light on what we can expect from the 2013 freshman class, I’ve built a model to predict their minutes per game based on their RSCI rank (a combination of rankings by different scouting services) and the number of minutes played by returning players from last year’s team who play their position.

In the cases where a player can play multiple positions, such as a wing or combo guard, I have accounted for this by utilizing returner minutes per potential position. Minutes per game in this model is based on the total number of games in the season, not the number of games played by the player, to provide a more intuitive sense of how often they can expect to play.

» Related: Syracuse basketball schedule done no favors by the ACC

First, let’s examine the data. Below is a plot of minutes played by freshmen from 2002-2012 against their RSCI rank. I’ve left out players who were not ranked highly enough to appear in the RSCI top 100 because there was not a robust method of determining where they should be ranked. 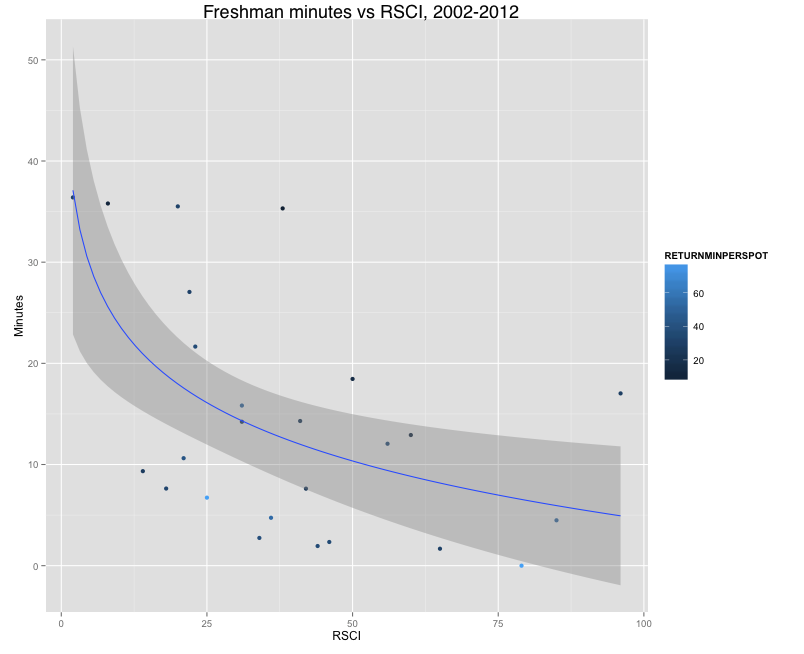 Not surprisingly, we find a nice logarithmic relationship where players with the highest RSCI ranks play a lot of minutes followed by a pretty sharp drop off in playing time for players ranked outside the top 25 incoming freshmen. Following this model, Tyler Ennis (RSCI #23) would be expected to play just 17 minutes per game, Roberson (RSCI #37) 13 minutes per game, and the other three fewer than 5 minutes per game.

The Ennis estimate clearly seems low given what we know, so let’s take a look at how the number of minutes played by returners affects freshmen playing time. I should note that I’ve given redshirt freshmen 0 minutes per game and the number of returning minutes does not include transfers who sat out a year. 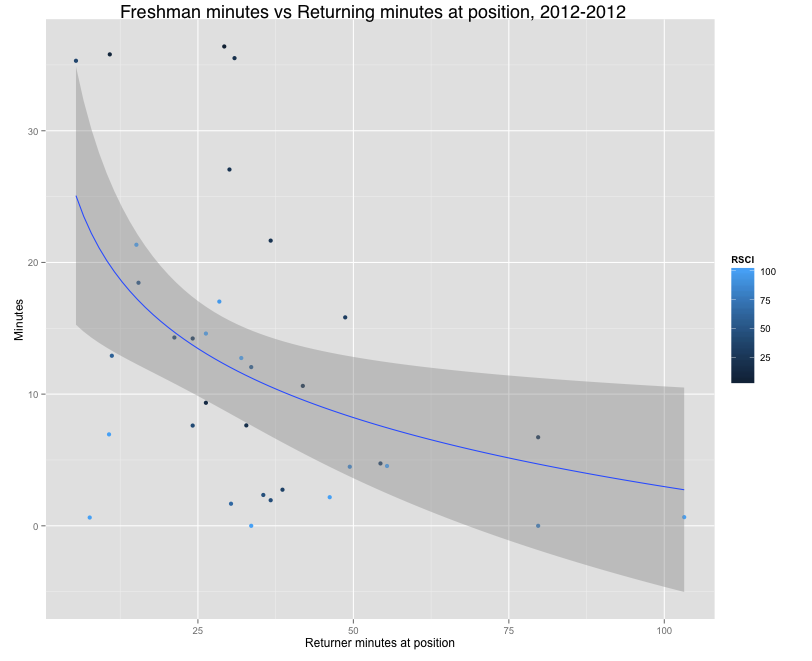 Again, we can use a logarithmic regression to see that freshmen play the most when they come into a position where there are fewer experienced returning players. There are still no surprises here, but I should point out that seven of the eight players whose minutes exceeded the 95 percent confidence interval of the regression were ranked in the RSCI top 50.

If we were to project simply based on this model, Ennis would be expected to play 31 minutes per game, Patterson 22 minutes per game because of the dearth of returning guards, and the other three between 12 and 15 minutes per game. Ennis’s minutes seem more in line with expectations, while the other’s might be too high.

For more accurate projections, I created a regression model that takes into account both the RSCI of a freshman and the returning minutes at his position. According to the statistics, this model explains 78 percent of the variation in freshman playing time. In the graph below, the red line shows what it predicted compared to the actual minutes played by Syracuse’s freshman over the last 10 years.

Based on this model, how much can SU’s 2013 freshmen expect to play? Take a look at the chart below, with incoming 2013 freshmen in green:

The first thing you might notice is that Tyler Ennis is not on the chart. The reason is that the model predicts him to play infinite minutes because there is no returning player who played meaningful minutes as a true point guard last season. Suffice this to mean that the Carleton game last week is a very strong indication of Ennis’s season to come, and he may challenge Carmelo Anthony for the most minutes averaged as an SU freshman since the national championship season.

For the remaining freshmen, perhaps the most interesting finding is that even when accounting for Patterson’s low ranking as a recruit (he was not in the RSCI top 100), the model still predicts he will play more than 22 minutes per game. However, the model does not account for transfers, so Michael Gbinije will likely eat into this number.

The takeaway for Patterson is that, even though he appeared lost at times on the Canadian tour, he will likely play more than we expect this season. The SU freshman most similar to Paterson’s projected playing time, when accounting for Gbinije, is Scoop Jardine.

» Related: What to make of Ennis’ big-time scoring for Canada

Roberson was ranked much higher as an incoming recruit than Patterson, but he only projects to play about 13 minutes per game. This is because of the experienced players in front of him on the depth chart, including CJ Fair, Jerami Grant and Rakeem Christmas. The model projects his role to fall somewhere between the playing time of Rick Jackson and Demetris Nichols in their freshman years.

Johnson is an intriguing case. The model only anticipates him to play 12.5 minutes per game – along the lines of Josh Wright and Michael Carter-Williams as freshmen. Some commentators had speculated that he might redshirt his freshman year with so many forward in front of him, but the outside shooting he demonstrated on the Canadian trip might allow him to compete for minutes along the lines of the model’s projection.

Finally, Obokoh finds himself behind three established centers, and the model projects him to only play 1.2 minutes per game in the coming season. One should never say never after DaShonte Riley played meaningful minutes in the 2010 NCAA Tournament after Arinze Onuaku’s injury. But the model’s projection for his playing time lands him in a group of six players who either redshirted their freshman season (Trevor Cooney and James Southerland) or transferred shortly thereafter (Sean Williams, Devin Brennan-McBride, Dayshawn Wright, and Mike Jones). Let’s hope he ends up following the former path rather than the latter.