With the verbal commitment of 4-star combo guard Frank Howard, Syracuse is out of scholarships for the 2015-2016 basketball season. Howard, the fourth top-70 recruit to commit to the Orange, would be a nice way to cap off the 2015 class, but Syracuse continues to recruit 5-star prospects Thomas Bryant, a 6’10’’ center, and Derrick Jones, an athletic wing.

Here’s how Syracuse will free up a scholarship to sign one of them.

Since winning the National Championship in 2003, every single Syracuse team has had a player with remaining eligibility depart before or during the season. In that time, 40 percent of non-walk-on players have left early for one reason or another.

Nine of them, or 18 percent of total SU players in that span, were drafted into the NBA. Eight of these players have come in the last seven seasons, with 2011 being the only year without an Orange underclassman in the NBA Draft since 2007.

» More from Jeff Irvine: Who will ead Syracuse in rebounding next year?

What are the chances that a member of next year’s Orange declares early for the NBA draft? Let’s start with 5-star incoming freshman forward Chris McCullough.

To estimate his chances of leaving, I examined the RSCI rank (an average of several scouting services) of all one-and-done players since the 2007 NBA Draft, the first draft in which the freshmen who declared had been required to wait a year after high school. The following chart shows the number of one-and-done players for each RSCI rank. 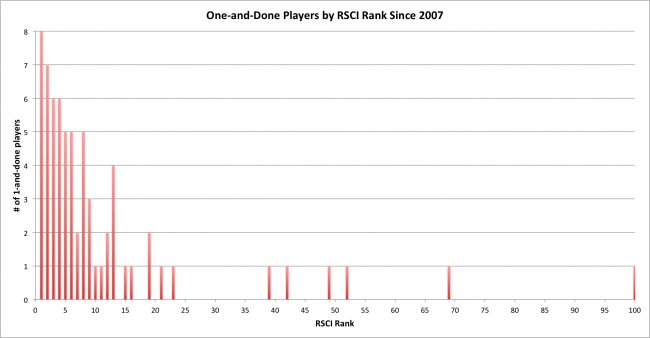 Nearly 72 percent of one-and-done players are ranked in the top 10 coming out of high school. McCullough is ranked No. 19 in this year’s RSCI rankings. To estimate his chances of departing Syracuse after next season, I applied a rolling average to the historical percentage of one-and-done’s for each rank, as shown in the chart below. 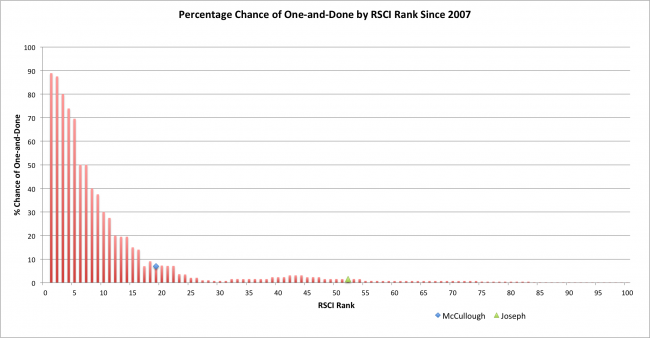 There is a dramatic drop-off in one-and-done likelihood through the top 15 players before reaching McCullough, indicated with the blue diamond. Fellow freshman Kaleb Joseph, shown with a green triangle, is ranked No. 52 and falls on the long tail. Based solely on their ranks, McCullough’s chances of going pro after next season are about 7 percent, while Joseph’s are just over 1.5 percent.

Assuming the two probabilities are independent, the probability of either or both Joseph and McCullough turning pro is about 8.4 percent. It should be noted these probabilities are probably not totally independent in reality – Kentucky has had a disproportionate number of one-and-done’s given their RSCI rankings, suggesting that when one goes many will follow.

But a one-and-done freshman is hardly the only way Syracuse could free up a scholarship. A current player could transfer like DaShonte Riley or be declared academically ineligible like Dayshawn Wright. Sometimes players leave the team for personal reasons, like Mookie Jones, or an injury, like Devin Brennan-McBride.

Since the National Championship, 22 percent of Orange players have either transferred or left the team early for other reasons, including declaring for the NBA draft and not being selected, as happened to Eric Devendorf and Paul Harris. In addition, another 12 percent have been drafted into the NBA after their sophomore season or later.

» Related: Is Syracuse basketball in for a down year?

So what are the chances that one of these scenarios plays out before 2015?

We will leave out senior Rakeem Christmas and focus on the three rising juniors and three rising sophomores. I won’t speculate who is most likely to transfer, but Tyler Roberson seems most likely to turn pro after next season. For statistical sake, we will assume the chances of each outcome are the same for all of these underclassmen.

If we account for the chances we calculated of McCullough or Joseph going one-and-done (8.4 percent), then there is a just-under 58 percent chance that Syracuse will lose at least one of its scholarship players before the 2015-2016 season.

That is why Syracuse continues to recruit Bryant and Jones. One never knows who will be the next Tyler Ennis (my model would have given him a 3.6 percent chance of turning pro prior to last season). Syracuse will continue to reload.