Around this time last year, I argued that talent was slowly returning to Syracuse after the program was hit by sanctions in 2015.

In a nutshell, prior to 2015, the Orange’s rotation players all averaged around 95, which is when the program was at the height of its power. Syracuse was ranked No. 1 in two separate seasons from 2010-2015, and also had postseason success with an Elite 8 and Final 4 run during that time period.

Following an initial grace period with sanctions, Syracuse’s talent predictably dipped. At its worst, its average rotation player dipped to 89, an unprecedented decline for one of the northeast’s elite programs. It’s resulted in Syracuse being a bubble team for the last six seasons. And while 2016’s Final Four run was certainly nice, there’s no arguing that Syracuse’s recruiting and win totals have dropped during this time, which is encapsulated in this chart: 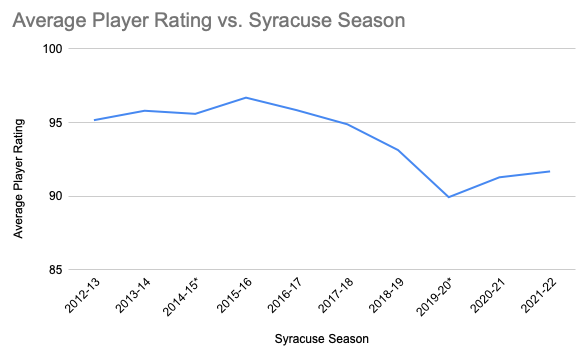 The good news is that with sanctions finally behind it, the talent level has started to pick up.

On the 2020-21 roster, Syracuse only had one player ranked inside the top 100 recruits on the entire roster according to 247 Sports: Kadary Richmond (90). On paper, Syracuse has improved in this category significantly in the offseason, adding freshman Benny Williams (27) and transfers Cole Swider (44th in the class of 2018) and Symir Torrence (75th in 2020).

That’s resulted in Syracuse’s most talented roster (according to 247 recruiting rankings) since the 2018-19 season. The upcoming team averages 91.68, up from 91.28 last year, though still far off from the mid-90s that Syracuse enjoyed for over a decade prior to 2016.

In case you were wondering, this is the raw data for the upcoming season:

» Related: Syracuse has done well in the transfer portal for 2020

There are several notes I have on the ratings:

About Wes Cheng 2834 Articles
Wes has worked for Rivals.com covering the New York Knicks, as well as for Scout.com covering Syracuse athletics. Wes has also been a contributing writer for the South China Morning Post (Hong Kong), for SportsNet New York (SNY) as a news desk writer covering all of New York professional sports, and reported on the NBA and MLB for the New York Sportscene. A native of Long Island, New York, Wes graduated from Syracuse University in 2005 with a degree in journalism. Contact him at wes[at]sujuiceonline.com.
Twitter