Earlier in the month, Syracuse basketball filled their 2020-21 roster, adding 6-foot-5 freshman Chaz Owens, son of All-American Cuse basketball legend Billy Owens. He joins the Orange as a two-star wing out of Scotland Campus in Pennsylvania.

While Owens is not expected to be an impact player at Syracuse, the last-minute pickup for the Orange had us thinking about all of the father-son duos that have put on an SU jersey over time. Below is a ranking of the best father-son Orangemen duos that have suited up for the program.

Dick Suprunowicz started for Syracuse for three seasons from 1948-1951. Although mostly known for his defense and his play while locking up NBA legend Bob Bousy at Holy Cross, Suprunowicz also managed to average almost 7 ppg for Syracuse over his three years. His son Bill also played three seasons at SU. Although he was a reserve guard who only played 20 games in three years, Bill was known for his strong defensive play.

Vinnie Cohen is one of the best forwards in Syracuse basketball history. At 6’1, Cohen was a star for the Orangemen for three seasons (1954-1957) and led them to their first-ever NCAA tournament appearance in 1957. Finishing with over 1,300 points as an Orangeman, he is part of the Syracuse All-Century team.

His son Vinnie Cohen Jr. played for the Orange for two years. Cohen Jr. would not exactly follow in his father’s footsteps, being a walk-on and barely seeing any playing time. Nonetheless, the Cohen family still left a mark in Syracuse history. 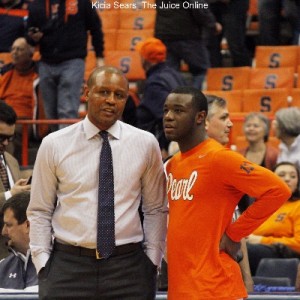 For four years in the early ’90s, Adrian Autry was a four-year starter at point guard. Being a tall guard at 6’4, Autry could do just about anything. He was an elite passer and free throw shooter, and also an above-average rebounder. By his senior year, Autry was named to the All Big East First Team and helped lead the Orangemen to four winning seasons.

His son Adrian Autry Jr. was a walk-on guard at SU for four seasons from 2015-19. What makes this father-son duo special is that Autry was an assistant coach at Syracuse for all four years of his son’s playing career.

Originally from Canada, the Rautins are a historic father-son Cuse duo. Father Leo Rautins played for the Orange from 1980-1983. At power forward, Rautins excelled being a strong post presence while still being able to handle the ball. After one season at Minnesota (where he finished second in assists to some player at Michigan State named Magic Johnson), he transferred to Syracuse for his last three years. He’s best known for his dramatic tip-in shot at the buzzer to beat Villanova in triple overtime for Syracuse’s first-ever Big East Tournament Championship.

His son Andy followed in his footsteps. Andy Rautins was not highly recruited coming out of high school, but he proved doubters wrong in an Orange uniform. Rautins played four seasons at SU and by his senior year, he was the leader of a top-ranked Syracuse team that won the Big East regular-season title. Andy Rautins was a phenomenal shooter with 282 3-pointers made in his four years, and still is ranked second all-time for most 3-point shots made in SU history.

The undisputed best father-son duo in Syracuse basketball history is none other than Jim and Buddy Boeheim. Jim Boeheim is the definition of Syracuse basketball, being both a player and coach in a career spanning more than 50 years. As a player, Jim joined the squad freshman year as a walk-on, but by his junior year, he was starting in the backcourt with SU legend Dave Bing. Boeheim helped Syracuse make the Elite Eight his senior year, averaging 14.6 ppg. His legacy as a coach includes 34 NCAA bids, 5 Final Fours, and 1 National Championship.

This father-son duo is the greatest in Syracuse history because Jim has and continues to coach his son Buddy Boeheim. Buddy is a prolific 3-point shooter who averaged 15.3 ppg on 37 percent shooting from downtown for SU last year.

About Brett Gustin 70 Articles
Brett is from Canastota, NY, and is currently attending Falk college at Syracuse University studying Sports Analytics. Being a Central New York native, Brett has been passionate about Syracuse sports for his whole life. He covers all Syracuse athletics.