Last week at The Juice Online we pontificated about a 16-player tournament for former Syracuse players and their NBA careers. We took the best 16 NBA careers for Syracuse alums of all time and put them through the test, advancing each player through the Sweet 16.

As a friendly reminder of the rules for this exercise, what happened at Syracuse doesn’t count. Guys like Pearl Washington, Lawrence Moten and Leo Rautins had great SU careers, but didn’t make much of an impact at the next level and weren’t included in this bracket.

When we left off on Monday, we were left with these matchups for the Final Four: 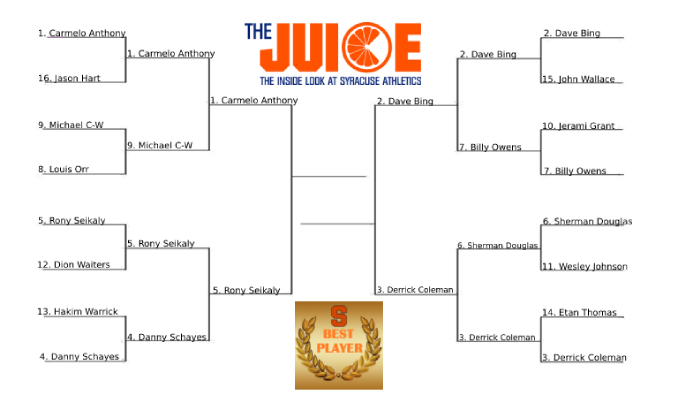 With all that in mind, let’s get to the semifinals!

The Win Shares are similar (68.8 for Bing, 64.3 for Coleman). Coleman was second among Syracuse players in all-time rebounding with 7,232. But, in three less seasons, Bing scored over 6,000 more points than Coleman, without the use of a three-point line. Bing became one of the 50 greatest players of all-time in 1996, while Coleman didn’t live up to the expectations that were set when he came into the league. BING ADVANCES.

And so, as it was meant to be, the title for Best NBA Career by a Syracuse Player comes down to Bing and Melo… 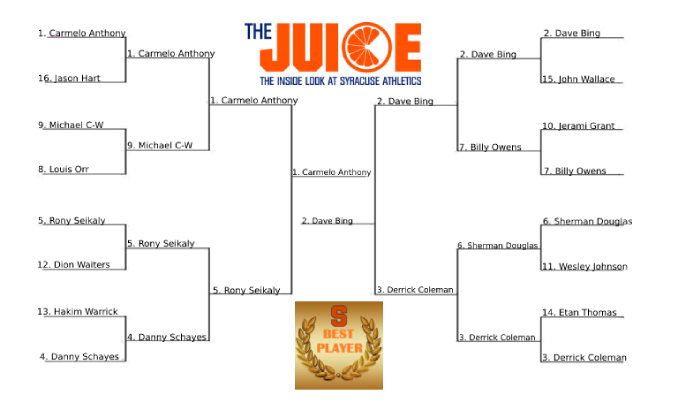 Anthony (23.6 PPG) and Bing (20.3 PPG) are the only two Syracuse players to average 20 points a game in the NBA. Neither player has won an NBA title. But, Bing is a Hall of Famer and Anthony will be one day. Bing is a Top 50 all-time player. Anthony has probably moved into that category since then.

But here’s where the two players start to separate. Bing was an eight-time All Star, Anthony has been to the All-Star game 10 times. Bing’s win shares total was 68.8, second on the list. Anthony is first with 102.0 and counting.

Anthony’s career has already lasted five seasons longer. His 26,314 points are 13 points shy of 8,000 more than Bing, putting Anthony 20th on the all-time scoring list. And to boot, Anthony is the most decorated Olympic basketball player, becoming the only player to take home gold in three different Olympics and holds the record for most Olympic games player, with 31.

By most all accounts, Anthony’s special season in college vaulted him to an NBA career unlike any other that we’ve seen from a Syracuse player. ANTHONY WINS.

And with that, here’s our final championship bracket. Thanks for following along, Orange Nation! 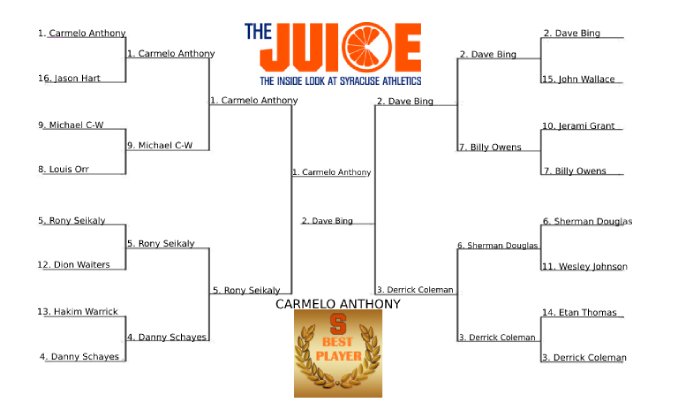 About Matt Dagostino 113 Articles
Matt currently works as an on-air talent and producer for Turner Sports in Atlanta, where he is from. Among his responsibilities are voicing over highlights for NCAA.com, NBA.com, WNBA.com, and PGA.com. He has also served as an associate producer for TNT’s coverage of the NBA Playoffs and TBS’s coverage of the MLB Postseason. Matt also has experience as a minor league baseball play-by-play announcer and as a PA announcer in D-I college athletics. Matt graduated from Syracuse University in 2005.
Twitter