While the world has been without sports the past few weeks, many publications have been looking back at some of the best moments, players and games of the past.

Recently, the Atlantic Coast Conference made a bracket of the best conference players of all-time. Placed to a fan vote, the final four players all hailed from Syracuse (good job, Orange fans!).

And, despite none of the four players actually playing in the ACC, Carmelo Anthony, Pearl Washington, Derrick Coleman and Billy Owens faced off against each other.

One last time… Who ya got?

That bracket has now led to this: Which Syracuse players enjoyed the best NBA careers?

So, throw out what happened at Syracuse. It doesn’t matter for this exercise. So, guys like Pearl Washington, Lawrence Moten and Leo Rautins? Sorry… they were great in central New York. But, their NBA careers didn’t come to full fruition.

Based on factors such as statistics, advanced statistics, longevity, awards and accolades, the list of 53 Syracuse players who have played in the NBA has been pared down to 16. Seeded one through 16, we’ve gone through all the matchups to determine who reigns supreme: 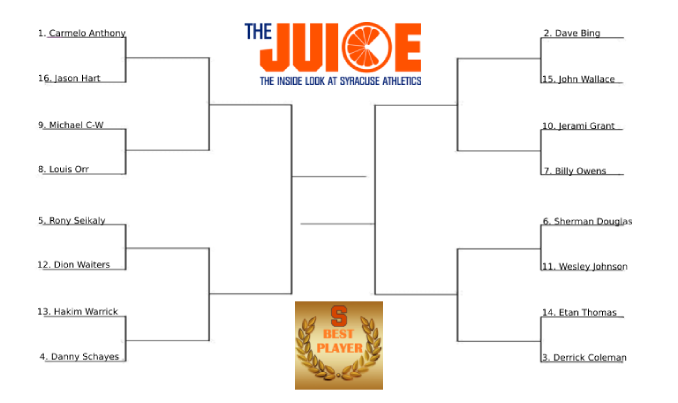 Despite playing nine seasons in the NBA, Jason Hart has the fewest games played of those in the bracket, with 341. The only two Syracuse players who played at least 300 NBA games that did not make the cut were Rafael Addison (379) and Bill Gabor (307). And, while he scored less points than both Addison and Gabor, Hart had far more assists and steals to give him a slight edge. Either way, none of those guys came close to stacking up to Carmelo Anthony. ANTHONY ADVANCES.

One half of the “Louie and Bouie Show”, Louis Orr, goes up against Michael Carter-Williams, who surprised even the guy who made the seeds (me) at where he landed. Orr, who played seven NBA seasons, had nearly 2,000 more career points, over 500 more rebounds and beat Carter-Williams 25.7 to 7.0 in Basketball Reference’s Win Shares stat (an estimate at how many wins a player was responsible for throughout his career).

Carter-Williams owned the assist columns (1,565 to 853). But MCW holds two trump cards: 1) the 2013-2014 Rookie of the Year award and 2) nine Syracuse players averaged double figures in the NBA. Eight of them made the bracket, all but Eddie Miller and his 10.2 PPG average from the 1953-54 season. Carter-Williams has averaged 10.4 points in his NBA career, edging Orr’s 9.7 points per game.

Who woulda thunk Carter-Williams has averaged that many points, including 16.7 per game in his rookie season? Not me. But, Carter-Williams pulls off a bit of an upset. CARTER-WILLIAMS ADVANCES.

While Dion Waiters has averaged 13.2 points a game in his NBA career, the same problems that plagued him at Syracuse (shooting percentages) have hurt him in the NBA. Waiters has only been a 34 percent shooter from beyond the arc as a professional. But, perhaps more than his on-court play, his off-court issues have tarnished Waiters’ career.

This year alone, the former No. 4 overall pick has been suspended multiple times by the Miami Heat for being out of shape and for eating edible marijuana on a team flight that caused him to have a panic attack. No 5-12 upset here. SEIKALY ADVANCES.

Hakim Warrick put together a solid eight-year career as a rotational player in the NBA for six different teams. But, his stats pale in comparison to Schayes’, who played 18 seasons in the league. SCHAYES ADVANCES.

Wesley Johnson played just one season at Syracuse before becoming a surprise No. 4 overall pick by the Minnesota Timberwolves and had played in the NBA all the way up until this season. Douglas was the 28th overall pick (which was the second round back then) in 1989, but was a starting caliber player for much of his career.

Douglas (5.9 APG) averaged more assists per game than any Syracuse player other than Dave Bing (6.0 APG). Douglas’ 32.9 win shares was nearly three times as much as Johnson’s. DOUGLAS ADVANCES.

Perhaps the best at blocking shots and starting a fast break for his team, Etan Thomas can lay claim to that and his gift for poetry. But, in a battle of two of my favorite SU big men, Coleman was far superior in terms of production on the floor. COLEMAN ADVANCES.

Billy Owens was a No. 3 overall pick. Jerami Grant was picked 39th. Owens has the superior stats across the board at this point. But, if this bracket were done in again in, say, five years, we may be singing a different tune. As one of only four players on this list to wear an NBA uniform this season, Grant is finding his niche with the Denver Nuggets.

He has started 99 games the last two seasons between the Nuggets and the Oklahoma City Thunder, compared to just 72 starts in his first four seasons combined. Down the road, Grant will probably be seeded better than his current 10-seed and may fare better in the bracket. But, for now Owens takes the win. OWENS ADVANCES.

Speaking of favorites, I sit here and write this as I wear my 1996 Syracuse basketball shorts. So, Wallace was certainly the favorite SU player of my childhood. But, Wallace played just 381 games in the NBA, while Dave Bing was third among Syracuse players all-time with 901 career games. The stats are not even close. BING ADVANCES.

So to recap, in the first round, only one upset, and that was in the 8-9 matchup: 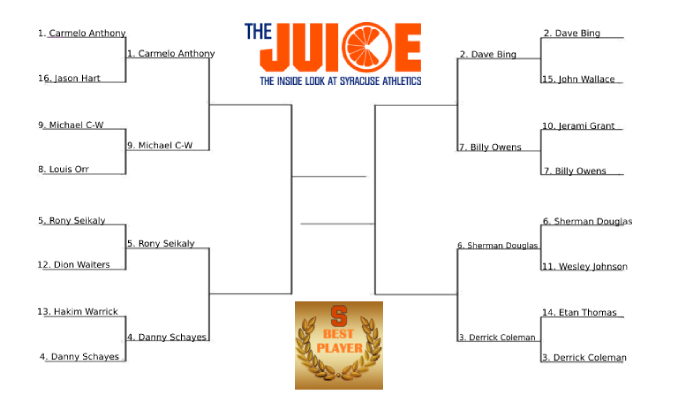 Things get a little harder as we move the second round. Make sure to check back in later in the week to see how the Elite 8 matchups go!

About Matt Dagostino 100 Articles
Matt currently works as an on-air talent and producer for Turner Sports in Atlanta, where he is from. Among his responsibilities are voicing over highlights for NCAA.com, NBA.com, WNBA.com, and PGA.com. He has also served as an associate producer for TNT’s coverage of the NBA Playoffs and TBS’s coverage of the MLB Postseason. Matt also has experience as a minor league baseball play-by-play announcer and as a PA announcer in D-I college athletics. Matt graduated from Syracuse University in 2005. Follow him on Twitter @MattDags28.