It’s that time in August when basketball recruiting news shifts from summer tournaments and evaluations to official visits and commitments. It’s also the time when Syracuse fans begin their perennial worryfest that the Orange doesn’t have enough verbal commitments for the following year’s freshman class.

Syracuse got an early start on the 2019 class. Four-star Brycen Goodine committed back on September 13, 2017. Goodine was so early he even beat two members of the 2018 class – Robert Braswell and Jalen Carey. But since then, it has been all quiet on the commitment front.

Is this normal? To provide context, I am reprising and updating an article I published back in 2016.

There are currently 131 days before the start of the calendar year in which the 2019 class will enroll at Syracuse. Since 2002, 49 percent of Syracuse’s commitments (including those that did not work out, such as Moustapha Diagne and Darius Bazley) have come later than this.

Recent commitments in this time period include Kaleb Joseph (August 17), Tyler Ennis (August 16), and Buddy Boeheim (September 8). You can see where we are relative to all of SU’s commitments since 2002 in the chart below. The names at the far left of the diagram were late commits, while those at the far right were early.

With names like Taurean Thompson, Marek Dolezaj and Robert Braswell at the far left – and well into negative territory, meaning they committed after the new year in their senior year of high school – it’s easy to assume that Syracuse’s recruits have been committing later and later.

But the data do not bear this out. In fact, there average commitment date to Syracuse has barely budged in the last 16 years, as shown by the chart below. The red linear trend line is sloped slightly downward, but this is not statistically significant. 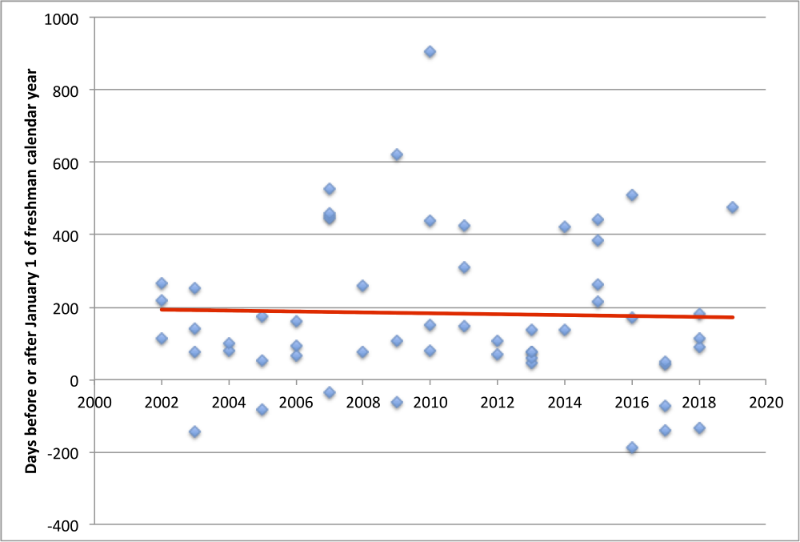 In fact, although the median commitment date is 137 days prior to new years (roughly August 17), August isn’t even Syracuse’s best month for receiving commitments. Neither is September. The Orange has had the most success in October, and November isn’t far behind. 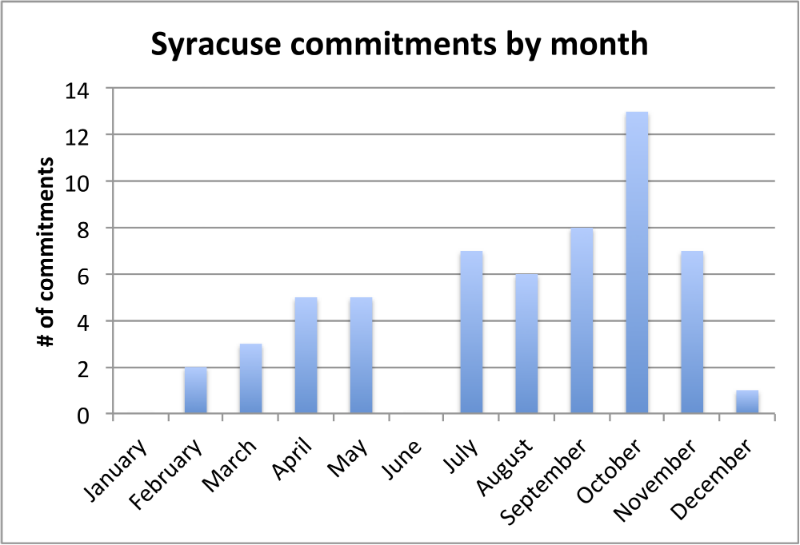 So don’t sweat it if the Orange ends August with a one-man recruiting class. Coveted prospect Quincy Guerrier is taking an official visit to Syracuse on September 21. Another Top 100 SU target, Qudus Wahab, will be on campus on September 8. Local recruit Joe Girard III has already visited.

It won’t be long before Syracuse has its next commitment.