It’s mid-August, and the Syracuse men’s basketball team has yet to receive its first verbal commitment from a recruit for the 2017 season. It is unusual for the Orange to not have a commitment at this point in the recruiting cycle, but it is hardly unprecedented.

The last time that Syracuse had to wait this long for its first recruit was 2012. Jerami Grant verbally committed in September, and his sole classmate Dajaun Coleman followed with an announcement a month later.

But what is disconcerting for the Orange this time around is that the team could lose up to six players before next season. Coleman, Tyler Roberson and graduate transfer John Gillon will finish their eligibility. Coach Boeheim has said he expects Tyler Lydon to enter the NBA draft. The same could be said for highly rated incoming freshman Tyus Battle. If SU manages to land graduate transfer Andrew White III, he will be gone, too.

To fill all available scholarships the Orange could add seven new players in 2017. The largest addition in the last 15 years was six in 2007 when Kristof Ongenaet joined a quintet of highly ranked freshmen.

But that season Syracuse had Donte Grene, Rick Jackson, Scoop Jardine, and Jonny Flynn committed by October 2005 – more than two years before their freshmen season would begin. Only Sean Williams committed during the spring of 2007.

Just how normal is it for Syracuse to have no commitments by mid-August the year before a class will start playing? Since the year Carmelo Anthony committed, it has only happened two times: 2004 with Josh and Dayshawn Wright and 2012. It would be three if you count the 2013 class in which Tyler Ennis was the first to commit on August 16, 2012.

But the fact that most Boeheim recruiting classes have at least one early commitment hides the fact that we are just now entering the prime time for verbal commitments. Of the 48 commitments since 2002 (including Moustapha Diagne), 53 percent have committed in August or later. The median commitment date for all recruits is approximately August 9.

You can see the spread of commitment dates from various players in the chart below: 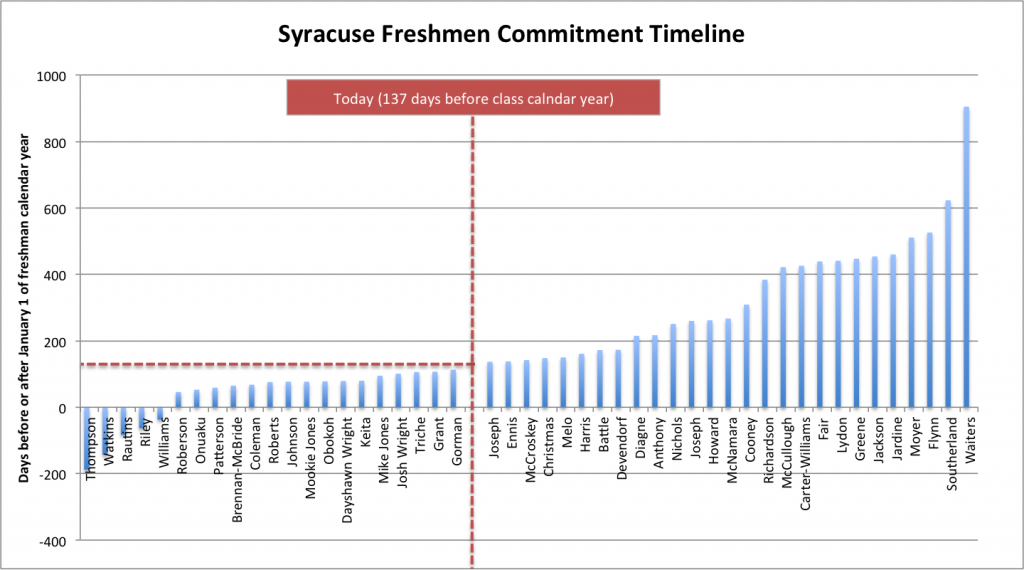 We are currently right at the state where Kaleb Joseph committed – 137 days before the calendar year of his freshman year. We are approaching the time of the year when Grant, Brandon Triche, Mike Jones, and Josh Wright committed.

But if the Orange has not locked up several recruits by Thanksgiving, then it is time to grow concerned. Only three recruits since 2002 have committed during the spring of their high school senior year: Darryl Watkins, DaShonte Riley, and most recently Taurean Thompson.

Syracuse is in a strong position with many top 2017 recruits, including 5-star talents Hamidou Diallo, Quade Green, Nick Richards, and Lonnie Walker. The Orange has additionally shown interest in six or more 4-star players. Given all of these targets, Syracuse is likely to get the first piece of its 2017 class soon.

Commitments most often happen on or shortly after a visit to campus. This is why it is especially encouraging that 4-star sharp shooter Alex O’Connell has set an official visit for September 16. He has held an offer since June when he took an unofficial visit to campus. If he is impressed in September, he will likely be SU’s first commitment for 2017.