Syracuse fans can be a fickle breed. If there is anything this year’s football and basketball seasons have taught us, it’s that when the teams are winning we think they’re awesome, and when they’re losing we think they suck. There is no middle ground.

That’s why it comes as no surprise that talk of title contention during the basketball team’s 18-1 start has quickly turned to talk of how they’ll be bounced in the first round of the tournament after the recent three-game losing streak.

We’ve thought up qualitative explanations, whether it’s the crisis of leadership, the lack of a “go-to” guy, or the lack of mental toughness. Looking at the team, all seem fairly reasonable.

» More from Jeff Irvine: Sharing the ball leads to success

Syracuse has a baseline of talent, and chances are that it hasn’t changed significantly over the course of the season, let alone the last three games. The variations in results we see on the court have much more to do with the talent level of the opposing team.

Also, much as us fans and commentators might hate to admit it, there’s a lot of luck involved in a college basketball game. Bad calls can change the way the game is headed just as much as a bad bounce.

While we’re quick to forget those things when we’re screaming at the TV, they raise the question: has Syracuse really been doing any worse than we should have expected?

Let’s explore this question in pictures.

The chart below compares Syracuse’s margin of victory to the ranking of their opponent (an average of RPI, BPI and KenPom) for all Big East games. As you can see, based purely on the skill of the opponent, each of the last three games Syracuse played (red squares) should have been close, and, in fact, they would be expected to lose all of them. 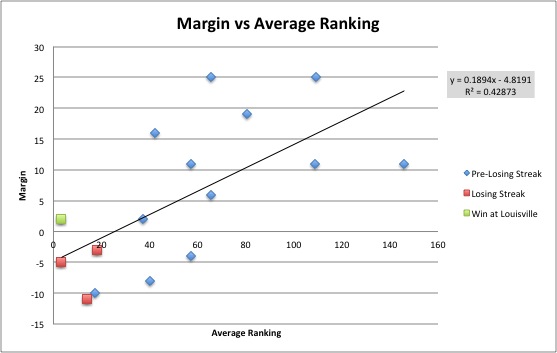 There is, of course, some margin of error, and you would expect to see variations based on random bounces, refereeing and other extraneous factors. That is how we can explain the win at Louisville, which is the green square that sits above the trend line.

But what about accounting for the fact that some games are played at home and some on the road? Against the three Big East teams that Syracuse has played at home and on the road (Louisville, Providence and Villanova), the average swing is +13.67 at home. This seems way too high to me, and is likely due to the small sample, so I’ve created an adjusted margin to normalize the outcomes that provides -5 to home margins and +5 to road margins.

» Related: A statistical analysis of Syracuse in close games

As you can see in the chart below, this adjusted margin correlates even better with the average rank of the opponent. It suggests that Syracuse somewhat under-performed in home losses to Louisville and Georgetown but somewhat over-performed in the close road loss to Marquette. 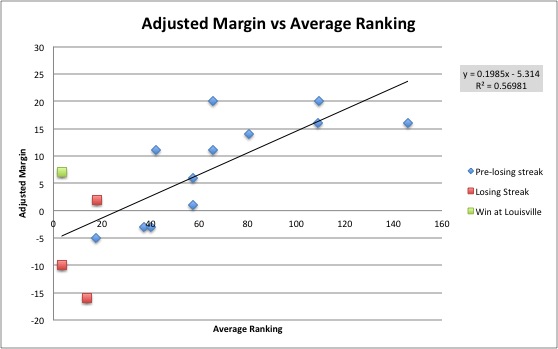 But the point of all this is not to get into what “should” have happened. The point is that Marquette, Georgetown and Louisville are all good teams and we should have expected the games to be close, based on SU’s talent level this year. The fact that they ended up losing all three can be explained by some unlucky bounces, a few bad calls, and some boneheaded plays that were just as likely to happen in SU’s wins as its losses.

If you start to get into talking about how these losses were a failure in leadership or a lack of mental toughness, you need to explain why this failure in leadership and lack of mental toughness caused Syracuse to over-perform in its win at Louisville. Or why those traits caused them to pull out a close win against Cincinnati, almost exactly was we should have expected. Or why the team so drastically over-performed against Notre Dame.

The last thing I’d like to point out is that these types of correlations exist for more than just margin of victory. Take defense, for example. Georgetown and Louisville are both really good at defense, and thus we would expect Syracuse to produce fewer points per possession. That’s exactly what the chart below shows, with the two red squares in the bottom left representing those games. 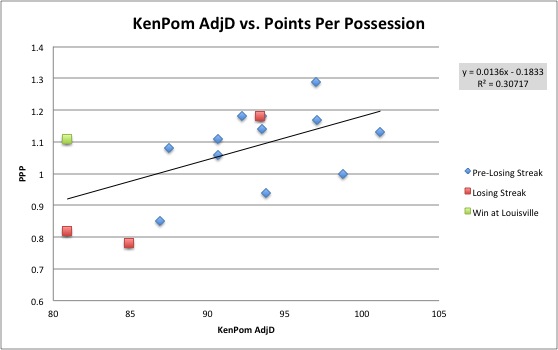 Come tournament time, Syracuse will go about as far as their talent level will take them. This is the same talent level they’ve had all year. That should excite you. If there’s one thing that Syracuse has proven this season, it’s that it can beat anyone. We’ll just need some bounces to go our way.