From the moment Syracuse and Notre Dame tipped off on Monday, it was clear the Orange had modified its strategy to involve more players in its sputtering offense. Jerami Grant started the first possession by sinking a smooth fade-away, and Rakeem Christmas quickly followed with a turnaround jumper. The result was an easy 16-point victory, but a look back over the season shows that Syracuse has consistently fared better the more it has shared the ball.

While the Boston Celtics made “The Big Three” a household name, Syracuse has its own Three Amigos who carry the team. CJ Fair, Michael Carter-Williams and Brandon Triche have taken 54 percent of the Orange’s shots this season. Since the James Southerland suspension, they have taken a whopping two thirds of the team’s shots.

But with volume does not come success. The chart below shows the threesome’s share of SU’s field goal attempts plotted against the team’s margin of victory in all games against Big East teams and non-conference opponents in the RPI top 100. As you can see, the more shots they take, the worse SU tends to perform. The linear trend line shows that the three players’ shot share explains roughly 73 percent of the variation in margin of victory.

» Related: Syracuse made key adjustments to get offense going

Of course, correlation does not equal causation. It’s fairly likely that SU’s best three players take more shots in close games because the games are close, not the other way around. However, by plotting opponent RPI against shot share, you can see that while Fair, Triche and MCW tend to take a few more shots against better teams, it’s not significantly more than their share against worse teams. The opponent’s RPI only explains 43% of the variation in their shooting. 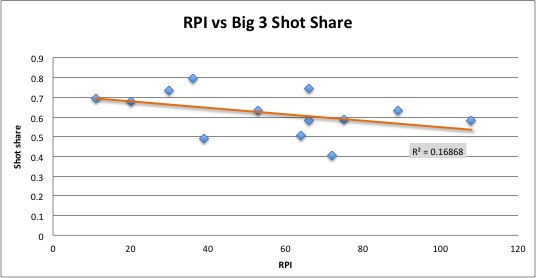 Additionally, as shown in the chart below, the team as a whole tends to shoot worse when Fair, Triche and MCW have a high shot volume. This is not terribly surprising considering that Triche and MCW have two of the worst field goal percentages on the team, but it reinforces the point that the team will struggle if they try to do it all.

Against the Fighting Irish, Christmas and Grant combined for 17 shot attempts and made 12, both season highs for the duo. Fair, Triche and MCW only took 48 percent of SU’s shots, the lowest in a game against a top-100 opponent since Detroit. And in that game, Southerland attempted 12 shots.

If Syracuse wants to finish the season strong, they would be wise to continue feeding Christmas in the low post and finding Grant at the top of the key. They can’t score, after all, if they don’t get the ball.