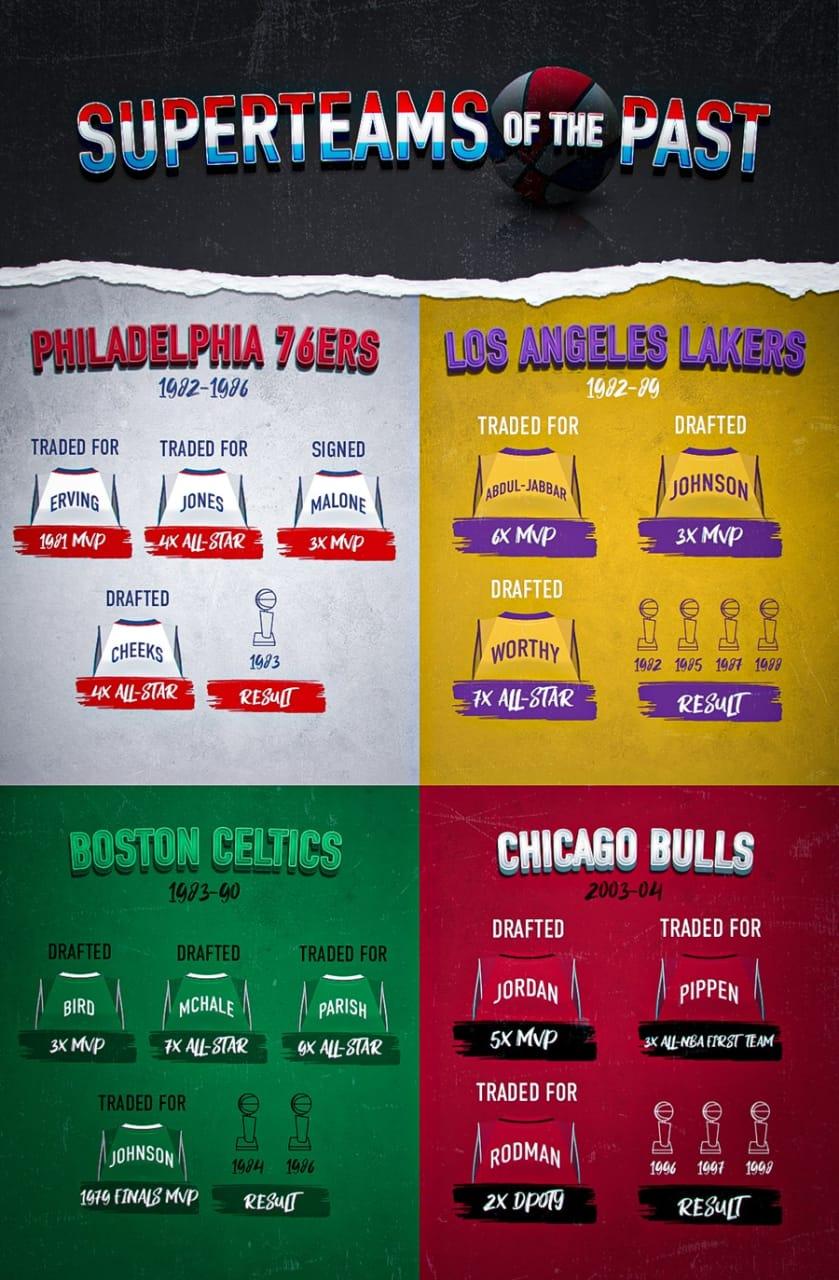 Spanning across the USA and Canada, the NBA is a men’s professional basketball league with 30 teams formed in the summer of 1946.  Fans are always excited when the action is rolling down, but the story is different when supper teams face each other. Since its inauguration over 70 years ago, the NBA is the richest source of fine brewed teams.  These teams have traveled through ups and downs, defending their positions to be known today as super teams.

There is nothing that ignites a fan other than seeing his team win the championship. These are teams that collectively homed some of the finest NBA  success-oriented stars. What are these teams?

Boston Celtic reigned from 2007 to 2011.  During those four years, Celtic crashed its opponents on a hardened anvil. The 5- time all-star Paul Pierce pierced through the opponent’s defends, dunking as many shots as he wished. Celtic’s futuristic success began in 2004 when they acquired a homebred sharpshooter Ray Allen and a solid blockbuster Kevin Garnett from Seattle SuperSonics and Minnesota Timber Wolves respectfully.

When Cleveland crowned their former King James, they welcomed new dawn.  James, Kyrie Irving, and Kevin Love was a lethal combination of star players who will spell doom to Cavaliers opponents.  LeBron from the Big Three later joined this deadly trio, but unfortunately, they could match Golden State Warriors in their finals. But the following year, 2016, Cleveland won the championship after five decades of failures.

These are arguably NBA’s warriors. Smashing Cavaliers in 2015, these warriors went on a one year recess when Cleveland Cavaliers denied them a win. This 2016 summer’s super team had an ingenious trio of Steph Curry, Klay Thompson, and Draymond Green dragging NBA’s underdogs mercilessly. Curry won the previous three league MVP awards; hence he was a useful asset to Warrior’s successful missions.

Perhaps it is these super teams of the past that inspired the current stars to always achieve the highest honors. Let us look at the past NBA’s tyrants.

Philadelphia 76ers is among a few examples of the previous era’s super team with its elite players converging for success. In the summer of 1982, the 76ers dropped off from the championship for Los Angeles Lakers, but they overturned their situation in the following year, creating a row of successful wins to 1986.

Lakers magical duo Magic Johnson and Kareem Abdul- Jabbar helped them win the 1980 and 1982 titles. They went on break, later returning in 1985, 1987, and 1988 to reclaim their position.  But by 1989, age had taken a toll on most of its players ending their decade-long reign.

Back in 80′ s Boston Celtics threatened to drain the mortal enemy Lakers if they challenged their supremacy! Celtics ruled amid their key enemy Lakers sovereign era from 79 to 82 with their key Player Larry Bird cementing their victory. They won 1981, 84, and 86 titles.

When it came to sheer power and tearing opponents with terrifying horns, Chicago Bulls took the credit. Michael Jordan and undetermined James Rodman held the Bulls by their horns and led it to the ruling chair, where they were crowned five times in the 1990s.

There is an epic battle to attain the superteam’s position! Unfortunately,  two kings can’t rule in the same kingdom; hence dethrone superteams have no otherwise but to spectate.

The 1998 trade of star players made an impressive impact on the Rocket’s fuel system, and they couldn’t match the NBA’s speedy young stars.  That was the beginning of their fall.

Disagreements between Bryant, O’Neill, and other players disintegrated Laker’s team unity, and they were susceptible to losses. That is why the 2003- 2004 season passed by, with the Lakers having the least impact impossible.

Ten years later, aging star Bryant and multiple injuries left the Lakers with no choice but to let Miami Heat warm the fans.

When glory leaves you, even supernatural power can’t change the situation! That is what happened to Thunders when they lost Durant. They have tried severally to get another trio that matches Durant’s capabilities, but it seems their fate was sealed 2017-2018 season when they were eliminated at playoff by Utah Jazz.