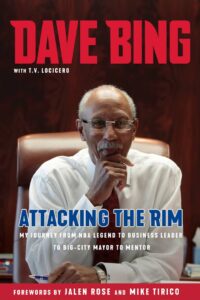 Item: In his upcoming autobiography, “Attacking the Rim,” to be released this month (with forwards featuring a ‘Michigan flavor’ from Jalen Rose and fellow SU alumni Mike Tirico), arguably the greatest player in Orange basketball history opens up over 15 chapters of a page- turning retrospective. From his upbringing in Washington, D.C., how he ended up playing at Syracuse, his teammate and roommate Jim Boeheim, going on to a Hall of Fame, 12-year tenure in the NBA, followed by a longtime hugely successful business career founding Bing Steel which transformed to Bing Group, and the compelling political trail to become the Democratic mayor (2009-2013) of Detroit.

It may be hard to believe with what has transpired to the Syracuse football program over the majority of the last 60 seasons, but thanks to Ben Schwartzwalder’s quarter century of success from 1949-1973 (and two, decade-long runs by Dick MacPherson and Paul Pasqualoni, respectively), Syracuse used to be known nationally as a “football school.”

Boeheim and the Dome, of course, have taken care of transforming Syracuse into a “basketball school.”

With that in mind, as we highlight some of the antidotes from the Syracuse chapter of the book, we lead off with the tease that as a highly sought-after high school all-star, Bing had two pretty impressive escorts showing him around campus on his official visit, and they weren’t members of the basketball team that had gone 2-22 the recently completed season.

Recruited by schools in the Northeast, ACC, Big Ten, and several from the HCBU group, Bing chose Syracuse because of the relationship he built with new head coach Fred Lewis. Lewis’ honesty in his recruiting approach going into a rebuilding project, and “tell it like it is” philosophy made a distinct impression.

Syracuse’s approach was a breath of fresh air to Bing in a recruitment process that had become tiresome. He liked the style of play Lewis mapped out; a fast-paced offense that would let him score. The program also had a new home court debuting at Manley Field House.

(The chapter also provides an insight as to what Boeheim absorbed under Lewis, sharing a similar approach to honest assessments over his long coaching career.)

Late in the spring semester, and with great weather to boot, Bing visited the university. Lewis made sure to make the biggest of impressions with reigning Heisman Trophy winner Ernie Davis, and pre-law major, junior tight end John Mackey showing Bing around.

The trio deeply discussed academics and campus social life among a small African-American population – only 100 students out of an enrollment of 14,000 – in addition to the opportunity to rebuild basketball at a “football school.”

Bing and Boeheim became roommates their sophomore years, the first year of varsity eligibility in those days, and along with Lewis’ improved recruiting bringing in other key players, developed a steady increase of success each season.

By 1965-66 their senior year, the team missed by a few percentage points averaging 100-points per game, for the season. Think about that for a moment. An average of 100 points per game. That’s a pretty fast-paced offense in which Bing was the leading scorer at a whopping 28.4 ppg. SU lost to Duke in the East Regional Final, missing out on the school’s first Final Four appearance by 10 points, capping a stellar Orange career for the duo.

The Naismith Memorial Basketball Hall of Fame requires that new inductees be introduced by a Hall of Fame member. When Boeheim was inducted in 2005, on stage handling the duties in Springfield, Mass. was Dave Bing.

About Brad Bierman 821 Articles
Now in his sixth decade of covering SU sports, Brad was sports director of WSYR radio for eight years into the early 1990s, then wrote the Orange Watch column for The Big Orange/The Juice print publication for 18 years. A Syracuse University graduate, Brad currently runs his own media consulting business in the Philadelphia suburbs. Follow him on Twitter @BradBierman.