With things going sideways early in the 2020 campaign for the Syracuse football team, thoughts turn to an all-familiar place for its fans – the future. While the collegiate fans’ allegiance does not change, the players they root for do, so it makes it very easy for Orange supporters to daydream about the young players on the roster and those who might join them.

When things turn poorly for the current squad, many fans turn their focus to younger players and their contributions.

Sophomore Mikel Jones paces the defense in tackles with 44 and has been a do-it-all player, leading the squad with three interceptions, four quarterback hits, two forced fumbles, and two fumble recoveries. In fact, Saturday’s Clemson game was the first game Jones did not have a turnover this season, only forcing a fumble the Tigers recovered.

Jones’ classmate Geoff Cantin-Arku is right behind him on the tackling leaderboard with 41 stops and also has three quarterback hits. Redshirt freshman cornerback Garrett Williams leads the team in pass breakups (five), is third in tackles (34), and had a 39-yard interception return for a score against Clemson.

Even the true freshmen have been getting into the act. Defensive backs Ja’Had Carter and Rob Hanna are right behind Williams with 31 and 29 tackles, respectively, making the top five tacklers players in their second year on the team, at most. Both Carter and Hanna have recorded an interception, as well. Stefon Thompson and Marlowe Wax have combined for 35 tackles at linebacker as true freshmen, as well.

On the offensive side of the ball, sophomore Matthew Bergeron has started every game this season at tackle, including the last two contests on the left side. Sean Tucker is the first SU freshman running back to have two 100-yard games in a season since Delone Carter in 2006 and was on pace to pick up his third until leaving the Clemson game with an injury.

And, of course, fans look even further into the future at the verbal commits in the 2021 class. It’s been talked about as Dino Babers’ highest-ranked recruiting class since arriving at Syracuse and the numbers bear that out. Here are the 247 Sports’ composite rankings of the recruiting classes during Babers’ tenure, both nationally and in the ACC:

The jump up to 46th is not something to really brag about, but it is the best class Babers has brought in. Or is it?

One reason the class has cracked the top 50 is that it is already almost full. That rating is based on 21 verbal commits with a maximum of 25 scholarships permitted.

Meanwhile, the two ACC teams trailing SU are Duke and Wake Forest. Each has fewer commits right now with the Blue Devils at 17 and the Demon Deacons 18. While they have fewer players on board, Duke’s average commit rating is three-fourths of a point higher than that of the Orange. As a result, Syracuse is almost certain to slide to 13th when Duke finishes off their class.

And it’s not just Duke that is likely to pass the Orange in the rankings when their classes are complete. Here are a dozen other Power Five schools who have a higher average commit rating, but trail SU in the rankings due to having a lower number of commits:

In fact, UCLA, Utah, Ole Miss, Indiana, and Texas Tech all have an average commit rating over two points higher than the Orange.

All told, SU looks more likely to finish 55th or lower nationally than in the top 50 unless they swing WAY above their weight class on their last four commits. Babers has said he’s probably going to hang onto a couple scholarships for junior college transfers and they offered defensive tackle Isaiah Iton a couple weeks ago.

So, how do the Orange improve their recruiting?

The money sunk into renovating “The Building Formerly Known as the Carrier Dome” and the indoor practice facility should pay some dividends. Perhaps the recent changes to the coaching staff and their recruiting specialties (Tony White – West Coast, Chip West – DC/Maryland/Virginia) will pay off. Hopefully, whatever magic Nick “Swag Daddy” Monroe has never runs out. Maybe the offensive line commits that Mike Cavanaugh landed from Hawaii creates a very, very long pipeline. The changes to the transfer portal could lead to, well, who knows what that will lead to.

But, do you know what would really improve Syracuse’s recruiting and get them solidly into the top 50 on an annual basis? Move the school somewhere else.

Literally, move the school almost anywhere else in the country.

Heck, just start by moving the school almost anywhere else in ACC-land.

If you do not believe me, please bathe in this glorious heat map made by Banner Society to illustrate the hometowns of the top 15 recruits in each class from 2000-2021: 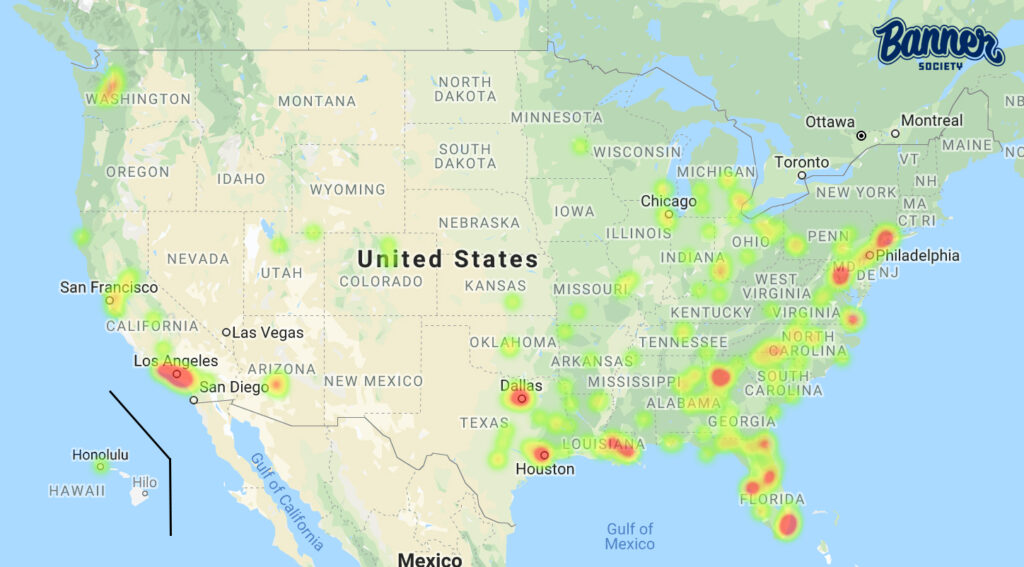 Side note: I recommend reading the linked article if you want some really depressing information about how few blue-chip players come from New York, particularly on a per-capita basis and when compared to SU’s conference rivals.

Getting back to the map, one of the first things you will notice is how the name “New York” is pristine and easy to read because basically none of these top-end recruits come from the state, particularly the space between the words “New” and “York” where Syracuse is located, more or less. There’s a little peripheral color around the New York City metropolitan area, but as far as it pertains to the Orange, that may as well be below the Mason-Dixon Line.

And speaking of the Mason-Dixon Line, if you turn your gaze lower toward that part of American history and further south, you will see how most of the states where ACC campuses are located have their names obscured by those heat blobs of recruits. Virginia, the Carolinas, Georgia, and Florida all have a lot more high-end talent in their neighborhoods than Otto the Orange does.

New York is traditionally one of the weakest states for high school football, which doubles as the lifeblood of all but the elite of the elite college programs, such as Alabama, Clemson, and Ohio State. If you would like some evidence, here are the players from New York who have committed to the Syracuse in the last four years and what they have accomplished:

» Related: Where does Syracuse stand in the ACC Power Rankings for Week 7?

In four years, that is one New York native who has turned into a meaningful on-field contributor in the last four recruiting classes (Mahar still has time, obviously). Meanwhile, SU has had 21 commits from the state of Florida in the same four years, getting five or six in each class.

Unfortunately, geography is going to be an issue at Syracuse when it comes to recruiting almost certainly forever. Figuring out how to make it work would go a long way toward helping the Orange in the future.

About Jim Stechschulte 805 Articles
A 1996 graduate of Syracuse University, Jim has reported on Syracuse sports for the Syracuse University Alumni Club of Southern California on nearly a decade. He has also written a fantasy basketball column published by NBA.com. He currently resides in Syracuse. Follow him on Twitter @DSafetyGuy.