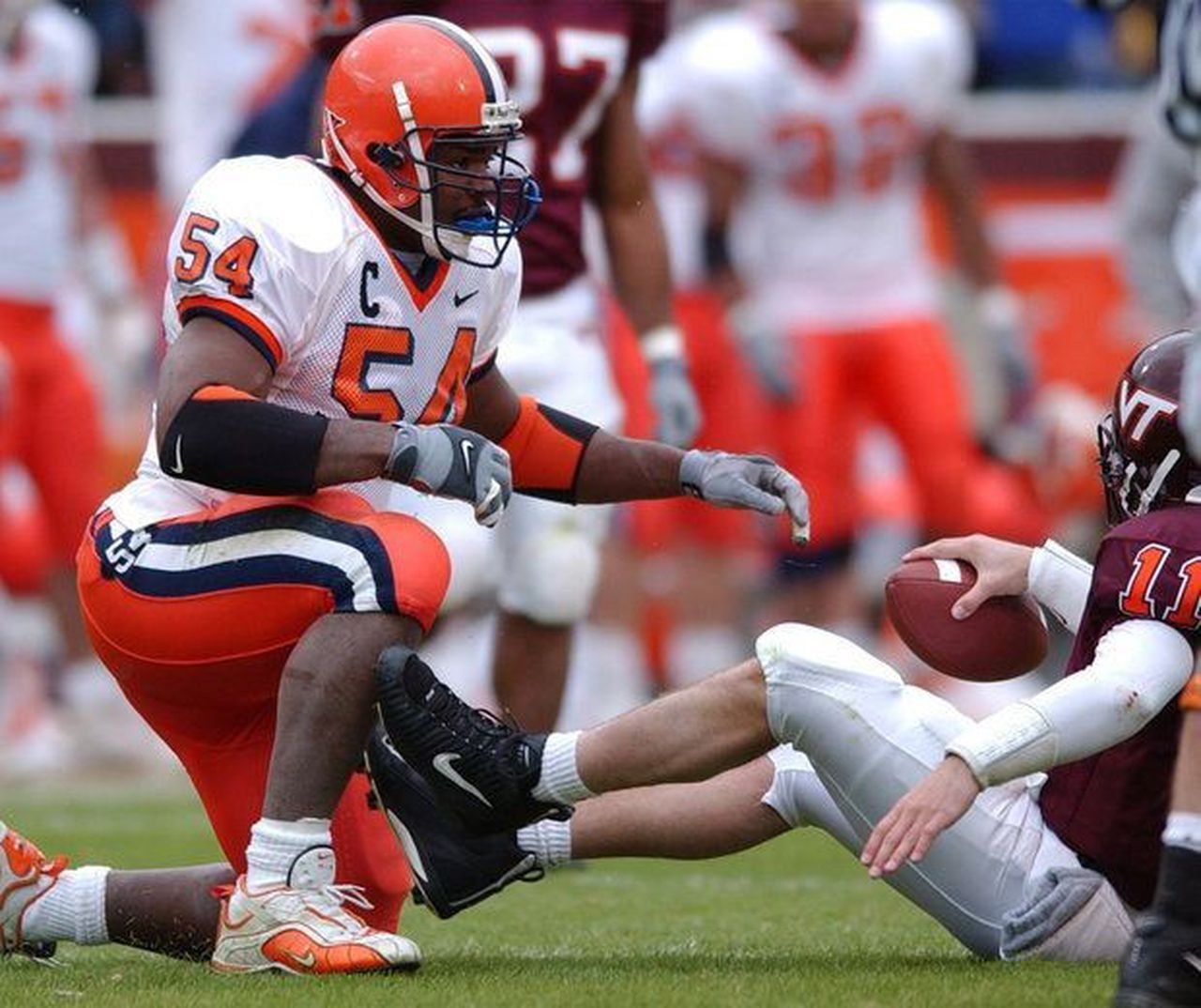 Over the years there have been several hundred players come through the Syracuse system before heading into the elite world of the NFL. One of those who had the best career is the formidable Dwight Freeney. Here we look back at the man whose place as an Orange legend is assured. ​

Freeney was born to parents Hugh and Joy in February 1980 in Hartford, Connecticut and that is where he spent his formative years. It was apparent from an early age that Freeney was going to excel at sport but, at that time, the odds of Football being one of them looked long to say the least.

He was handy at basketball but when he started high school – where he attended Bloomfield High – it quickly became evident that he had talents in baseball and soccer too. On the diamond field, Freeney was used as a relief pitcher. He was good at it too as he established himself as one of the team’s key players. Meanwhile his soccer career saw him don the goalkeeper gloves. ​

A turn towards football looked a million miles away. It’s believed that Freeney’s parents were the reason behind that; their concerns being that the sport left to much to chance with regards to serious injury. Step forward Hugh Jr, Freeney’s older brother. He’d long shown an interest in the gridiron game and, after constant badgering, his parents finally relented. He became the Bloomfield’s starring quarterback, but his persuasive ways were not finished. ​

After a summer break, Dwight finally entered the fray as a football player. Initially, he played as a linebacker. His inexperience with the sport was put under the microscope. Freeney looked out of his depth.

A switch of position though soon changed things for the better. Playing as a defensive end, Freeney was a monster.

By the time his high school career ended, he had recorded more sacks than anybody else in not only Bloomfield High history but across the entire state too. ​​

When it came to select a college Freeney had plenty of choice. Boston, Maryland and Wake Forest were all possibilities, but he opted for the offer of an athletics scholarship with the Orangemen. Injuries kept him out of the football scene during his freshman year. Even the next season only saw him start two games, but he was already showing his strengths with blistering pace and registering 3.5 sacks. By the time Freeney’s senior year rolled around he was a nailed-on starter in the team and was fast becoming the player opposition offense would try to avoid. Rarely did they manage it with Freeney picking up 4.5 sacks solely on Virginia Tech’s Michael Vick, who was widely regarded as one of the toughest quarterbacks to takedown. The end of his campaign was hampered due to a ruptured spleen but season stats of 13 sacks across seven games still made impressive reading and All-America honours followed.​ His rise was similar to a horse in the Kentucky Derby odds winning it all.

Freeney wasn’t satisfied with that though and his senior year took things to another level. His performances yielded results with such consistency that it became a shock when he failed to record a sack, which happened in a match against Pitt that brought an end to a run of 17 games where at least one sack had been landed.

By the end of the season, Freeney had recorded a national high of 17.5 sacks, which was a NCAA record surpassing the previous number of 15.5. His time at Syracuse came to a close with All-America and First Team honours along with scooping the award for Defensive Player of the Year.​

​Defying the odds in the NFL​

Despite boasting an impressive CV from his college days, the NFL draft was somewhat of a question mark for Freeney. On one hand, he’d just spent two years dominating quarterbacks but that was at a different level and, as the NFL goes, Freeney lacked the stature of a defensive end. This led to many suggesting he might be waiting until round five for his name to be called. It didn’t work out like that.

Instead, the Indianapolis Colts decided to look at what he did offer as opposed to what he didn’t. What they saw in Freeney was a quick, powerful runner with a low centre of gravity that could combine to make for a lethal weapon. They took the plunge in round one making Freeney the number 11 pick. It proved a smart choice. ​

​His inaugural campaign saw him finish behind Julius Peppers to claim runner up in the Defensive Rookie of the Year category with his tenacity earning him a lot of admirers alongside his record breaking nine forced fumbles. From that first year, Freeney kicked on again. He was integral to the Colts style of play and 2004 saw him lead the NFL in sacks (16.0). Two years later, he was collecting his one and only Super Bowl win with his main contribution a recovery off Cedric Benson at the close of the first quarter as the Colts beat the Chicago Bears 29-17 in Florida. In total, Freeney spent 11 years with the Colts racking up seven Pro-Bowl appearances and three first team All-Pro awards.

After leaving Indianapolis, Freeney spent time with the San Diego Chargers, the Arizona Cardinals, Atlanta Falcons, Seattle Seahawks and the Detroit Lions before eventually calling it a day. The mark he left on history? He’s part of the Colts Ring of Honour for one but stats of 332 tackles, 125.5 sacks and 47 forced fumbles aren’t half bad either.​

On top of it all, he still walks the Syracuse halls today as he looks to pass on his wisdom to those whose NFL futures lay in wait. ​