On Tuesday the Syracuse men’s basketball team received its first commitment of the 2020 class from Lanham, Md., forward Woody Newton.

Ranked the 79th best player in his class by 247Sports, Newton is a nice addition. But to call this recruiting cycle a success and break out of a 5-year recruiting decline, Syracuse will need to land top priority Andre Jackson.

Jackson, a local recruit from Albany, is the 38th ranked recruit, according to 247Sports, but his importance goes beyond his ranking and unparalleled athleticism.

Syracuse has not had a consensus top-40 recruit since Tyus Battle committed in the 2016 class. That three-year drought is the longest that SU has experienced since recruiting services started publishing rankings online in 1998.

In fact, the three-year running average of SU’s top recruit, based on the consensus RSCI rankings, has declined from 20th in 2014 to 77th in 2019.

Yes, that is partially caused by some recruiting services not ranking Canadian recruits like Oshae Brissett and incoming freshman Quincy Guerrier. But the decline in recruiting can be seen across the depth of SU’s classes recently.

I examined this by ordering the recruits in each SU class by their high school composite ranking. I then calculated the three-year running average of the ranking for each position in each class. For example, the top position in recent years would include Tyus Battle, Oshae Brissett, and Jalen Carey, while the number two slot would go Matt Moyer, Marek Dolezaj and Robert Braswell.

As shown in the chart below, the average ranking of SU’s first, second, third and forth recruits have all declined in each year since 2016.

Stepping back further in time, while SU’s recruiting has had ups and downs in the last two decades, this decline in the ranking of SU’s top recruits has been unprecedented. 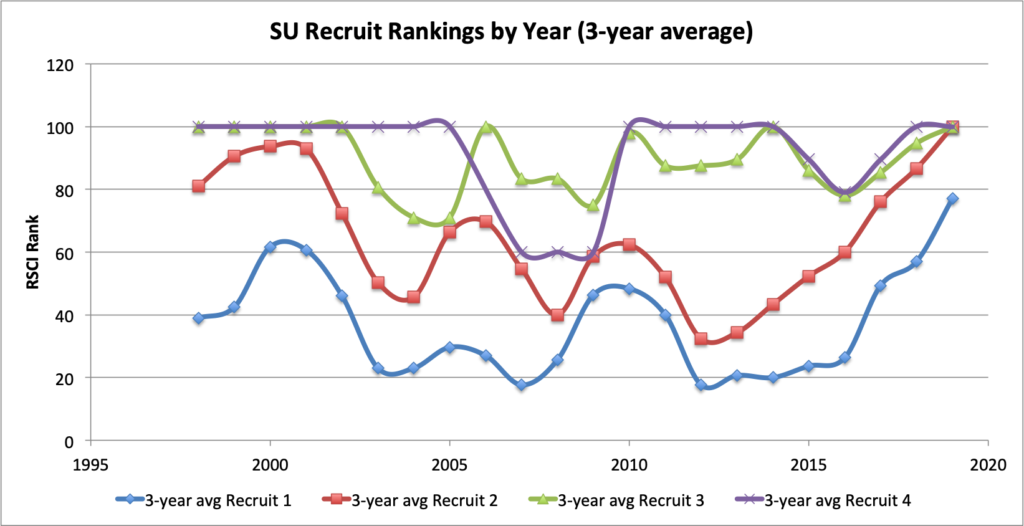 Jackson is a prized recruit who has a chance to reverse this trend. Not only that, but he is local and plays for the same City Rocks AAU team that developed many current and former Orange players. Syracuse must land him for this class to be a success.

As for Newton, he has the body of a prototypical Syracuse wing with a 6-foot-8, 190-pound frame, and provides a nice start to the summer recruiting season for SU.

Newton has averaged 5.7 points and 3.5 rebounds per game on 42.9 percent shooting thus far in 13 games for Team Takeover in the 2019 EYBL AAU circuit. His shooting shows both signs of promise and concern. He shot 38 percent from 3 on 21 attempts but only 51 percent from the free throw line.

Newton’s per game statistics may be depressed because he shares the court with other talented prospects, but with a high school rankings outside the top 75, it’s clear that he is not the jewel of SU’s recruiting class.

That is Andre Jackson.