The last three seasons, the Syracuse men’s basketball team has been stuck in mud of mediocrity.

Let’s put aside wins, losses and NCAA Tournament runs, and look at the team’s adjusted efficiency margin (AdjEM). This is a tempo-free metric of how many more points per 100 possessions the offense will score than the defense gives up, adjusted by the strength of opponents. For year-over-year comparisons of how ‘good’ a college basketball team is, this is one of the best measures.

The problem is that Syracuse hasn’t improved. The team has stagnated.

The best year-over-year improvement in AdjEM came in 2002-2003, when Syracuse won the National Championship. The special sauce that season isn’t hard to figure out: Carmelo Anthony.

But the next two best one-season turnarounds are perhaps a bit more surprising. In 2008-2009, Jonny Flynn led a team with only one senior to an 8-point AdjEM improvement. To put that in perspective, had this past year’s team had an 8-point higher AdjEM it would have finished on the level of Virginia Tech or Florida State.

The next best single-season improvement was 5.8 AdjEM in 2015-2016. The year prior to that was Syracuse’s third worst in the last 20 years, so the team had little room to go but up. Nonetheless, the senior leadership of Mike Gbinije and Trevor Cooney combined with the precociousness of freshmen Malachi Richardson and Tyler Lydon led the team to heights no one saw coming.

I looked at the last two decades of data to investigate. It turns out that SU’s improvements in offensive efficiency have a much higher correlation with its overall AdjEM advancements than progress at the defensive end of the floor. The two charts below show the correlations: 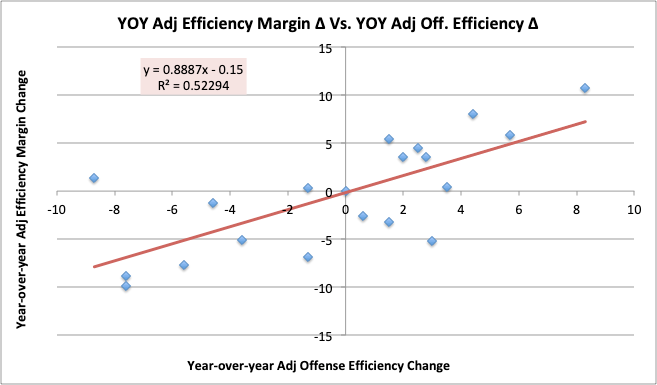 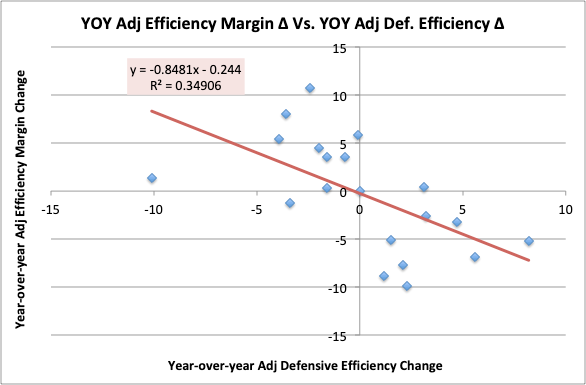 Interestingly, as much as some fans exhort the team to play faster, SU’s annual changes in tempo had no correlation at all with its overall team improvement: 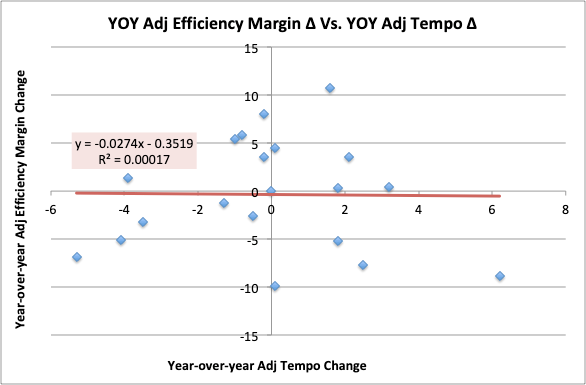 The need for better offense makes sense in the context of Jim Boeheim’s zone defense. Boeheim recruits specifically for the zone, and he teaches it so well that even his worst teams tend to have decent defenses. Only twice in the last 20 years has SU finished outside the top 50 teams in adjusted defensive efficiency.

This has a stabilizing effect. In fact, the variance in Syracuse’s adjusted offensive efficiency since 2000 is more than 50% higher than that of the defense.

So what can next year’s squad do to improve its offense?

Anyone who has watched the team over the last few years knows the answer: it must shoot better.

There’s no single recipe to improve shooting, but with at least 38% of minutes played from last season not returning, there will be many opportunities for SU’s newcomers to turn the ship around.