With the commitment of graduate transfer Geno Thorpe to join the Syracuse men’s basketball team next season, the 2017-2018 Orange roster is locked. Talk has shifted from who will be on the team to who will start on a roster that returns just two starters and a mere one-third of the scholarship minutes played last season.

But if there’s one thing that coach Jim Boeheim has demonstrated over the years it’s that being in his starting line up does not guarantee playing time. Syracuse has had many a sixth man who plays “starter-level” minutes while actual starters get a quick hook and never return from the bench.

So whom can you expect to see on the court next season? With four incoming freshmen, none of whom are consensus top-100 recruits; a redshirt freshman; a graduate transfer; and a potential medical redshirt who has only played 7 games in his Orange career all vying for playing time, this upcoming season is perhaps the least predictable in recent SU history.

But while the roster is full of question marks, Boeheim is about as predictable as a coach can get. The best players play the most and the worst players play the least. It’s a sensible strategy for any coach, but Boeheim’s top-heavy rotation is particularly dramatic when you examine it closely.

On Syracuse teams, a player’s place in the pecking order explains a whopping 92 percent in the variation of his minutes per game. I showed the chart below in an article last year, and the results have only been reinforced by the addition of this past season’s data.

The chart above includes the last eight seasons, and for each one I have ranked all SU’s scholarship players by their minutes per game and plotted a linear trend line.

Last year, based on this regression analysis and using educated guesses on which players would play the most minutes, I was able to estimate the scholarship players’ playing time within an average of 2.8 minutes per game, with the biggest miss coming from underestimating Taurean Thompson by 8 minutes.

But what the chart above obscures is the year-by-year trend for each place on the pecking order. Have you noticed that Syracuse’s top players seem like they’re playing more and more minutes every season? It’s not your imagination. They are. 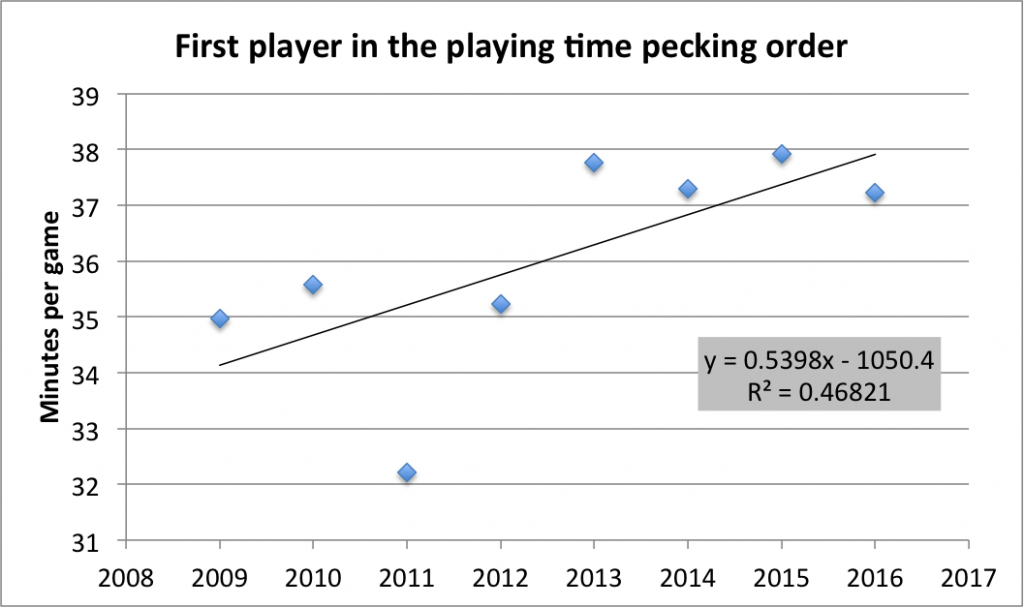 The chart above plots the minutes per game of Syracuse’s leader in minutes for the last eight seasons. As you can see, the trend is going upward.

Armed with this knowledge, we can attempt to sort out the playing time for the upcoming season.

The top spot will almost certainly go to Tyus Battle, as the team’s top returning scorer. Let’s assume that Thompson will play the second-most minutes based on his starting role last year and presumed place as the team’s primary low-post scoring threat.

After that, it gets interesting. Some combination of Matt Moyer, Marek Dolezaj, and Oshae Brissett will see a lot of minutes at small forward and power forward. For the time being, let’s assume they will play in order of seniority, with Brissett edging Dolezaj based on his commitment date (arbitrary, I know).

But Frank Howard, who may well be the opening game starter at point guard, will surely have a chance to earn significant playing time in the guard rotation. Even if he ends up playing behind Thorpe, he is likely to be the first guard off the bench. As a result, let’s stick him between Moyer and Brissett in the pecking order.

We have yet to discuss a center, and there is good reason for this. SU hasn’t had a true center rank in the top five in playing time since Rakeem Christmas graduated. While both Paschal Chukwu and freshman Bourama Sidibe may see playing time in the middle of the zone, Boeheim’s recent history suggests he will move Thompson to the five to improve Syracuse’s offense.

As a result, let’s assume the two SU centers will round out the rotation along with freshman point guard Howard Washington. If this pecking order pans out, how will the playing time shake out? The table below provides two estimates, one based on the linear regression determined by the place on the pecking order, and the second based on the year-over-year trends for each playing-time rank that I described above.

Let’s hope Battle and Thompson have been doing their wind sprints this offseason.