Syracuse has a free throw problem, but it’s not what you think.

After ranking no better than 150th in the country in free throw percentage for 16-plus years (and often not cracking the top 250), the Orange is finally a good free throw shooting team. SU has made 72.8 percent of its foul shots this season and ranks 1st in the ACC at 79.6 percent in conference play.

John Cassillo at Nunes Magician has a well-researched piece on how this year’s team is on pace to be SU’s best at the line since 1983-84 and the third-best overall under Jim Boeheim.

But here’s the problem. Syracuse is not getting to the line enough to take advantage of its accurate shooting. In fact, this year’s Orange is on pace to have the third-worst free throw rate (the ratio of foul shots to field goal attempts) in the last 15 years.

As counterintuitive as it might seem, getting to the free throw line is actually more important than making the shots. As Dean Oliver, who devised the “Four Factors of Basketball Success,” put it, “Teams that get to the line more are more effective than teams that make a higher percentage of their free throws.”

A more tangible example comes by comparing the 2007-2008 Orange with this year’s team. The 07-08 team only shot 66.8 percent from the line — 6 percent worse than this year’s squad — but its free throw rate was 42 percent compared to this year’s 34.8 percent. As a result, the 07-08 team scored 0.01 more points per possession at the free throw line. In one sense, that makes the 07-08 team “better” at foul shooting, despite the worse accuracy. 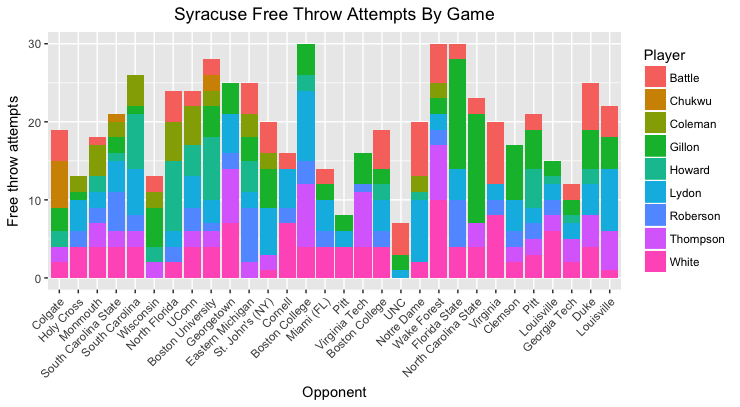 The perfect situation, of course, would be to have both a high free throw rate and a high free throw percentage. In that sense, this year’s SU team is wasting a once-in-30-years opportunity to capitalize on being accurate at free throw shooting.

The biggest reason Syracuse has struggled to get to the line is players have been unable to consistently get to the basket. According to Hoop-Math.com, only 32.7 percent of SU’s shots come at the rim compared with 39.9 percent on 3-point jumpers.

Andrew White III is the biggest culprit. Despite being one of SU’s best free throw shooters and having 6’7’’ size, he only attempts 13.6 percent of his shots at the rim. Tyus Battle and Tyler Lydon are not much better at 21.7 and 29.5 percent, respectively. For comparison, these are much worse than John Gillon or Frank Howard (35.7 and 39.2 percent, respectively).

As the Orange’s best free throw shooter, Gillon is an interesting case. He has SU’s best free throw rate at 42.4 percent this season, but it’s a significant decline from his earlier career. His last two seasons at Colorado State he boasted free throw rates of 56.8 and 87.4 percent. The decline may be the result of tougher competition, but Gillon’s comments during games have made clear he believes he should be getting to the line more frequently.

Thus far in conference play, both Syracuse’s free throw percentage and free throw rate have had some correlation with success. 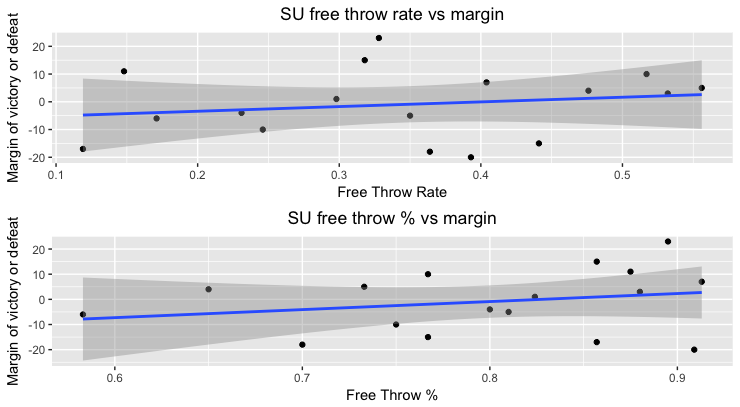 But it’s only a matter of time before SU’s inability to get to the line catches up with it. Syracuse only attempted 12 free throws in its earlier loss to Georgia Tech. If the Orange wants to lock up a spot in the NCAA Tournament with a win this weekend, it will need to get to the line more than that.