Boeheim thinks the 2016-2017 Orange will be one of his best teams in quite some time. But after losing three starters and 56 percent of scholarship minutes played from last season, SU will also enter the season with the most uncertainty over the team’s identity in recent memory.

In this scenario, projected 2017 first-round draft pick Tyler Lydon would be the first off the bench. This is an indication of just how deep the Orange could be, despite only having 10 scholarship players if White chooses SU. The bench will also include recent signee and top-100 recruit Taurean Thompson at power forward or center, top-100 recruit Mathew Moyer at wing, Providence transfer Paschal Chukwu at center, and sophomore Franklin Howard at guard.

Coach Boeheim is notorious for having a short bench, especially once conference play begins, so how will playing time shake out among this talented group?

Let’s start with the freshmen. For the past four seasons, I have projected freshman playing time using a regression model that takes into account the composite recruiting ranking of the freshman (RSCI), the minutes played by returning players who play the same position and any incoming transfers. Here is how the model has performed, with the model’s projection in red and actual minutes played in black:

» Related: After 28 years, how did that ‘SYRACUSE’ sign disappear from Rupp? 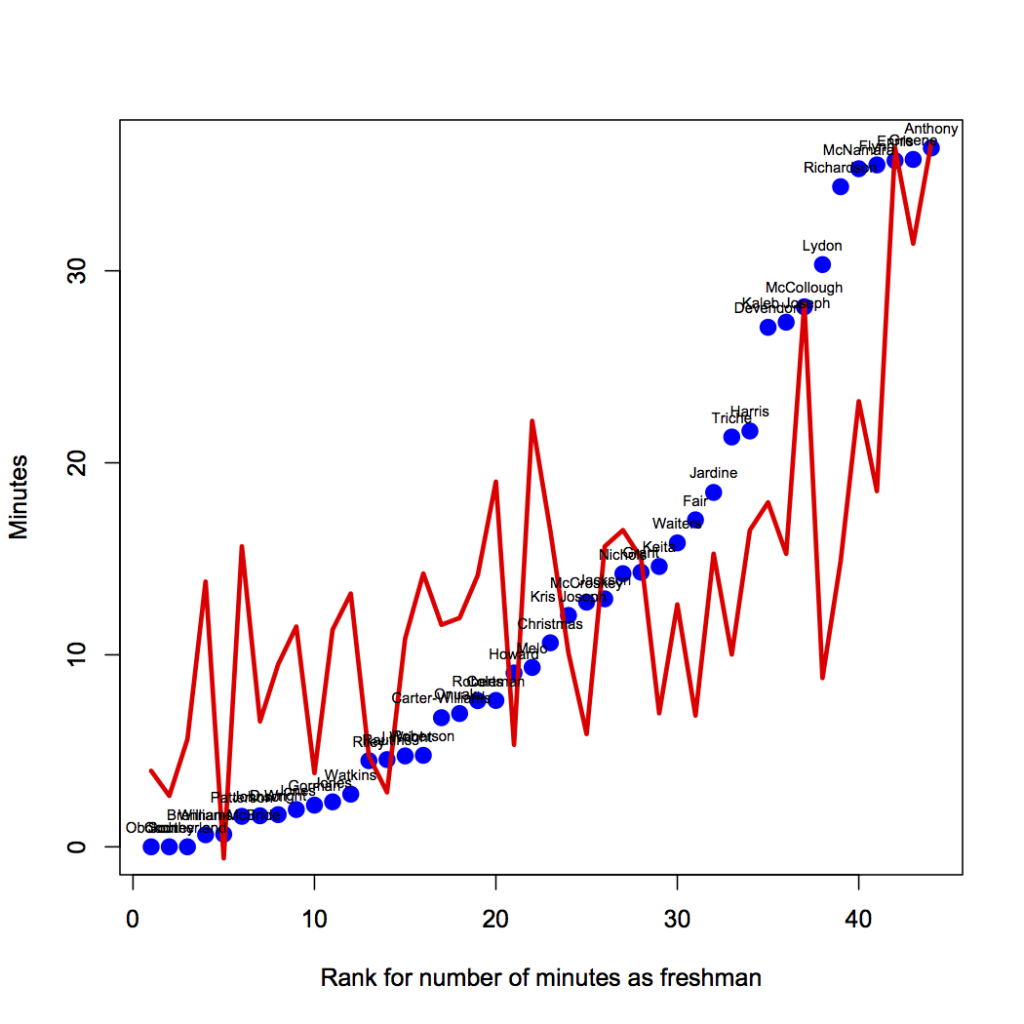 As you can see, it is not perfect and missed badly on Lydon (partially because it assumed he would only play wing and not center), but it statistically explains about 46 percent of the variation in minutes played by freshmen.

The model projects Battle will play 26 minutes per game while Moyer will only play 10 minutes per game. You can see how this compares to historical Orange freshmen’s actual playing time below. 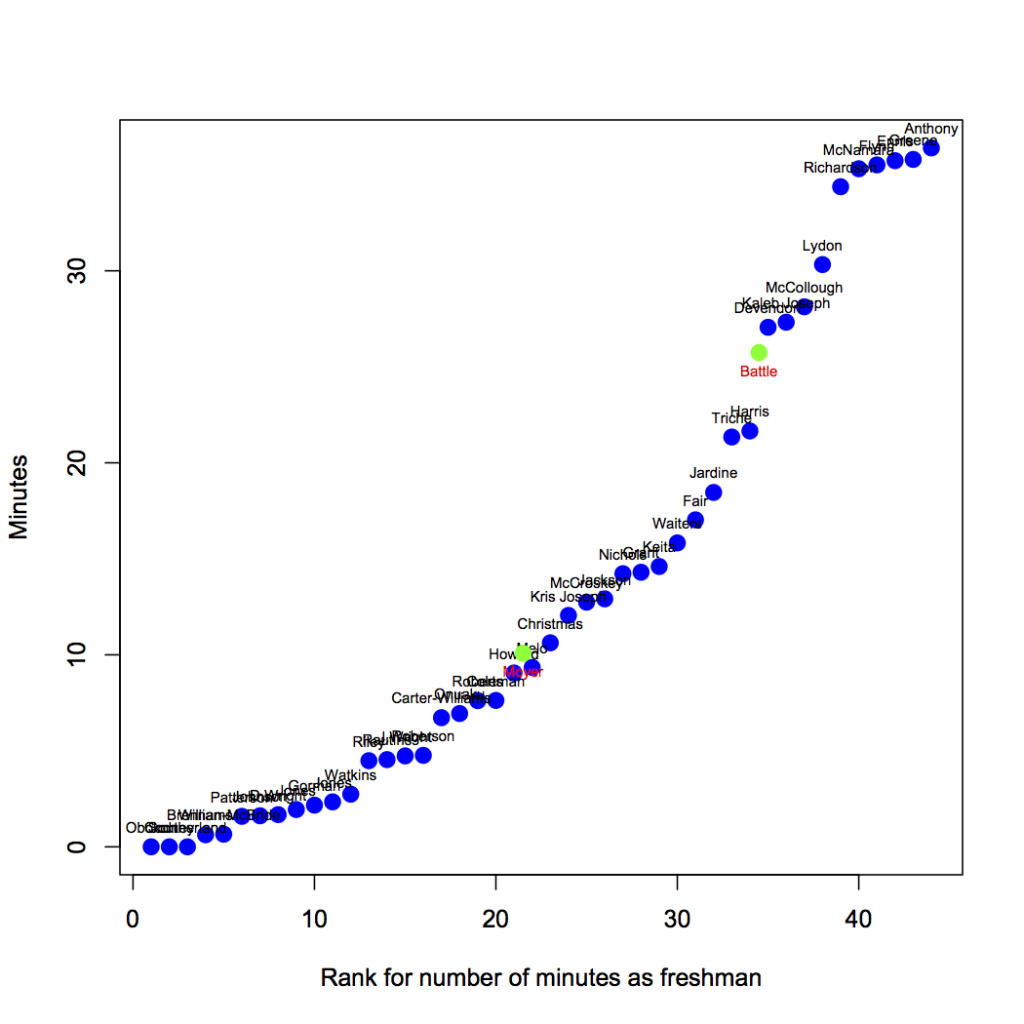 These estimates seem reasonable based on what we know about the incoming recruits, but let’s look at how the rest of the minutes may be allocated to put them into context.

Boeheim has been remarkably consistent in his distribution of minutes. In the last seven seasons, the player with the most playing time has ranged between 34 and 37 minutes per game in all but one season.

When you examine who played the second most, third most, and so on each season, you find similarly small ranges in minutes per game. In fact, the ranking of a player’s minutes on the team explains 89 percent of the variation in his actual minutes played. The linear relationship is shown clearly with the trend line below based on the previous seven seasons.

The takeaway here is that Boeheim doesn’t tend to spread out playing time, no matter the structure of the team. The 7th man has only averaged more than 20 minutes per game once, and the 8th man has never cracked 15. If you can determine where a player will rank in minutes played, then you can estimate how many minutes per game he will play with a large degree of accuracy.

The top two players for playing time tend to be Syracuse’s most important guard and best inside scoring threat. This includes tandems such as Trevor Cooney and Rakeem Christmas in 2015, CJ Fair and Tyler Ennis in 2014, and Michael Carter Williams and Fair in 2013. Last season was the only time in the past seven seasons that two guards have held the top spots.

Although Battle has the most potential in Syracuse’s backcourt next season, the team’s most important guard is likely to be Gillon. He brings the most experience, is the best shooter, and will likely start at point guard.

Syracuse’s best inside scoring threat could either be Lydon or White. White is better known as an outside shooter, but with Battle already occupying the combo guard spot White is likely to play in a small forward role similar to Richardson’s last year. His long 6’7’’ frame will allow him to play wing in the zone, but he will frequently pop out to the perimeter for 3s.

Syracuse’s second and third ranked players for minutes played only differ by 1.5 minutes per game on average – 33 versus 31.5 – so we can assume that Lydon, Gillon and White would each be in a similar range.

The question then is where will Boeheim draw the line in his seven- or eight-man rotation. Tyler Roberson and Dajuan Coleman are certain to remain key fixtures in the lineup as the team’s senior leaders. Howard is also likely to remain in the rotation as the team’s back-up point guard.

This leaves Moyer, Thompson, and Chukwu to battle for the remaining positions. Due to the depth at forward, Moyer is unlikely to play significant minutes. Chukwu has potential to play Baye Keita-esque minutes as a defensive back-up. Thompson also has a chance to play center if he proves he can provide the best combination of offensive and defense at the position. Given Coleman’s history of knee problems, all three may rotate in deep into the conference schedule.

Based on these assumptions, we can rank the players based on expected playing time and generate an estimate for minutes per game based on the linear regression above. This produces the following estimates: