Every year I write this article, and every year I find Syracuse in the same situation. After showing just enough promise to raise the hopes of diehard fans, Syracuse football has once again fallen flat on its face. It’s not time to give up on football yet, but with Orange Madness this Friday and the first exhibition against Le Moyne less than 3 weeks away, it’s OK to start thinking about basketball season.

This year’s team comes with an unusual amount of intrigue simply because its unusual characteristics. For the first time in years, Syracuse can space the floor with multiple 3-point threats at the forward and guard positions. Syracuse may play two freshmen in the regular rotation – and not even the two that were expected just a couple months ago. The team will be big at the guard spot and small at the center position. As a result, this team will be playing a different style of basketball than we have seen from previous Boeheim teams.

To predict the team’s success, as in the past two seasons, I have used a regression model to calculate the team’s expected winning percentage. The model accounts for the returning talent by examining the previous year’s winning percentage and the percentage of returning minutes played; it accounts for incoming talent by examining the RSCI ranking of incoming freshmen, their expected playing time, and the potential impact of any transfers.

Last year, the model predicted Syracuse would have a winning percentage of 60.8%. By finishing 18-13 (58%), the model was actually too optimistic although not too far off. What does it have to say for this season?

Unfortunately, as you can see in the continuation of the red line to 2016, it predicts more of the same. According to the model, Syracuse can be expected to win 58% of its games. With a 32-game regular season slate, that equates to 19-13.

But perhaps this is not fair. After all, the model is partially based on last year’s abysmal results. Most observers would agree that that team had more talent and potential than it showed, Chris McCullough’s injury not withstanding. 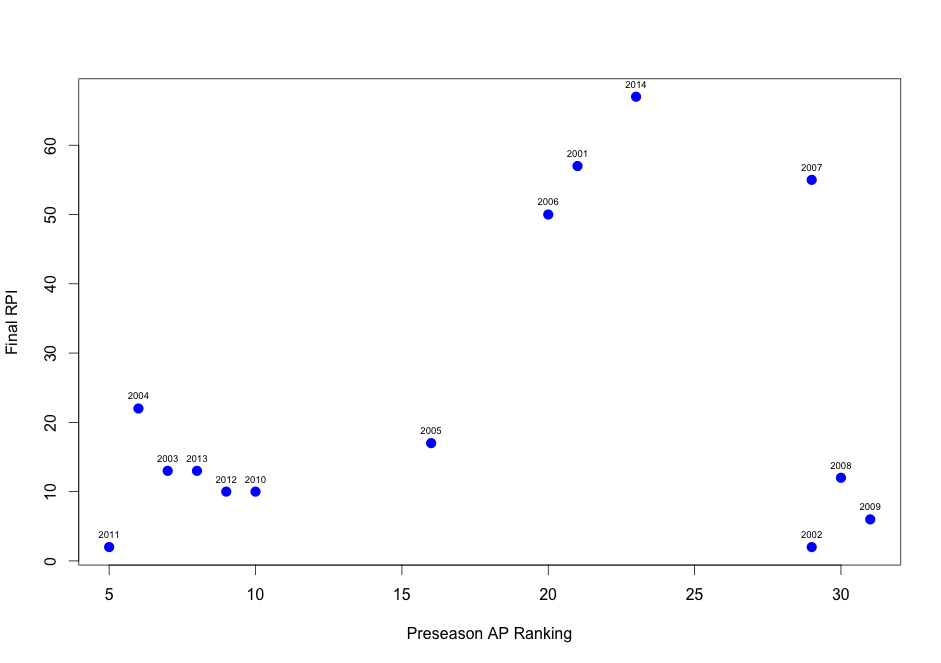 It is too early for the pre-season AP poll, but CBS recently released its pre-season rankings. The Orange fell at No. 43 with the assessment, “Perhaps a bubble team. We’re not seeing top-25 caliber here, but certainly a step up from last season.”

The Orange would certainly be a bubble team at 19-13, and if they are a “step up” from last season then perhaps they can expect to win even a few more games.

Ultimately, winning percentage comes down not only to the talent you have but the talent you play against. Syracuse’s schedule this season will be one of its most challenging in several seasons.

At first glance, the initial four games appear to be cupcakes, but St. Bonaventure will not be a cakewalk. The Bonnies are ranked No. 105 in CBS’s rankings, ahead of the likes of Virginia Tech and St. Johns.

After that, the going gets even tougher at the Battle 4 Atlantis where Syracuse will likely face either UConn or Michigan (both top-30 teams) followed by one of Gonzaga (No. 10),
Texas A&M (No. 27) or Texas (No. 33).

The trip to the Bahamas is immediately followed by a visit to the Dome from last year’s national runner-up Wisconsin (No. 17) and a trip to the nation’s capital to renew the rivalry against Georgetown (No. 28).

The remaining non-conference schedule features many familiar teams, including a road game against St. John’s. The final non-conference home game will not be easy as former Indiana coach Mike Davis leads a Texas Southern team that made the NCAAs last year and are likely to return. All told, it would not be a shock to enter ACC play at 9-4.

The ACC is likely to have at least 3 teams in the top 10 all season: North Carolina, Duke and Virginia. The Orange plays these teams a total of 4 times, all of which will be on the road except for a home game against the pre-season No. 1 Tar Heels. These games could add another 4 losses to SU’s tally.

That leaves 15 games against the rest of the ACC, including 8 home games. NC State, Miami and Notre Dame are expected to hover around the top 25, while Pittsburgh, Louisville and Florida State are expected to have down seasons relative to recently but will always be tough games. Assuming the Orange wins its home games against these teams and loses on the road, it would add another 4 wins and 4 losses.

This leaves 7 difficult but very winnable games. Inevitably there will be surprises that come in both the pleasant variety and TV-smashing kind, but given this simplistic heuristic SU could reasonably expect to win 20 games and finish 20-12. This is a step up both from the model’s prediction and last season.

About Jeff Irvine 106 Articles
Jeff has covered Massachusetts Minutemen basketball for The Maroon and White and The Daily Hampshire Gazette. He has also written for The Daily Orange. Jeff is an Amherst, Massachusetts native, and graduated from Syracuse University in 2006. Follow him on Twitter @jeffreyirvine.