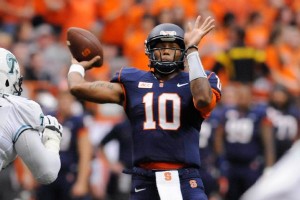 We’re still months away from the start of the new college football season but Orange fans are already licking their chops at the prospect of seeing a much-improved Syracuse squad this year. Quarterback Terrel Hunt is finally back for the Orange after missing majority of last season with a fractured fibula and that is great news for a Syracuse offense that struggled mightily last year without its starting QB.

The Orange ranked just 117th in the entire FBS last year in yards per pass attempt (5.8). They also converted just six touchdown passes last season as the Orange failed to cope with Hunt’s sudden absence. To demonstrate Hunt’s effect, the Orange lost six of their last seven games with Hunt out with his three replacements combining for just four touchdowns and 13 interceptions. With Hunt fully fit again, though, Syracuse has its sights set on a huge bounce-back season this year.

Orange fans will be looking for Hunt to replicate his amazing 2013 season where he led Syracuse to a famous Texas Bowl victory. He rushed for 500 yards during that year and passed for 1,638 yards and 17 touchdowns. Much of Hunt’s success this season, though, will depend on his mastery of offensive coordinator Tim Lester’s simplified spread offense.

He spent the entire spring learning a system that focuses mainly on downhill running and vertical routes. Hunt needs to make a quick understanding with returning wide receiver Steve Ishmael for the Orange to contend this season. The sophomore, however, only had 27 catches last year. With that inexperience in the receiving corps, it’s no surprise that NCAA sportsbook TopBet has Syracuse at +6000 to win the National Championship next year.

It’s not all doom and gloom, though for the Orange who are making waves in the recruiting scene this year. They snagged highly-touted running back Robert Washington after an intense battle with Florida. Washington, who rushed for 2,233 yards and 27 touchdowns as a junior, is ranked as high as no. 8 in the running back position in ESPN’s Class of 2016 list.