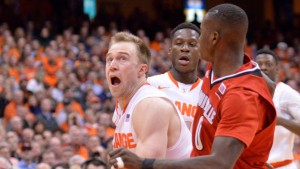 Rakeem Christmas had an extraordinary night against the Louisville Cardinals last night, dropping 29 points. Trevor Cooney, to say the least, did not.

Cooney went one for ten from the field and missed eight-straight three pointers to pull the team average down to 22.2% on the night. If it were not for Christmas’ stellar performance, the Orange would not have been able to make up for the extremely cold streak, which coach Jim Boeheim called “the worst game he’s had since he came here.”

It’s still a massive win, as current college basketball betting lines continue to list Louisville as favorites night-in and night-out, but Cooney’s cold night would be enough to spook some shooters.

Not Cooney. The young man said all the right things after the game, and seems as confident as ever in his abilities. “I wanted to take good ones today, and I thought I took good ones today,” he said. “They just didn’t fall for me tonight.”

Normally, it would be easy to suggest that a defensive juggernaut like the Cardinals would be a big part of the explanation. But for those that watched the game Wednesday night, it was easy to see that Louisville’s defensive strategy was not focused on their perimeter defense (there were larger, meaner offensive forces drawing their attention inside). Cooney had looks and took them, then simply missed.

“This is the first time this year that I can remember that he got really good looks and just couldn’t get the ball to go,” Boeheim added.

It’s not as thought Cooney was the only one missing shots. If it weren’t for Michael Gbinije hitting three of his six shots from distance, this team shooting performance would have had even more of an odor to it. Kaleb Joseph missed twice from downtown, and B.J. Johnson added another miss.