A quick take on Syracuse’s 69–50 win over Colgate on Saturday evening:

WHAT HAPPENED: Syracuse overcame a poor offensive showing (37% from the field, 29% from downtown, 43% from the line) to swarm Colgate into submission. The Orange defense, particularly the press in the first half, helped SU put some distance between them and a feisty Raiders team, then hold them at arm’s length the rest of the way. 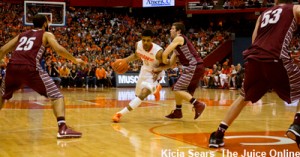 ANALYSIS: Boeheim’s said repeatedly that it’s a process with this team as it tries to replace the playmakers it lost from last year. That was more than apparent tonight, as the Orange offense looked disjointed and overly reliant on CJ Fair for most of the first half. Jerami Grant in particular seemed to be forcing things on offense in the first half. A win’s a win, and the defense was excellent for most of the night, but there’s a lot of work to be done as players try and settle into new roles.

HERO: While everyone in the Dome waited for the rest of the Orange to wake up from what seemed like a pleasant mid-afternoon nap, it fell on Fair to keep the Orange close early on. For the first 8 minutes of the game, he was the only SU player with a field goal, and spent most of the game scoring more or less at will. Fair finished with 20 points and 7 rebounds. If not for some 3s that went halfway down and rimmed out, he could have pushed for 30 on the night.

Freshman PG Tyler Ennis also went 4-5 from downtown for 12 points. Colgate was leaving him open, and he made them pay.

ZERO: The Orange was abysmal from the charity stripe, shooting just 12-28 on the evening. Leaving that many points on the floor won’t cut it against better teams.

About Corey Mallonee 50 Articles
In addition to his editing duties, Corey covers the Syracuse football and basketball beat. He has previously worked in the book publishing industry and currently contributes to Syracuse University’s bE Magazine. Originally from Bangor, ME, Corey graduated from Syracuse University in 2007. Follow him on Twitter @CoreyMallonee.