I read the articles. I listen to the commentators. I hear the chatter. There’s something wrong with Syracuse’s offense. Yep. But it’s not “lack of effort,” or “lack of movement,” or “poor shot selection,” or “poor point guard play,” or our opponent’s zone “besting Syracuse at their own defensive scheme.” No, Syracuse’s offensive woes are much simpler. We stink at shooting. We do. We really, really do.

Against a wretched DePaul defense, Syracuse shot 26-67 (38.8%) from the field and 2-18 (11.1%) from three. And while this was a particularly bad shooting night for the Orange, it’s far from unprecedented. In conference play, Syracuse is shooting 42% from the field (225th in the nation), 30.3% from three (289th in the nation), and they have an effective field goal percentage of 46.7% (250th in the nation). Numbers those bad are usually the result of a team settling for and being forced to take highly contested, low percentage shots. But that’s not what’s happening with Syracuse.

When teams zone the Orange, they give them open looks from three and Syracuse misses. I’ve heard people suggest that if the Orange can’t make those shots, maybe they shouldn’t take them. Well, first off, you take the best shot you can get and often times that’s an uncontested three (rather than a highly contested 12 footer that gets blocked), but even when the Syracuse offense gets good ball movement, penetration, and second chance opportunities, they’re still not making shots. They’re missing a lot of long balls, but they’re also missing mid-range jumpers, layups, and dunks. And while Brandon Triche’s 2-18 clip from three over the past five games has gotten everyone’s attention, he’s not the only player missing shots. Everyone is.

Trevor Cooney had three open looks from three against DePaul and he missed all three of them. His first look came when Michael Carter-Williams penetrated into the lane, drew the attention of three DePaul defenders and hit Cooney on the wing for an open, in rhythm look. Clank. 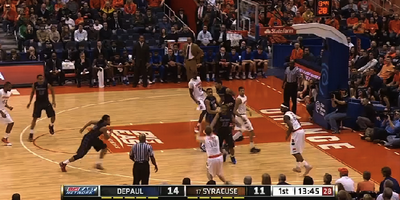 As the first half came to a close, Triche penetrated under the hoop and kicked to Cooney in the corner for another largely uncontested three. Clank. 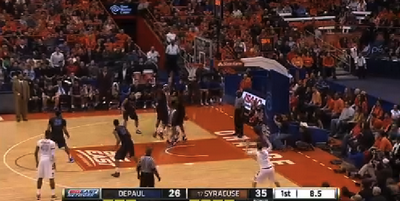 But Cooney, everyone’s favorite whipping boy (or at least my wife’s) wasn’t the only one throwing up bricks. Syracuse’s best shooter, James Southerland shot a paltry 1-10 from deep against DePaul. Some of those shots were rushed and forced, but many were wide open. Here’s another play where MCW penetrates into the lane and kicks out to the wing, where Southerland promptly misses an open three. 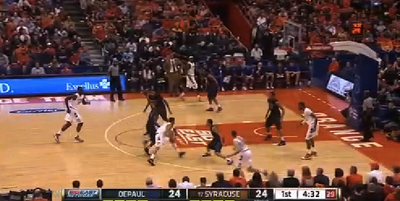 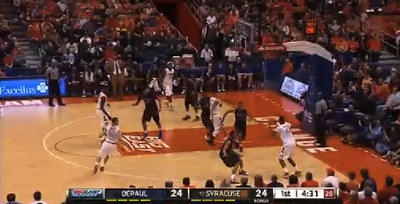 Southerland’s shooting struggles continued in the second half, no matter how wide open he was. 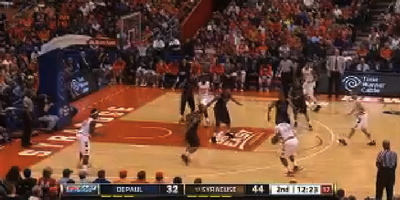 Brandon Triche didn’t take nearly as many jump-shots as Southerland did, but didn’t shoot them a whole lot better. On this play, MCW penetrates into the heart of the defense, drawing the attention of four defenders, then hits Brandon for a wide open 16 footer. As Dick Vitale would annoyingly say, “Brick city, baby.”

» Related: Syracuse is who we thought they were 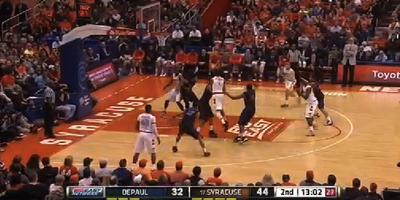 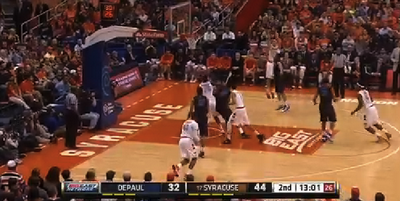 On this play, MCW gives Triche a quick outlet, finding him on the perimeter without a defender within eight feet of him. He shoots it, wide open, in rhythm, with the same result.

But it wasn’t just our jump-shooters that were struggling, even “Mr. Reliable,” CJ Fair, was struggling to make shots, missing several bunnies. On this play, MCW penetrates into the lane once again, draws the attention of four defenders, threads a pass to CJ, who blows a layup. And folks are wondering why MCW’s assist totals are down. 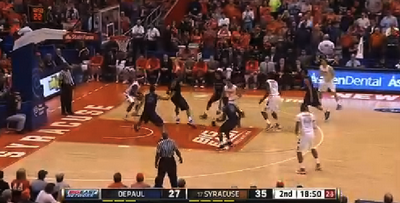 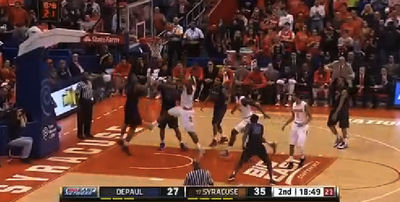 A few minutes later, Fair missed another layup, and then Rakeem Christmas compounded his mistake by blowing the dunk put-back.

» Related: A look at Syracuse in close games 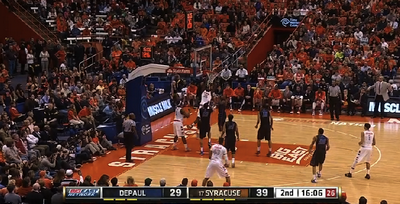 Syracuse struggled with even the simplest of shots. On this play, Triche penetrates into the heart of the defense and then feeds Christmas with an easy alley-oop, but Christmas blows the dunk. 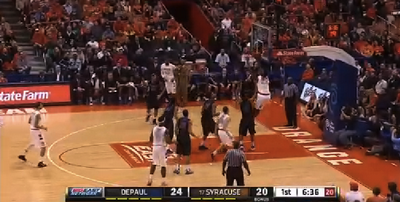 Against DePaul, it didn’t matter who was shooting or what shot they were taking, everyone struggled to make baskets, many of them uncontested and/or high percentage looks. Against the DePaul’s of the world, Syracuse might be able to get away with that, especially when they get to the line 31 times and convert 24 of those (while DePaul was just 12-24 from the charity stripe). But if Syracuse wants to make a run in the Big East Tournament or the Big Dance, they’re going to need to shoot better. Basketball is a very complex game, but Syracuse’s shooting struggles are not. They just have to start making some more shots or their season is going to end prematurely.