It was a double-digit win in the Big East. It was a win in one of the most hostile environments in the country. And yet, Syracuse can’t be happy with how they played Sunday against Rutgers. They won the game 74-64 and trailed for just 3:41 in the contest but the game was much closer than the final score indicated. Rutgers trailed by just 2 points with 3:09 remaining before the Orange went on a 10-2 run to close it out.

Maybe it’s nit-picky to be so negative over a win like this but with aspirations of a national title, the Orange had their issues yesterday. The biggest issue was rebounding. Of course. It has been the biggest problem all year. Rutgers is one of the worst rebounding teams in the Big East and Syracuse is much bigger than them and yet, the Scarlet Knights tallied 14 second chance points including 10 in the first half an won the battle on the boards, 31-26.

The player that most confounded the Orange was Peter Dinklage. Wait. I mean Gilvydas Biruta. Seriously though, those two are dead ringers for each other. 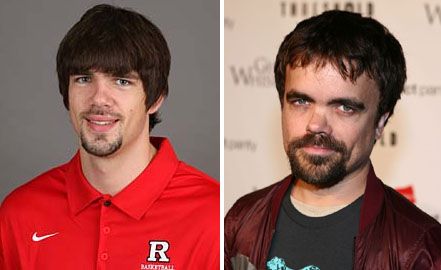 If only it was Dinklage, the 4’5 actor, suiting up for Rutgers then Syracuse wouldn’t have had such a problem on the glass. Biruta had a career day shooting 9-for-15 for 21 points and grabbing a team-high 7 rebounds. He was able to avoid Fab Melo’s shot blocking abilities by knocking down the jumper and was too quick for the Brazilian around the basket.

It was also the defensive effort from the guards that allowed for Rutgers to crash the glass so effectively. Brandon Triche, Scoop Jardine and Dion Waiters weren’t nearly active enough and allowed penetration that caused the second line of defense to commit, and that allowed for easy rebounding opportunities. Rutgers had no problem getting it into the paint and that’s what allowed them to shoot 48 percent in the first half. Maybe Syracuse was afraid of the outside shot and felt the need to stretch the zone but they have managed to do that in the past and still prevent guards from slicing through the zone.

Remember about a couple of months ago when Syracuse was the deepest team in the nation? That is still a talking point “analysts” will bring up and they will cite the points off the bench to back it up. But Boeheim, as he always does, has tightened that rotation to 6-7 guys. Rakeem Christmas starts but hasn’t played more than 4 minutes in each of the last four games; Michael Carter-Williams has played a total of 4 minutes in the last four games; and James Southerland has averaged under 8 minutes per contest in the last four while struggling mightily with his shot. But this doesn’t necessarily hurt the Orange all that much. Well, at least not when they have someone like CJ Fair go off for a career-high 21 points on 6-fo-8 shooting like he did yesterday.

It was the combination of Fair and Scoop Jardine that kept Syracuse in this game on the offensive end. Fair terrorized Rutgers along the baseline and was the recipient of three great passes from Jardine including a spectacular reverse alley-oop with 11:50 remaining in the second half.

It’s easy to say that any win in the Big East is a good win but it seems like that line of thinking has been all-too common recently for Syracuse. There was the West Virginia game where they were out-rebounded by 19 and should’ve gone to OT (you remember the missed goaltending call). There was the Georgetown game that went to OT. There was the Louisville game where the Cardinals shot an uncharacteristic 5-for-19 from 3-point line and Syracuse couldn’t buy a bucket from anywhere outside the paint. And then there was last night. Maybe these close wins are a sign that this team can overcome anything and is built to win the close games. Or maybe these close games are signs of weakness that need to be corrected quickly before they result in an early tournament exit. Just 3 more games remain in the regular season, so time for making corrections is quickly running out.