This is going to be a new monthly letter to all of you, reflecting on the past month, and looking forward at what’s to come in the world of Syracuse athletics fandom. 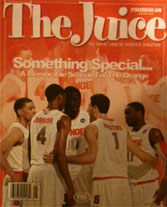 As the weather gets nicer and we come out from our winter hibernation, I’m reminded that the month of May marks an important anniversary for us here at The Juice. That magazine you see on the left is the final print version, released in May of 2010.

It shows you what a difference a year can make. The lead story is about the Orange’s rise from unranked to No. 1, thanks to such players as Andy Rautins, Wes Johnson and Arinze Onuaku. The next story takes a look at an ever-improving Rick Jackson, followed by a profile on then-assistant coach Rob Murphy, finished off by Doug Marrone’s vision for a turnaround season.

Of course, the year has made a huge difference with the magazine going to our current online version. That being said, if the magazine were still in publication today, I think the stories would go something like this:

1. A look back at the academic year, from the football team’s revival and win in the Pinstripe Bowl, to the basketball team’s climb journey to the NCAA tournament.

2. A profile of John Galloway, who recently broke the record for most wins recorded by a goalie in lacrosse history.

3. An in-depth look at the departure of SU assistant coach Rob Murphy, followed by the homecoming of his replacement, Adrian Autry.

4. A look at the football team based on its performance in the spring game, and what to expect from the team this fall.

5. A look at how the athletic department plans to move forward with its recent changes (Scott Sidwell, Chris Gedney, Floyd Little).

In the meantime, we’re always looking for feedback and suggestions so we can make this a great source of Orange sports news. We’re also always looking for people to contribute to the site, so if you’re interested in getting published, let us know!

Wesley Cheng is the editor-in-chief of The Juice Online. You can reach him at wes@sujuiceonline.com.

About Wes Cheng 2610 Articles
Wes has worked for Rivals.com covering the New York Knicks, as well as for Scout.com covering Syracuse athletics. Wes has also worked for the South China Morning Post (Hong Kong) and reported on the NBA and MLB for the New York Sportscene. A native of Long Island, New York, Wes graduated from Syracuse University in 2005. Follow him on Twitter @ChengWes.

12/22 with 247 Sports' Stephen Bailey Subscribe in iTunes, Spotify and Stitcher