We’ve all seen the 3-goggles gesture.

It’s been ubiquitous throughout the beginning of the NCAA tournament, as players across the country are holding an OK sign up to their eyes and looking through the circle created by the thumb and index finger after a successful 3-point shot.

The metamorphosis, allegedly, can be traced to the NBA’s Portland Trailblazers, and players Patty Mills and Rudy Fernandez according to the Wall Street Journal. As legend has it, Fernandez suffers from notoriously bad eyesight, and after a first half of a game when Fernandez struggled shooting from distance, Mills teased him that he needed to get glasses, a la Ricky Vaughn in Major League.

Well, Fernandez found his metaphorical glasses in the second half, and made the initial 3-goggles gesture toward Mills after draining a 3. A phone call was placed into the Marquette Golden Eagles and Darius Johnson-Odom, and it’s spread throughout college hoops since then.

Bunk, says Kentucky’s Terrence Jones and Doron Lamb. Both say they’ve been using it since the pre-season, long before Mills even knew about Fernandez’s vision problem.

“We just did it, just playing around,” Jones said to The Courier-Journal. “It’s just ‘threes in your face.’ We’ve been doing it ever since.”

The Courier-Journal and the Wall Street Journal got it both wrong.

Based on my own investigation and hours of research into gesture genetics, my theory is that several gestures cross-breeded, and the 3-goggles are the next step in celebratory (d)evolution. Here’s where 3-goggles really came from.

They are a mix of dumb:

No, I mean really dumb: 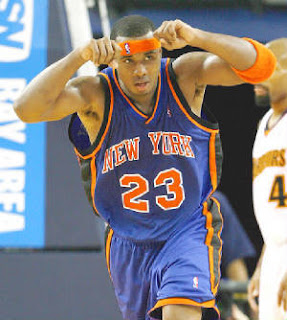 With a hint of the overused:

Plus a mix of… well, you know:

That’s all for this week, folks. See you at the same time, same place next week.

About Wes Cheng 2635 Articles
Wes has worked for Rivals.com covering the New York Knicks, as well as for Scout.com covering Syracuse athletics. Wes has also worked for the South China Morning Post (Hong Kong) and reported on the NBA and MLB for the New York Sportscene. A native of Long Island, New York, Wes graduated from Syracuse University in 2005. Follow him on Twitter @ChengWes.