“Basketball is a game of inches.” It’s an old adage, often evoked when a shot rims out (as several shots did for Syracuse against the Connecticut Huskies), but it also applies to defensive positioning. With 11:47 remaining in the second half, Syracuse led UCONN 40-39, but over the next five minutes or so, Connecticut went on a 16-6 run to take a nine point lead that they never relinquished. That run was spurred by three uncontested right sideline three pointers. Below, I break down how Niels Giffey and Omar Calhoun found themselves so open during such a pivotal stretch of the game.

After James Southerland jacked up a long, ill-advised three pointer, Baye Moussa-Keita attempted to go after an offensive rebound that he had virtually no chance of corralling. 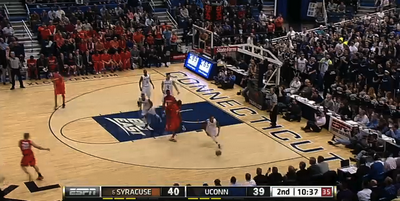 Keita’s rebound attempt left him behind the rest of his Syracuse teammates and rather than sprint back on defense, he jogged, giving UCONN a 5 on 4 semi-transition opportunity. Southerland, usually the ring wing of the zone, is forced to cover both his position and Keita’s spot in the center of the zone. 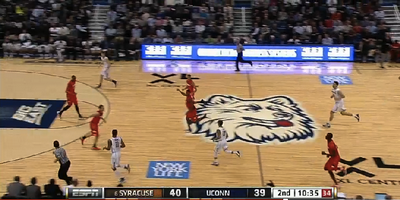 Shabazz Napier takes advantage of the unsettled situation, crossing over Brandon Triche and penetrating into the heart of the zone, further drawing Southerland into the center of the court. 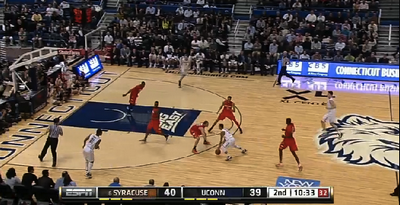 Once into the paint and surrounded by four Syracuse players, Napier finds Giffey on the right sideline for a wide-open three, putting UCONN up 42-40. A breakdown that all started because Keita failed to get back on defense and the zone never got set. 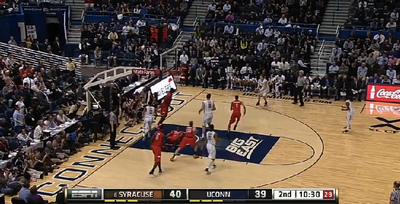 After C.J. Fair hit a jumper to knot things up at 42, Southerland botched a slide by a matter of feet, setting into motion a series of slides, that ended with Omar Calhoun knocking down another wide open three pointer from the right corner. UCONN started the play by swinging the ball from the left side of the court to the right; Michael Carter-Williams and Southerland both rotate to the top right corner, but Southerland slides up a foot or two too far, leaving Omar Calhoun alone on the sideline. 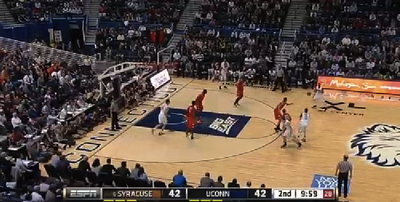 » Related: What we learned from the UCONN loss

With Southerland overextended, Keita is forced to slide into the corner to prevent Calhoun from taking an open shot Calhoun fires a cross-court pass to the opposite sideline, setting off another wave of frantic slides. 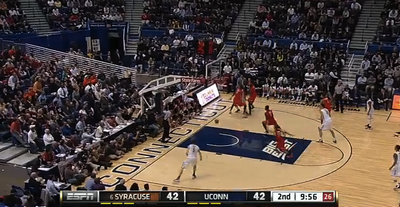 Syracuse is able to prevent the left wing jumper, but at this point, the zone has broken down and Tyler Olander receives the ball at the center of the zone, with all sorts of time. 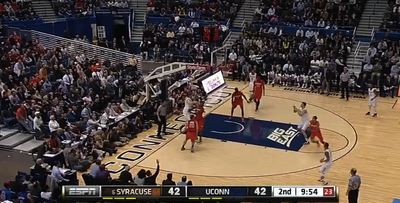 Olander, not exactly a pure shooter, holds the ball, drawing more Syracuse slides, until he finds Calhoun on the right sideline. And Calhoun is able to knock down an uncontested three pointer. It’s a chain reaction, all stemming from one overzealous slide by Southerland. 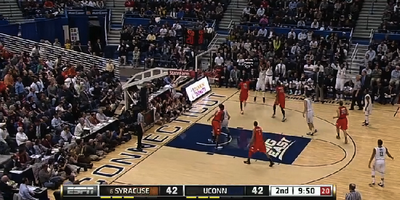 A couple minutes later, with Syracuse trailing 44-49, Southerland slides too far forward again, allowing Calhoun to get and knockdown another sideline three pointer. The play starts with a high ball screen on Triche and MCW sliding to the center of the court to prevent Boatright from getting into the paint.

Boatright swings the ball to Napier and Southerland steps forward to cut off his potential path to the hoop, but he goes too far. MCW is close enough to Napier that he still would have been able to contest his shot or shut off his drive. 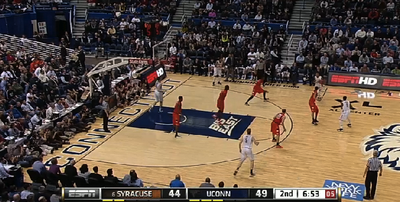 » More Inside the Play: How Southerland’s return makes a difference

By overextending himself on his slide, Southerland leaves Calhoun wide open on the sideline, Napier finds him and UCONN takes a commanding 8 point lead. 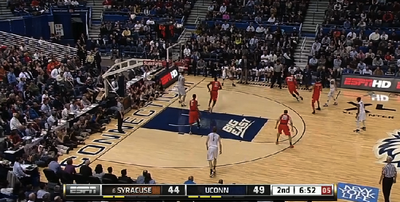 The strength of the Syracuse zone all season has been their ability to cheat their forwards on the wing up towards the top of the zone, pushing out the opposition’s perimeter players and forcing them into long, contested shots. UCONN’s ability to get penetration into the zone, coupled with some lazy defense and a few overzealous slides allowed them to get three wide-open looks from the same spot on the floor in what proved to be the decisive stretch of the game.