In the six games James Southerland was academically ineligible, opposing defenses attempted to shut down the Syracuse offense in one of two ways: with either a man-to-man defense (that clogged up the paint) or with a 2-3 zone (that forced Syracuse into taking and missing low percentage outside shots).

St. John’s spent much of Sunday’s game attempting to use the latter, but in Southerland’s first game back, Syracuse managed to shoot 53.7% from the field, including 10-22 from behind the arc. St. John’s is not an especially good defensive team and this was merely a one-game sample size, but based on what I saw, Southerland’s presence on the court, particularly his impact on the spacing of opposing defenses, helps get the Syracuse offense a lot more high percentage shots.

Syracuse repeatedly ran a set against the Johnnies with Michael Carter-Williams at the top of the arc, flanked by Southerland on his left and Triche on his right. 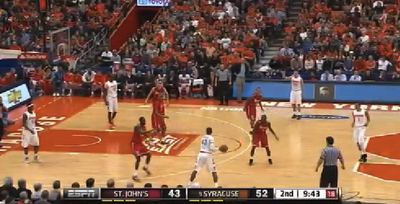 MCW’s cut to the top of the key served to screen the St. John’s guard responsible for covering the center of the court, and providing James with a wide-open catch and release look from two feet behind the three point line, dead center—a shot he’s very comfortable with. 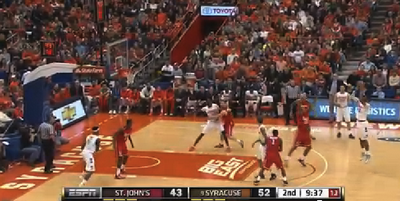 Southerland knocked down this three, as well as another one two possessions later, when Syracuse ran the exact same play. Having been burned by Southerland twice on the play, St. John’s made a defensive adjustment. As soon as Southerland started his curl, the St. John’s defender jumped the MCW screen so he could close out on Southerland in time, but by jumping the screen, he left MCW wide open at the top of the key. 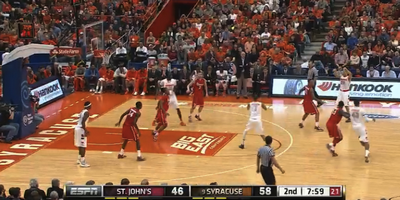 Triche was able to hit the wide-open MCW, who now effectively had a 3 on 2 with Fair and Keita. MCW penetrated into the paint, drawing help from both of the St. John’s defenders in the paint. This allowed him to hit C.J. Fair, who was suddenly wide-open for a mid-range jumper, a shot which he excels at.

» Related: Syracuse has rhythm with Southerland back

In response to this, St. John’s zone made another adjustment, cheating one (or sometimes both) of their wing defenders towards the top of the zone, so that they would have three perimeter defenders to guard against Syracuse’s three perimeter players. 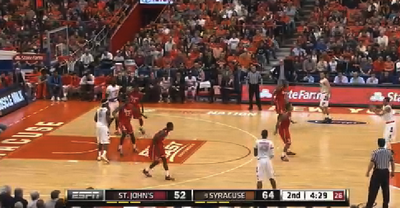 In this defensive set, Triche, MCW, and Southerland are all accounted for, but the St. John’s defenders are stretched up to and beyond the three point line, creating a lot of space inside the paint. Fair cuts to Baye Moussa-Keita’s side of the paint, drawing the attention of Keita’s defender. Keita switches to the left side of the paint. At the same time, MCW probes the top of the zone, gaining a step on his primary defender. Keita’s new defender is forced to step up to defend MCW’s potential drive and in response to the slide, MCW threads a pass to Keita, who throws down the uncontested dunk. 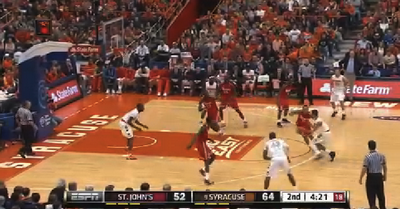 It’s one very simple set, but depending on how St. John’s reacts to it, Syracuse is able to get a variety of good looks from it… all of which stem from Southerland’s outside shooting abilities keeping opposing defenses honest. And as long as James is able to knock down open three pointers with some consistency (a feat no other Syracuse player has been able to do over the course of the season), opposing defenses will be forced to stretch themselves out to the perimeter, which opens up passing lanes for MCW that simply didn’t exist in Southerland’s absence.