It hasn’t happened the past couple games, but during our non-conference slate and into our first three Big East games, there were times when Jerami Grant, Trevor Cooney, and Baye Moussa-Keita would all check-into the game at the same time; those were bad times. Watching those lineups struggle was one of the things that inspired me to start tracking the plus/minus breakdowns of every lineup Syracuse has used over the first six Big East games. In part one of this article, I broke down some interesting trends regarding how individual players’ are contributing to the team. Below, I analyze Syracuse’s best, worst, and most underutilized lineups. 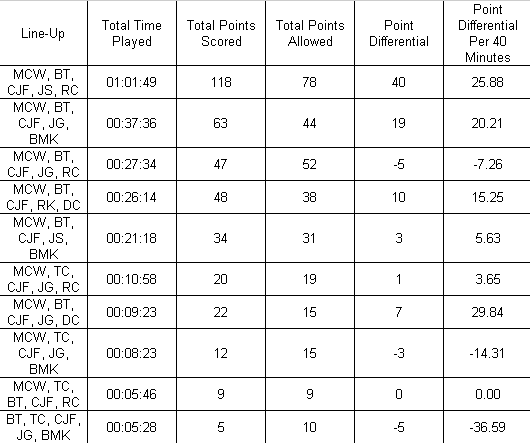 While Boeheim has used 27 different lineups over the past six games, the above table lists the 11 lineups that have played at least 5 minutes and shows how many points each lineup has scored, allowed, what their point differential has been, and the point differential per 40 minutes played (PP40).

Our Most Underutilized Lineup:

Shockingly, our most efficient lineup has been Michael Carter-Williams, Brandon Triche, CJ Fair, Jerami Grant, and DaJuan Coleman. Boeheim has only opted to use this combination three times for a total of 9:23, which is an incredibly small sample size and perhaps a deceiving one, but the numbers suggest he should use it more often. They played all of four seconds together against Villanova and posted a -1, but in 5:02 against Cincinnati, they posted a +4 and in 4:17 seconds against Louisville they posted another +4. Boeheim seems hesitant to give Coleman more minutes because of his defense, but this group is only allowing a respectable 63.94 points per 40 minutes (PP40) and their offense has more than made up for that, scoring a team best 93.78 PP40. Take away that four second stretch against Villanova, and this unit has posted an incredible +34.35 PP40 point differential… against Louisville and Cincinnati no less.

Our second most efficient lineup by the numbers and what was widely regarded as our best, is currently not an option. MCW, Triche, Fair, James Southerland, and Rakeem Christmas played 61:49 over our first three Big East games, and posted a +40 point differential. They were scoring at a clip of 76.35 PP40 while allowing a miserly 50.47 PP40. The impact of Southerland’s indefinite suspension becomes that much clearer when you take this lineup and replace Southerland with Grant. That lineup has played 27:34 and posted a -5 point differential. They’re scoring around 8 PP40 less than the Southerland lineup and allowing the opposition to score nearly 25 PP40 more. Now it should be noted that the Grant version of this lineup has faced much tougher competition than the Southerland version and that the Southerland version’s numbers are inflated by a +21 stretch against Rutgers, but it suffices to say that Syracuse is genuinely missing Southerland’s contributions on both ends of the court.

Boeheim recently called Keita Syracuse’s best defensive center and the numbers seem to support that claim. Syracuse’s go-to lineup the past couple of games has been MCW, Triche, Fair, Grant, and Keita. In 37:36, they’re posting a +19 point differential. That differential stems much more from their defense than their offense. They score at a fraction below the team average of 67.33 PP40, but have only allowed opposing to team’s to score at a rate of 46.81 PP40, better than 10 points below the team average of 57.83 PP40 allowed, and they’re doing it against top-tier competition.

When I started charting this data, one of the most shocking discoveries was the relative efficiency of our starting lineup. I assumed that their offensive numbers would suffer because having Christmas and Coleman on the floor at the same time, clogs up the paint, and makes it difficult for MCW and Triche to get penetration. And I figured their defensive numbers would also be poor, because Christmas is much better defensively playing center, than he is on the wing. But in 26:14, Syracuse’s starting lineup has posted a +10 point differential and they’re scoring and defending at above average clips (73.19 PP40 and 57.94 PP40 allowed). I don’t have a logical explanation for this, and it’s possible that like many of these stats, the sample size is still too small to be statistically significant, but still, I’d like to see Boeheim give this group a few more minutes.

With Syracuse’s offense struggling mightily against Cincinnati’s zone, Boeheim opted for a three-guard lineup, playing MCW, Triche, and Cooney together for (what I think was) the first time all season. They played alongside Fair and Keita for 90 seconds and with Fair and Christmas for 5:46. It’s a small sample size, but during that stretch those two lineups posted a +2 point differential, scored at a better than average clip (77.06 PP40) and didn’t defend quite as poorly as they appeared to (giving up an average 66.05 PP40). Boeheim said he didn’t like their defense and I agree, but we’re going to see a lot more zone this year and when we do, we need guys who can knock down shots, so perhaps playing a three-guard lineup in selected circumstances might be something Boeheim should revisit.

If you read part one of this article, you probably know where this one is headed. Of the 11 most utilized lineups Boeheim has used, only three have posted negative point differentials. Trevor Cooney has been a part of two of those, while the other two lineups he’s played (that have posted 5+ minutes) are +1 and even. Boeheim’s least efficient lineup to play over five minutes in the past six games has consisted of Triche, Cooney, Fair, Grant, and Keita. It’s a small sample size, but they’ve scored at an abysmal clip of 36.59 PP40, while surrendering a -36.59 PP40 point differential. For this team to be a true Final Four contender, Cooney has to get better (especially with Southerland gone). And I think he will; he already is. Against Cincinnati, he played (a Big East high) 18 minutes, and posted a -1 point differential. That’s not great, but that means in a close game in which we trailed for significant portions, he wasn’t a huge liability. Not a huge liability—I’ll take that going forward. Just don’t stick him on the court with Grant and Keita again.

Plus/minus statistics and point differential is an inherently flawed statistic. It doesn’t take into account the opponent, home or away, and with a small sample size, it can give screwed up readings based on a variety of factors, including outlier events (like Bryce Cotton’s first half against us). It’s important not to draw conclusions solely from the data, but rather, use the data to help support the things your eyes are telling you. Take Trevor Cooney: his plus/minus numbers are rough, but ultimately that’s more a consequence of whom he is subbing in for (Triche or MCW – two outstanding players, both of whom may find themselves in the NBA next year). Plus/minus is relative. It’s not that Trevor is so bad, rather, it’s that Syracuse is much worse when he’s in the game, largely because that means Triche or MCW is not.

That three-guard lineup supports this idea. Cooney, subbing in for Grant, and playing alongside Triche, MCW, and Fair, was part of a positive lineup against a very good opponent. This had much more to do with who he was playing with and less about how he was playing. The plus/minus stats are more a measure of comparing different lineups to one another and/or what happens when one player subs for another. In that sense, it’s important to note that when people suggest that Cooney might make up for the loss of Southerland, they’re largely mistaken, since they play different positions and Cooney wouldn’t be subbing in for Southerland, he’d be replacing Triche or MCW. The reason why James’ loss hurts so much is because he was capable of stretching opposing defenses, but his presence on the court didn’t require Triche or MCW or Fair to take a seat on the bench. In the same way, the data suggests that regardless of who is playing center for us, we’ll probably be okay, perhaps a little better on offense if Coleman is in for Keita, and better on defense if Keita is in for Coleman, but ultimately, what the data shows is just how important Triche, MCW, and Fair are to this team. By the numbers, whenever anyone of those three players sits on the bench, whichever lineup is on the court will immediately be less productive. The success of this team will be much more dependent on their continued contributions, rather than how the guys subbing in for them fare in limited minutes. And based on the stats, that should be cause for optimism.