There was a time when some Orange fans would argue that recruiting hadn’t dipped.

Sure, the team wasn’t winning as much and the Orange hadn’t gotten a top-50 recruit in an Orange uniform in a few years, but head coach Jim Boeheim always said he didn’t recruit based on rankings. He recruited players.

Sometimes it takes a return to normalcy to realize just how bad things were. With Justin Taylor, a four-star class of 2022 forward, joining five-star wing Kamari Lands in Syracuse’s 2022 class, the Orange have jumped to 4th in 247Sports’ composite team rankings. That’s the highest the Orange have been in a long time.

Instead, because the top players end up playing the most and determining how good teams become, it is more instructive to look at the rankings of a school’s top two recruits each year. Examine the chart below, which includes every class since the Carmelo Anthony’s in 2002, and see if you can spot where Syracuse’s recruiting swoon happened:

With one exception—Brandon Triche in 2009—Syracuse’s top recruit was consistently in the top 50 for nearly 15 years. Then the sanctions hit in 2015, and two years later Syracuse started a streak of four straight classes without a top-50 recruit.

Yes, Syracuse had some near misses along the way that would have changed this picture. From the drama of Darius Bazley turning pro and Quade Green choosing Kentucky to Isaiah Stewart deciding to follow Mike Hopkins to Washington, there were many chances for Syracuse to avoid the doldrums of 2015-2020.

But recruiting always has misses such as these. From Kenny Anderson and Stephon Marbury in the 1990s to Nerlens Noel and Tobias Harris more recently, there are countless “what if” scenarios involving top recruits over the years.

While those players would undoubtedly have improved their prospective Syracuse teams, the difference with the most recent recruiting drought is that SU had back-up plans. Had Julius Hodge not selected NC State, Hakim Warrick never would have worn an Orange jersey.

With Syracuse now reeling in top recruits once again, winning is likely to follow. The following chart shows SU’s winning % in each season since 2003 plotted against the 3-year average ranking of SU’s top 2 recruits going into that season. 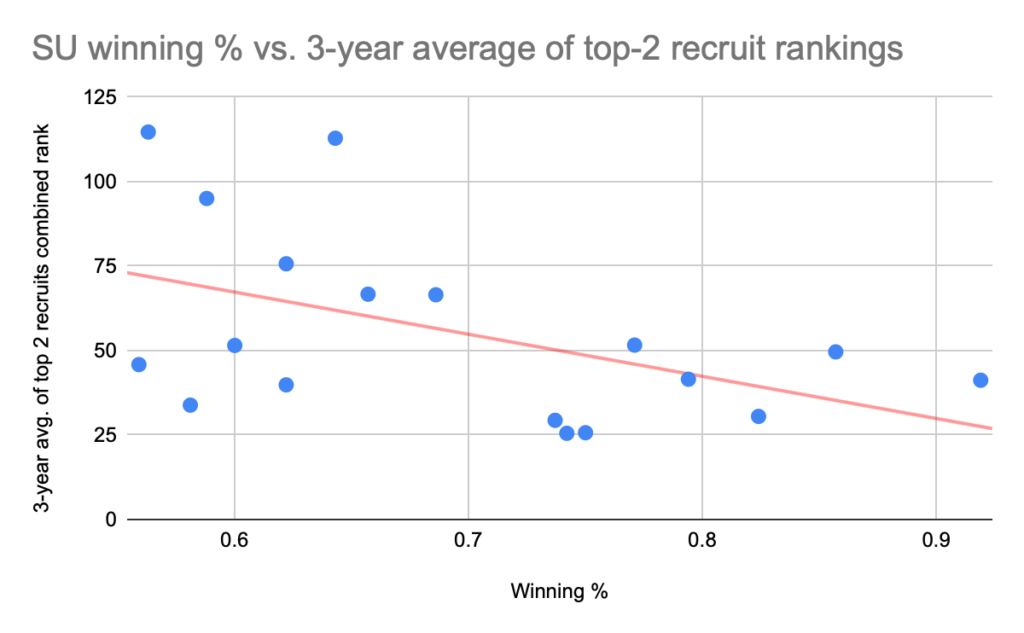