It seems like every other offseason there’s speculation that Jim Boeheim will finally loosen up his rotation and play more than seven or eight players. With such a talented, experience team, how could he not?

Boeheim himself gave legitimacy to the speculation this year in an interview to Syracuse.com’s Donna Ditota.

“You’re going to play seven or eight, but the ninth guy can get in there and play a little bit,” Boeheim says to Ditota. “The 10th could in some situations play, too.”

This led my colleague, Wes Cheng, to speculate that this year’s squad could be the first since 2011-2012 to have at least nine players appear in more than 90 percent of games while playing at least 10 minutes per contest.

But is it actually realistic to expect the Hall of Famer to finally change his ways?

The actual trends in minutes played suggest not.

For the last few years, I have tracked trends in minutes played by the rank of players in SU’s rotation. For example, last year Tyus Battle ranked first at 39 minutes per game, while Matt Moyer ranked sixth at 15.9. (I adjust the traditional minute per game statistic to account for all games to give a more accurate sense of how often the player is in the game.)

Over the last decade, the top five in SU’s rotation have seen an increasing share of the minutes played, while the bottom five have all drifted downward.

Based on these linear trends, the 7th man has seen a 70 percent reduction in minutes over the last 10 years, while the 9th man has dropped by a dramatic 84 percent. 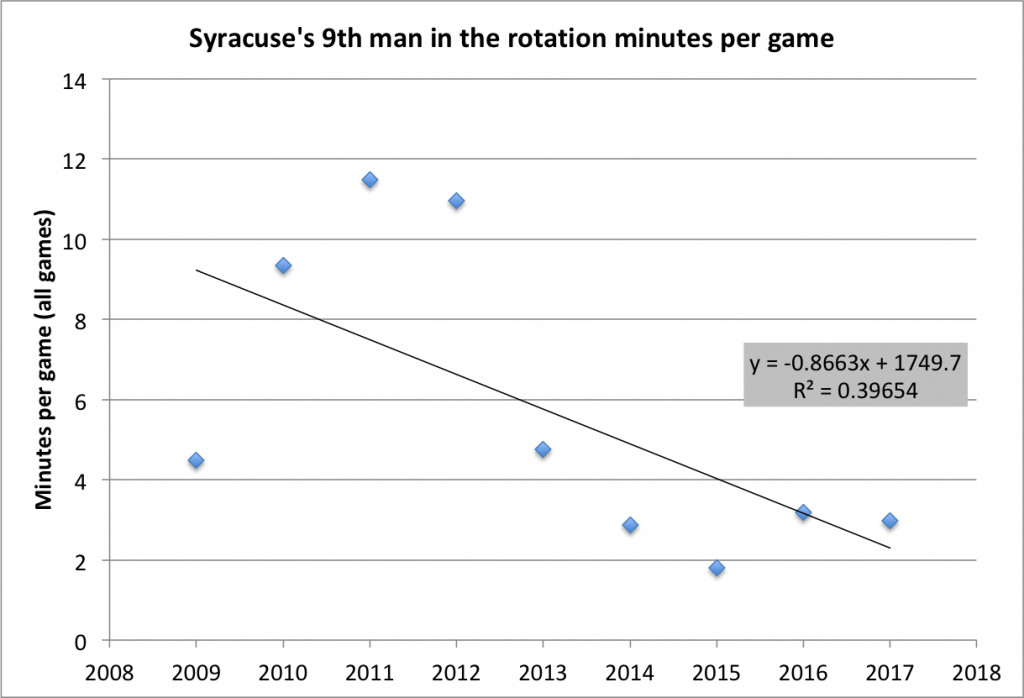 Of course, it should be noted that SU’s scholarship reduction as a result of sanctions by the NCAA coincides with the low-point of the graph above, but the trend begins before the sanctions were levied.

To put that into perspective, the best case for the 8th man would be about how much Bourama Sidibe played last season, excluding games he missed because of injury. The best case for the 9th man is equivalent to B.J. Johnson in 2014 (he was technically the 8th man that year). The actual 9th man who played the most minutes per game over the last decade was Rakeem Christmas in 2011.

Although both Johnson and Christmas saw the court in most games, they were hardly part of the rotation when it came to conference play and crunch time of big games. It’s one thing to play nine players during the early part of the non-conference schedule. It’s another to go nine deep in important situations.

This coming season Syracuse is likely to follow this model. The freshmen will see plenty of playing time early on. But when it comes to conference play – barring injury – Boeheim will tighten his rotation like he always does. 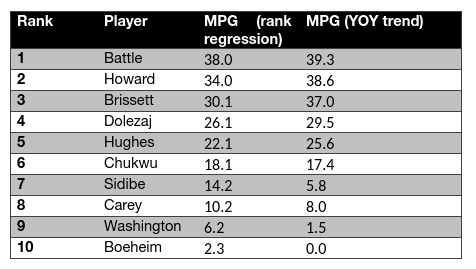 As you can see, as much as we might hope that Tyus Battle will finally get to rest after leading the NCAA in minutes played, it’s simply not likely based on Boeheim’s tactics. He hasn’t played the top player in the rotation less than 35 minutes per game since 2011, and the trend has only been upward since then.

With a highly ranked freshman like Jalen Carey and a returning point guard like Howard Washington, if any team will buck this trend it will be the upcoming season. But I wouldn’t bet on it.