Take a look at the chart below. What do you see? 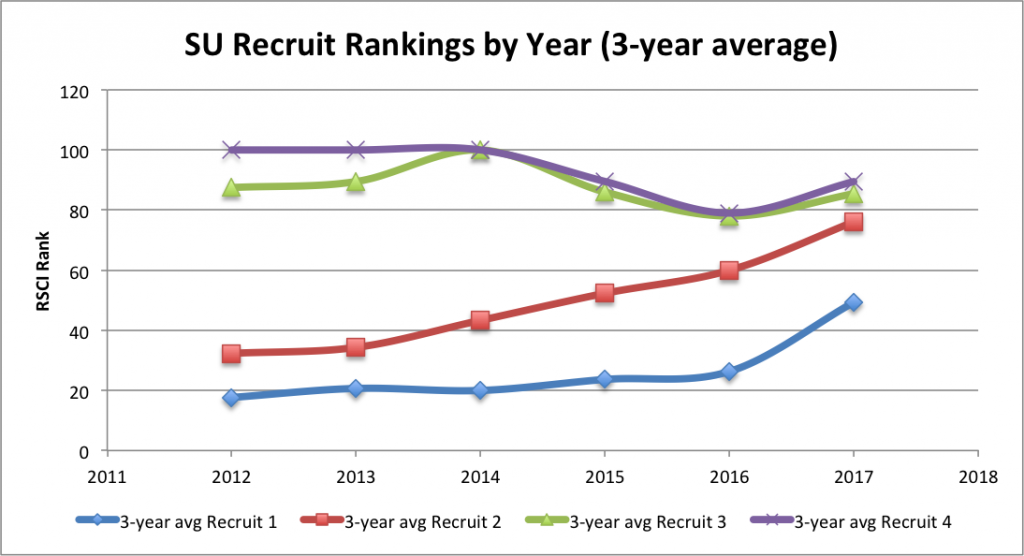 To many Syracuse basketball fans who have been disappointed at the results of the 2017 recruiting cycle, this confirms what they already suspected: Syracuse recruiting is not what it used to be.

The three-year rolling average of the ranking for SU’s top recruit has steadily declined from No. 18 to No. 49 while that of SU’s second-best recruit has dropped from No. 32 to No. 76 – all in a matter of five years.

That’s one way to look at the numbers. But it’s a small sample. Let’s pull back. 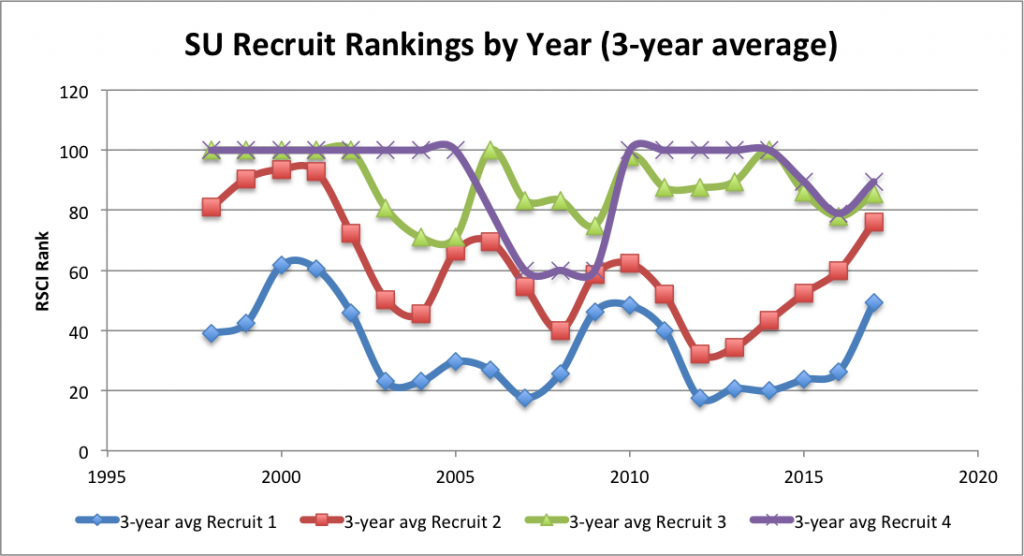 The chart above is the same data going all the way back to 1998, the first year that the Recruiting Services Consensus Index (RSCI) began combining the rankings from well known recruiting experts into a single, consensus ranking.

It’s not as easy to see a decline in recruiting now, is it?

The Syracuse men’s basketball program has experienced ups and downs in recruiting over the last 20 years, just as every program has. If we had data going back further, we would see even more ups and downs.

Some periods would be better than others. The 80s were Jim Boehiem’s heyday on the recruiting trail. He pulled in the likes of Rafael Addison, Pearl Washington, Sherman Douglas, Derrick Coleman, and Billy Owens. The 90s saw fewer big names but still several future NBA players. The 00s brought a revival headlined by Carmelo Anthony.

The point is that one or two cycles without a “top” recruit is nothing new. Even during SU’s most recent stretch of good teams the highest ranked member of the 2009 class was DaShonte Reilly at No. 85.

» Related: Do recent Syracuse draft picks tell us how Tyler Lydon will fare? 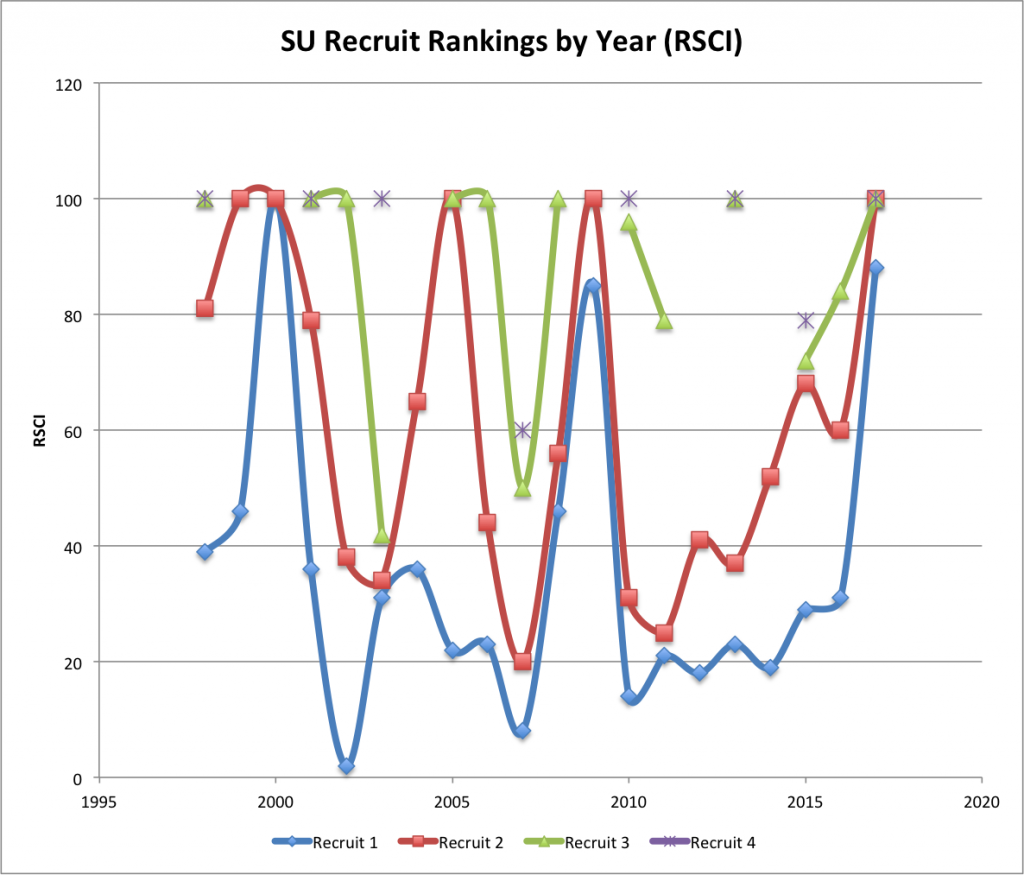 The chart above shows the actual RSCI rank of each recruit SU has had in the past 20 years (the previous chart was a rolling three-year average).

Some notes on the data: if a recruit was not ranked in the RSCI, I have assigned them a ranking of 100. The reason there are gaps in the green and purple series is that some of SU’s classes have only had two players. I left out all of the 5th recruits because they were all outside the top 100. This chart excludes transfers and ranks players based on the year they left high school, not the year they started playing for SU (in the case of red shirts).

While 2017 sticks out for having no player ranked above No. 88 (Oshae Brissett), this class is not considerably different from the 2009 class. Additionally, it’s important to note that RSCI creates its finalized rankings in June, once the recruiting services have released their final updates. As a result, many of the Orange’s signees may jump in the rankings.

For example, the most recent SU commit, Marek Dolezaj, is unknown to many recruiting services because he played in Slovakia. But he is already ranked No. 107 in 247Sports’ composite ranking, which is updated more regularly than the RSCI, and as high as No. 67 in 247Sports’ own rankings. Similarly, Brissett, the only SU commit to currently be ranked in the RSCI, is rated as high as No. 49 by 247Sports.

When all is said and done, this recruiting class may look like many others Syracuse has had recently. In fact, the overall rating of the class has jumped to No. 37 in 247Sports’ composite class ranking, which uses player’s individual composite ratings to judge schools’ entire classes of recruits.

Viewed historically, this class does not stand out at all, as shown in the chart below. 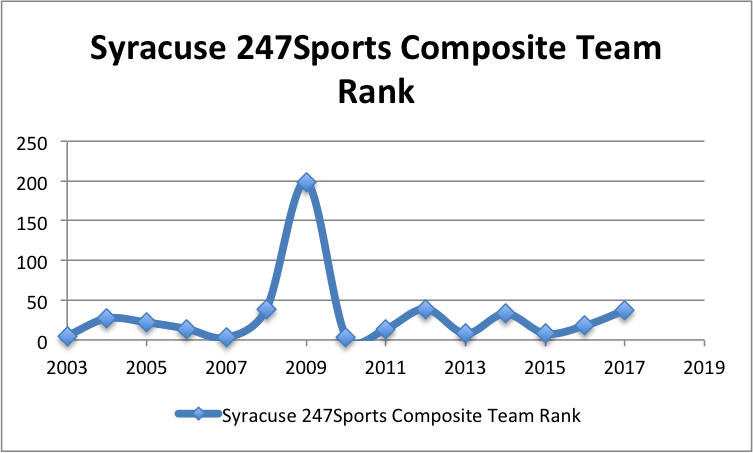 So why are many SU fans panicking about the coaching staff’s ability to recruit? There are many reasons, including some high-profile recruiting misses in the 2017 cycle and the overall disruption caused by the combination of NCAA sanctions and Mike Hopkins’ departure.

But the biggest reason is awareness. In the age of social media, sports blogs, message boards, and proliferating recruiting services, fans can not only track the recruiting process from start to finish but also interact with the recruits along the way.

It is nothing new for fans to interact with recruits via Twitter, but it’s likely that no SU recruit has ever received as many messages from fans (and sent them back) as Jordan Tucker, who committed to Duke earlier this month.

When Kenny Anderson and Stephon Marbury spurned Syracuse in the late-80s and mid-90s, diehard fans may have ready about it in the paper. But few were following these recruiting battles closely because there was no way to do so.

Now, when another highly ranked point guard, Quade Green, spurns the Orange for Kentucky, fans feel betrayed because they have followed his recruitment for months if not years.

Perhaps back then, following the Marbury and Anderson recruits, there were fans who said, “Boeheim can no longer land the big recruits.” Criticism of Boehiem has a long history.

Much of the latest criticism has focused on the Orange’s 72-year-old coach’s recruiting process and habits. He doesn’t get out on the road enough. He delegates too much to his assistants. He focuses too much on a single recruit at each position. He doesn’t show interest in every highly ranked recruit who expressed interest in Syracuse. He backs off the wrong players. He goes too strongly after others.

Some of these are legitimate criticisms. It is possible Syracuse’s last four classes would have been filled with multiple 5-star recruits if Boehiem had used different tactics.

But the fact is, whatever changes Boeheim has made in his methods, any resulting decline in ability has not yet manifested in the recruits committing to Syracuse. It’s simply not supported by the data. Syracuse has never had classes filled with three or more 5-star recruits like Kentucky.

Some might point to the disappointing regular seasons of the last three years, but these were the result of players leaving the program, not the players coming in. Syracuse has been nothing but consistent on the recruiting trail.

Some of that has to do with the assistant coaches, and it remains to be seen what impact Mike Hopkins’ departure will have. But Syracuse recruited plenty of good players before Hopkins became a coach, and every member of the current staff has contributed to landing highly ranked recruits in the last few years.

So is there a decline in Syracuse basketball recruiting? No. Before you can say that, you’ll have to wait a few more years and see that line on the chart at the top of this article continue going up. If history is any indication, it will dip back down in 2018.