It’s that time of year again. For the third year running, I will be projecting the minutes of the incoming freshmen on the Syracuse Men’s Basketball team using the power (or at least the illusion) of statistics. I use a regression model based on the RSCI composite ranking of the recruit and the returning minutes of players at his position to project average minutes played for next season.

First, let’s see how I did the last two years. The following are predicted and actual minutes per game:

If there’s two things that stand out about these results, the first is that it’s fairly easy to predict that the 5-star, stud recruits will play a lot, and the second is that we can usually predict when a freshman is going to redshirt or not play at all. We don’t need a statistical model for that.

What is difficult is predicting the players in the middle. They are on the cusp of Coach Boeheim’s rotation and could just as easily fall into a role or find a spot to warm on the bench by season’s end. As you can see from my projections on Ron Patterson, the model is not perfect at this task. But let’s look at its performance on all players going back to the National Championship season:

» Related: Michael Gbinije will be star for Syracuse basketball this season 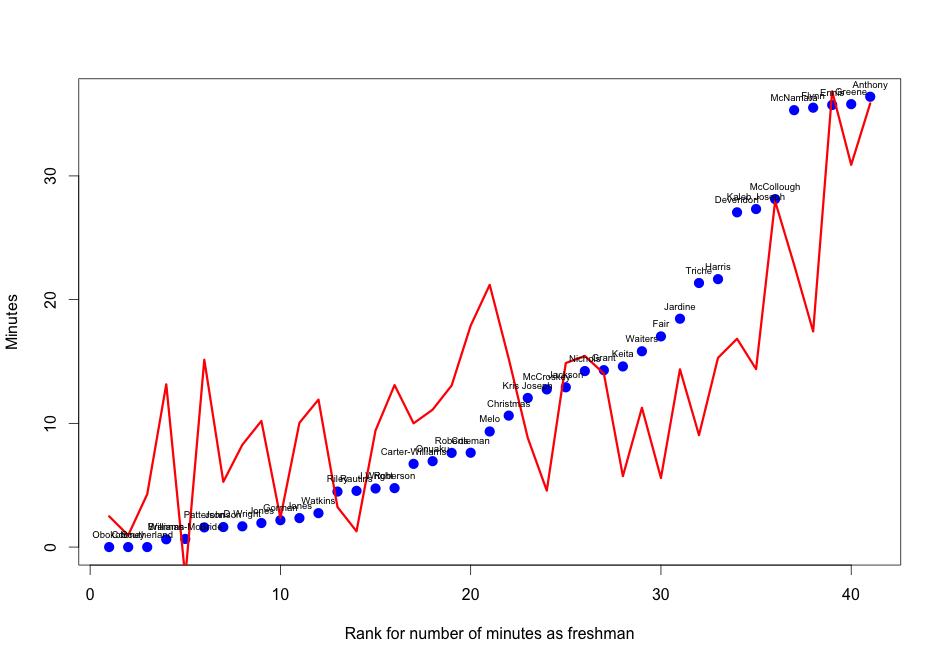 There is a fair amount of noise in the middle, but the projections often capture something that we overlook when we examine the team without data. Take Joseph, for example. A season after Tyler Ennis averaged more than 35 minutes per game as a freshman point guard, it was easy to imagine Joseph at least cracking 30 as the only true point guard on the roster.

What does the model have to say for 2015-2016? Despite the limited roster caused by early departures and transfers, it is not optimistic for freshmen playing a starring role:

Perhaps most surprising is that the McDonald’s All American Malachi Richardson is projected to play less than 15 minutes per game. However, when you look at the numbers, it’s easy to see why.

Despite his pedigree, Richardson is hardly the 6th-best ranked freshman to come to Syracuse in the last five years. He is outranked by Rakeem Christmas (#21), Michael Carter-Williams (#25), Dajuan Coleman (#18), Tyler Ennis (#23), and Chris McCullough (#19). He might belong in this echelon, but he will have to prove the high school scouts wrong.

Additionally, the model thinks he will face a logjam at his position. He could either spend time at shooting guard or small forward. Those positions are locked down by returning seniors Trevor Cooney (37.3 minutes per game), and Michael Gbinije (35 minutes per game). Of course, Gbinije will spend time at point guard, too, but the model cannot divine how much of Joseph’s playing time Gbinije might take.

How closely related are RSCI ranking and returning minutes to the playing time of incoming freshman? The two plots below illustrate the relationship along with a logarithmic regression line: 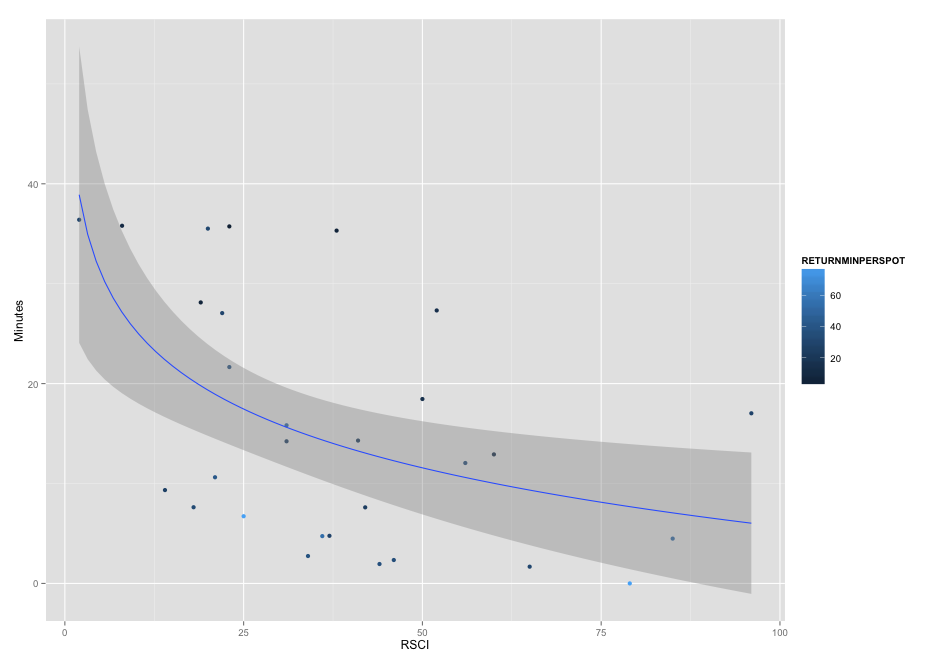 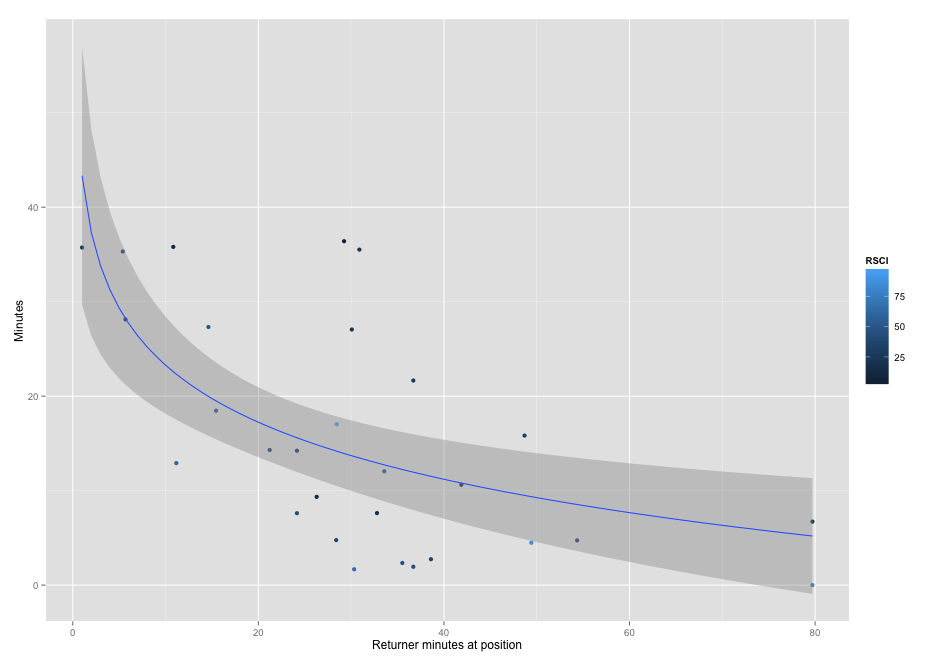 In both cases, I have only included players ranked in the top 100 of the RSCI rankings because the composite does not include those outside that range. When the model is extended to include those, the relationship is similar with more variation among low-ranked players.

Moustapha Diagne (#68), Tyler Lydon (#72) and Frank Howard (#79) are closely clustered in this year’s high school rankings. As a result, all things being equal, their playing time will depend much more on who is in front of them than their prowess in high school.

Howard has the most difficult path. He will play behind two senior leaders, Gbinije and Cooney, as well as a second-year point guard who averaged more than 27 minutes per game, Joseph. Richardson will be battling for minutes at the 2 guard, so Howard will need to prove he can fill in for Gbinije if Joseph falters. This is an unlikely scenario and the reason why the model projects him to play redshirt-esque minutes.

Diagne, on the other hand, could easily end up playing the most minutes of any of the freshmen. He could find time at either the 4, behind Tyler Roberson, or at center, backing up Coleman and Chino Obokoh. Coleman’s health issues and Obokoh’s inconsistencies give a very real chance that Diagne could end up starting games at center. Nonetheless, based on historical performance, he is more likely to be a role player off the bench between 11 and 12 minutes per game.

As a tall 3-point threat, Lydon brings an element that Syracuse has lacked in recent seasons. That makes him an intriguing player, but it doesn’t guarantee he will find playing time with Roberson in front of him.

If Roberson does find the bench – and that happened plenty of times last year – Lydon could be ready to step in. The model is slightly more optimistic for Diagne in this role than Lydon, but in reality it will come down to matchups. If Boeheim wants to go smaller and stretch the floor, Lydon will play. If Boehiem wants to go big and bang on the boards, Diagne will get the nod. It is easy to imagine them reaching the combined 19 minutes per game the model predicts.

How will this year’s freshmen rank in terms of all-time freshman stars? Based on the model, they are unlikely to be the next Tyler Ennis or Carmelo Anthony. The chart below shows their projections against the actual minutes played by SU freshmen: 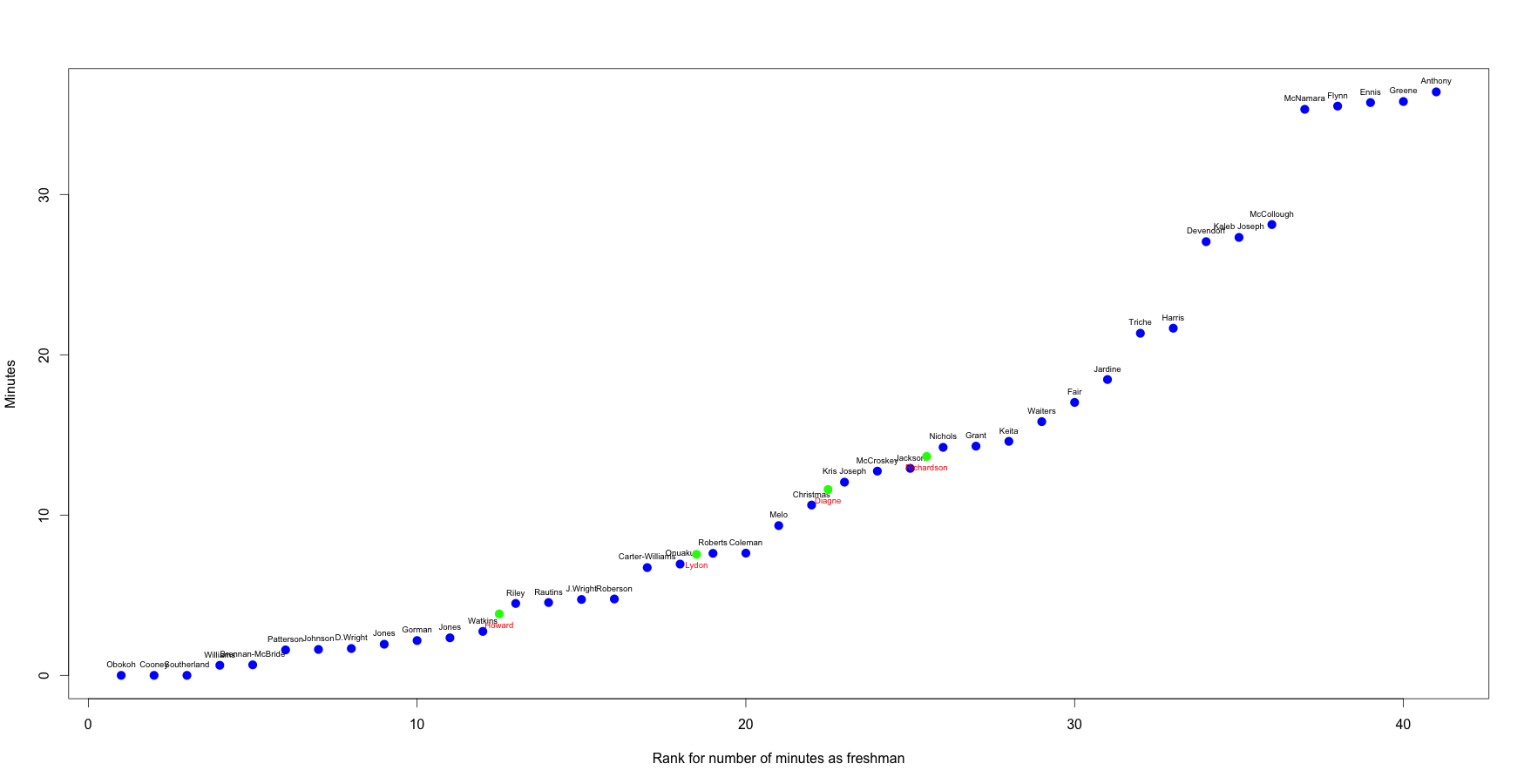 Most interesting is that Richardson ranks just below Demetris Nichols. Nichols was hardly a star coming into Syracuse but his RSCI rank of #31 is actually fairly similar to Richardson’s. Nichols developed into a star over his four years on campus and has had a lengthy and successful career playing overseas, as SU fans were recently reminded during his stint with Boeheim’s Army over the summer.

If Richardson can develop into a Nichols-style player but more quickly, the Orange will be in good shape next season.