Midnight Madness a few weeks away, and the Syracuse men’s basketball team will kick off its exhibition slate against Carleton in just over a month. After a couple of rough weeks for Syracuse football, let’s consider what we have to look forward to in the upcoming basketball season.

As in years past, I have created a regression model to predict the team’s winning percentage. The model takes into account the talent Syracuse is losing measured by minutes played last season, the talent of SU’s freshman measured by RSCI ranking, and a few other factors including the performance of last year’s team and any incoming transfers.

Unfortunately for those of you looking for good news, the model predicts that this year’s Orange will decline to a .61 winning percentage, a nadir that has not been reached since the Orange were in the NIT. While that sounds foreboding, do not lose hope just yet.

» Related: Mantra ‘next man up’ applies to 2014-15 Syracuse basketball team

As you can see in the chart above, the model got last year wrong. It predicted Syracuse would win just 70 percent of its games, but the Orange managed to win 82 percent of the time.

However, Syracuse needed only to have lost 4 additional games to drop to that 70 percent mark. Anyone who watched last season can recall at least 4 squeakers that could have gone either way. The point is that the model is more of a guide than a prediction, and there will always be some unpredictability in the way things play out.

So why are the model’s expectations so low for next year’s Orange? To start with, CJ Fair, Tyler Ennis, Jerami Grant, and Baye Keita will take 58 percent of Syracuse’s minutes played with them out the door. Syracuse has not lost a higher percentage of its total playing time in the last 13 years.

Additionally, while the SU coaching staff has gone out of its way to exult in the potential of incoming freshmen Chris McCullough and Kaleb Joseph, the model only takes into account their RSCI rankings, which are 19 and 52, respectively. The previous Orange freshmen who ranked closest to each are DaJuan Coleman (18) for McCullough and Scoop Jardine (50) for Joseph. Injuries aside, they were solid freshmen but not players you could build a team around.

It’s possible that McCullough and Joseph will outperform their high school rankings. Carmelo Anthony and Gerry McNamara offer the best-case scenario for a Syracuse freshmen forward-point guard duo. But Jonny Flynn and Donte Greene provide the sobering counter example, as they led the way the last time SU had a winning percentage as low as the model predicts for this coming season.

So what reason is there for optimism?

The last four years, Syracuse’s preseason ranking has been a fairly good indicator of the team’s potential. As you can see in the chart below, SU started the season in the top 10 and finished in the top-15 for RPI in each of these seasons. 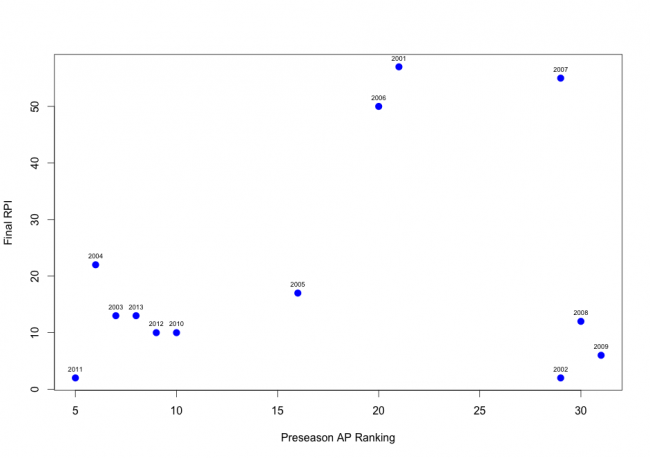 It’s too early for the preseason AP poll, but Athlon Sports recently released its preseason rankings and placed Syracuse at No. 22. This would be a decline from the previous six seasons, but more in line with a .70 winning percentage than a .60 winning percentage. Additionally, SU has cracked the top 15 three times in the last 13 years after beginning the season outside the top 25.

The reason that this year’s Orange are a good candidate to overachieve the preseason polls is the same that they’re a good bet to beat the model’s prediction. Many of players who will play key roles for Syracuse are unknown quantities, both to the model’s statistics and the national media.

Tyler Roberson came to Syracuse as the 37th ranked recruit in the country last season, but he barely saw the court because he played behind Grant and Fair. Michael Gbinije was also once a heralded recruit and should step into a prominent role after playing just 14 minutes per game last season.

On top of that, Syracuse has more experience than first meets the eye. Rakeem Christmas is the team’s lone senior, but the Orange also have two redshirt juniors in Trevor Cooney and Gbinije. And while they barely saw the court last year, the four returning sophomores have had a year to learn SU’s system. Roberson and BJ Johnson also spent the summer playing on an East Coast All-Stars in Europe.

At the end of the day, however, Syracuse’s winning percentage will depend almost as much on who its plays than how it plays. SU’s non-conference schedule will be more challenging than normal with road games against perennial powers Michigan and Villanova and home slates against St. Johns and pesky mid-majors Louisiana Tech and Long Beach State. The Orange will also take on Cal and either Iowa or Texas as part of the 2K Classic in November.

When it comes to conference play, the toughest matchups include home-and-homes against Duke and Pittsburgh, home games against Louisville and Virginia, and road games against North Carolina and Notre Dame.

The Orange have 31 regular season games, and a .61 winning percentage would imply a 19-12 record. If Syracuse can avoid upsets against lesser opponents, this full season record would imply a 3-12 record in the games mentioned above.

Despite the significant loses from last year’s squad, this prediction feels like it is selling next year’s team short. Maybe we have gotten used to success averaging 30 wins per season for the last six seasons, but I would be shocked if next year’s Orange have 12 losses entering the ACC Tournament.

If the Orange hold true to their preseason rank and win at a .70 clip or so, they would finish a more reasonable 22-9 in the regular season. When it comes to predictions, sometimes it’s better to trust your gut. I’ll take 22-9. Here’s to optimism.