Of all teams limping into the NCAA Tournament, the country probably knows Syracuse’s story best. After a 25-0 start and a 5-7 finish, it’s hard not to question ‘Cuse’s potential in the NCAA Tournament. But letting emotion get in the way of what’s really happening isn’t the best idea, and that’s why using math and analytics is the better way to see how well this ‘Cuse team can play in this year’s NCAA Tournament.

Our friends at numberFire.com (@numberFire) have run simulations to determine just how far Syracuse will go into the tournament, and more specifically, what Syracuse’s first two games in the Big Dance will look like. If you’re interested in numberFire’s powerful analytics and tools below, take advantage of a special offer of 60% off their March Madness analytics premium package with the promo code “Bracket.” Click here for more.

The opening game for ‘Cuse against Western Michigan will feature two defensive-oriented teams, though Syracuse’s is much more dominant. The biggest thing going for Western Michigan is momentum, having won 12 of their final 13 games, but the game simulators at numberFire see Syracuse winning by about 14 points, with over 92 percent win odds.

» Related: Syracuse starting in Buffalo a ‘huge’ advantage for Orange 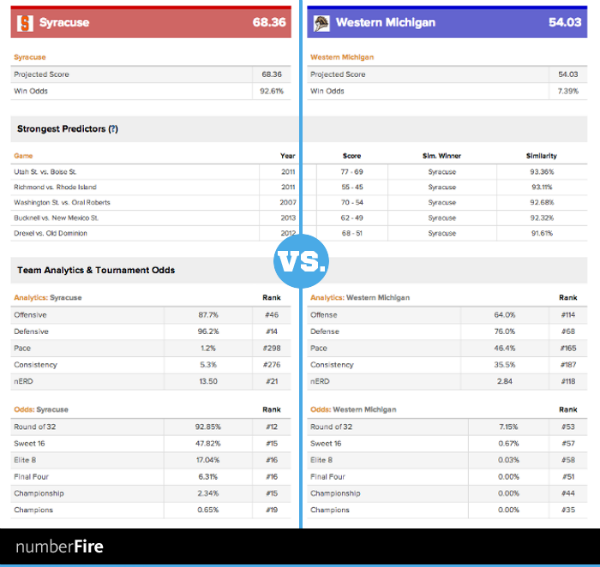 If Dayton were to upset Ohio State in their first game, ‘Cuse would certainly be expected to win that one as well. Though Dayton is an offensive-oriented team, ranking 57th in efficiency in the country, Syracuse’s defense would be too much for them to handle. numberFire gives Syrcause over a three-quarters chance to win that game, meaning Orange fans should be rooting for Dayton to pull the upset. 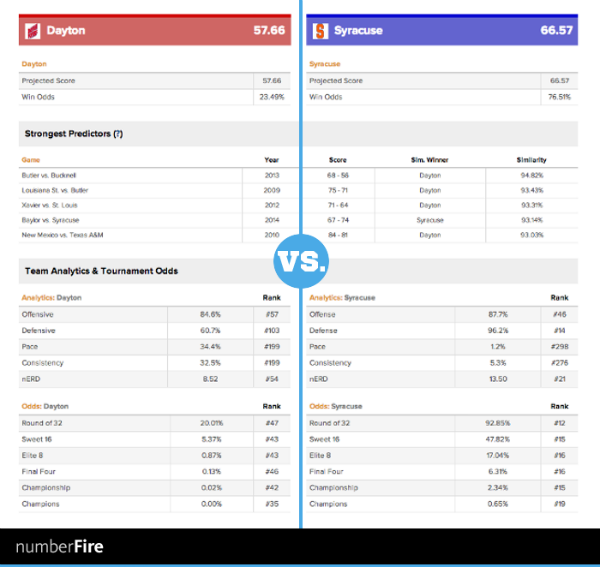 Conversely, if Ohio State were to win, things could get a little shaky for the Orange. Ohio State, like Syracuse, wins with a suffocating defense, and one that actually, according to numberFire metrics, is better than Syracuse’s. Because both teams have such studly defensive units, they run at a slow pace, most likely creating a low-scoring, close game. In the end, however, numberFire thinks Ohio State’s defense will best whatever Syracuse throws at them, winning the game by less than two points. The odds of Syracuse getting to the Sweet 16, according to numberFire, is set at under 50 percent.

» Related: Syracuse can still recover from its recent slide 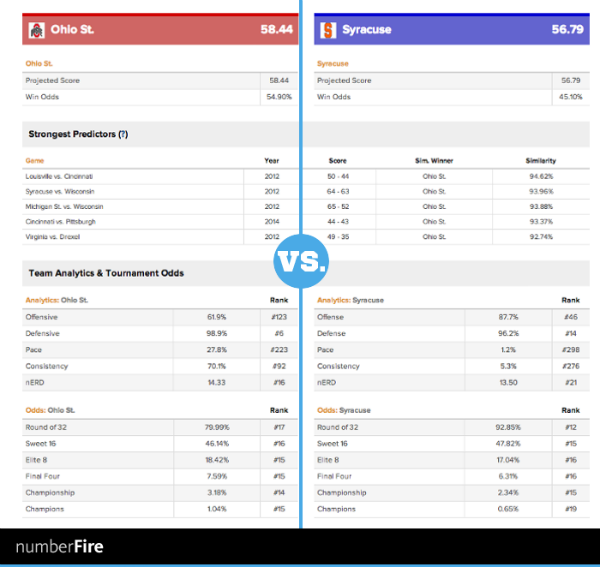