It’s that time of year again. The Syracuse men’s basketball team will open up the regular season against Cornell in less than two weeks. Coming off a trip to the Final Four last year, expectations are high. But there are also question marks, as the Orange loses three of its top four scorers and moves into a new conference.

As you can see in the chart above, the model predicts Syracuse will perform worse than last season, winning fewer than 70 percent of its games for the first time since the dismal ’07-’08 NIT campaign. The model is not perfect, as it has a +/- 7 percent margin of error, but it has correctly predicted whether the Orange’s winning percentage would go up or down in all but one of the last 11 seasons.

» Related: Boeheim should be around for at least three more seasons

While I don’t think the model will prove to be correct this season – and I’ll explain why below – it’s worth exploring why it thinks SU will only win about 21 of its 31 regular season games.

With the departure of Michael Carter-Williams, James Southerland and Brandon Triche, Syracuse lost 47 percent of its minutes played from last season. This is hardly unprecedented – the team lost 51 percent the season before and still made the Final Four. The problem is who is replacing them.

Although the model likes the fact that Syracuse has a highly ranked freshman class, it is skeptical about how many minutes they will need to play, specifically point guard Tyler Ennis. It’s basing this largely on the performance of Syracuse’s highly ranked 2007 freshman class that ended up fizzling in the NIT. Jonny Flynn played more than 35 minutes per game on that team, and Boeheim predicts Ennis will play 38.

While the thought of a freshman point guard playing nearly the entirety of every game should certainly give Syracuse fans pause, this also highlights the limitations of statistical models like the one I created. Syracuse won the National Championship with freshman Gerry McNamara at point guard, and Flynn actually performed well in ’07-’08. The problem is the model doesn’t know when Syracuse is getting a Donte Greene and when it’s getting a Carmelo Anthony.

So what else can we use to make a prediction?

The last three years, Syracuse’s preseason ranking has been a fairly good indicator of the team’s potential. As you can see in the chart below, SU started and finished the season in the top 10 in each of these seasons. This bodes well for this year’s Orange, as they are once again considered a consensus top-10 team (#7 in the preseason coaches’ poll). 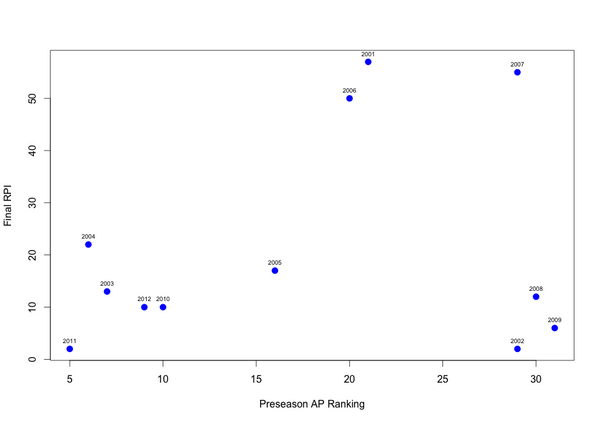 Additionally, in the last 12 years Syracuse has more often overachieved its rank than underachieved it. During that span, the Orange have been ranked in the top 10 five times and never finished outside the top 25 in the RPI. Meanwhile, they have cracked the top 15 three times after beginning the season outside the top 25.

Considering Syracuse has averaged a hair under 30 wins per season since ’07-’08, another 30-win campaign shouldn’t surprise anyone. But let’s take a look at the schedule for one final assessment.

» More from Jeff Irvine: Will this finally be the year for SU hoops?

Syracuse will play six games against teams in the preseason top 25 (Duke twice, North Carolina, Indiana, Notre Dame and Virginia). Additionally, it could play another top 25 opponent in Gonzaga or Baylor at the Maui Invitational, as well as four potential games against teams in the “Others Receiving Votes” category – two against Pittsburgh, one against Villanova, and a potential matchup with California in Maui.

SU is fortunate that all but two of these 11 are either at home or on a neutral floor. Let’s concede that Syracuse loses the road games to Duke and Pittsburgh. If the Orange manages to win about 70 percent of the remaining nine games, as predicted by the model, that’s five losses total.

Assuming the Orange manages to avoid upsets for the rest of its schedule, this would give Syracuse a 25-6 record heading into the ACC tournament. Last season I predicted Syracuse would win 23 games and it won 30. Let’s hope the Orange continues to exceed expectations.